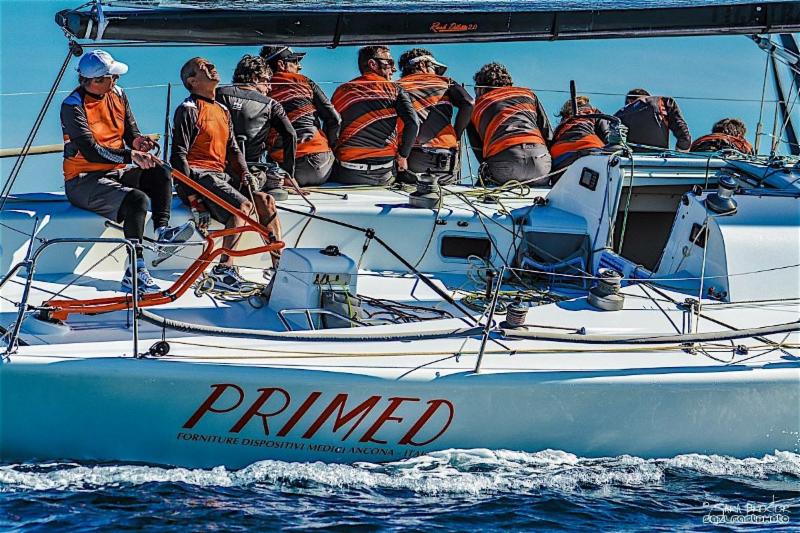 Skipper Mauro Mocchegiani is the picture of concentration as he steers Rush Diletta during the D-Marin Farr 40 Sibenik Regatta that concluded Saturday. Photo Farr 40 Assn.

SIBENIK, CROATIA – There were nothing but smiles and positive vibes after the Farr 40 class came off the water in Croatia on Saturday.

The inaugural D-Marin Farr 40 Sibenik Regatta was a real revelation – to all the sailors that participated and quite possibly the sailing world as a whole. D-Marin Mandalina Marina more than lived up to its billing as a five-star facility, the Island Zarin Channel provided a top-notch racing venue while the local residents offered a warm welcome.

“Everyone was absolutely delighted with the event as a whole. They not only enjoyed the sailing experience, but also the ambience and energy of the venue,” said Geoff Stagg, president of the Farr 40 Class Association. “There was not one skipper I spoke with who did not love this location.”

It marked the first Farr 40 class event on the continent since the 2011 European Championships, which were held in Istanbul, Turkey. Stagg credited Sena Akman, European representative for the Farr 40 Class Association, with discovering Sibenik as a viable host city with proper facilities and a superb sailing conditions.

“As a class, we owe an awful lot to Sena for finding this fantastic location and landing such an incredible sponsor,” Stagg said. “This is a big deal for the entire international sailing community because this is just a gem of a venue with unlimited potential. Most importantly, the sailing area is spectacular. It is a beautiful town and the weather is wonderful at this time of the year. This facility is simply amazing with a very professional, courteous staff. There is just so much in place here.”

Competition on the water was intense with the fleet of eight boats enjoying four action-packed days that delivered 10 races in light, moderate and heavy conditions. Principal race officer Antonio Gonzalez de la Madrid managed things beautifully from beginning to end and there were zero complaints about the on-water management.

Skipper Alberto Rossi and his Italian team aboard Enfant Terrible secured overall victory, leading from start to finish in a commanding performance. Veteran tactician Vasco Vascotto served as tactician for Rossi, who steered his familiar grey-hulled boat to first place finishes in seven of nine races in amassing a low score of 20 points.

During the post-regatta awards ceremony, Rossi heartfully thanked D-Marin for hosting “an excellent regatta” and told the audience that he thoroughly enjoyed himself. Vascotto, a perfectionist, felt the Enfant Terrible team did not come together until the final day of the regatta when it posted a 1-2-1 score line.

“Finally we sail nicely on the last day. We were not at our best early in the regatta and I was responsible for some bad tactical calls,” Vascotto said at the dock on Saturday afternoon. “We sailed much smarter, much cleaner today. As a crew, we were more focused on all the little details. We got quite good starts and just sailed the boat properly.”

Enfant Terrible was one of two professional entries along with Struntje light, the German boat skippered by Wolfgang Schaefer. Six Corinthian boats that are all relatively new to the Farr 40 class completed the fleet, which proved surprisingly competitive.

Rush Diletta, led by owner-driver Mauro Mocchegiani, impressed all in attendance with its teamwork and tenacity in claiming second in the overall standings. Tactician Matteo Ivaldi and Mocchegiani were very much in sync with each other as Rush Diletta won Race 4 and placed third in four other starts.

“We are very, very happy with this result. This is our first time competing in a Farr 40 one-design event and we did not know what to expect,” Mocchegiani said. “I am so proud of my team because we took an old Farr 40 and made it new. We raced very well and had a lot of fun. This is one of the best regattas I've ever done.”

Vascotto came away very impressed by the performance of Rush Diletta and paid the crew a high compliment by stating that it “seemed liked a pro boat.” Vascotto said the boys aboard Enfant Terrible were astounded by how often they found themselves trailing Rush Diletta.

“Our tactician called the right side of the course almost every time, the crew did a splendid job and our boat speed was very good. Everything just came together beautifully,” Mocchegiani said. “We come away from this event with a lot of confidence. We have a great group of sailors, but we know this is a very difficult class and we still have a lot to learn.”

Struntje Light saw its hopes for overall victory fade on the second day of racing when a chinese gybe caused main trimmer Massimo Bortoletto to sustain a broken leg. Enfant Terrible owner Alberto Rossi, first-class owner that he is, used his private jet to fly the injured crew member to Genoa so he could undergo immediate surgery.

Struntje Light was forced to abandon racing on Thursday and a pair of did not start results put a hurt on its final score line. However, Schaefer and crew bounced back to finish 2-2-1-2 in the last four races and salvage third place in the final standings.

“It was very important psychologically for us to finish strong. We know we have good boat speed and have seen we are very competitive,” Schaefer said.

Schaefer, vice president of the Farr 40 Class Association, was quite pleased with the product delivered by the D-Marin Sibenik Regatta and agreed with Stagg it was a great decision to come to Croatia.

“This was a very nice event in every respect. I was positively surprised by what a great place it is to race,” Schaefer said. “Our goal this year is to revive the European class and this regatta is a great start.”

Schaefer was also quite caught off-guard by the competitive level of the Corinthian entries. Skipper Carlo Naibo and his crew on Sempre Avanti finished fourth – taking line honors in Race 7 while placing second in three other starts. Pazza Idea (Pierluigi Bresciani) and MP30+10 (Luca Pierdomenico) also found their way into the top three for some races.

“I was quite surprised by just how strong the local boats are. They know the game quite well and are only going to get better,” Schaefer said.

Stagg said the performance of the newcomers should encourage other European owners to join the fray for future events.

“What happened here this week is a very positive development for the class. All the new owners are outstanding additions to the class,” Stagg said. “I'm hopeful we will attract even more new boats now that others have seen these Corinthian teams can compete with the professional ones.”

Having opened the 2016 International Circuit in spectacular fashion, the Farr 40 class now moves across the Adriatic Sea to Ancona, Italy for the European Championship. La Marina Dorica will host the regatta, which is expected to draw upwards of 12 boats. Rossi and Mocchegiani are both residents of Ancona.

“There is already a lot of excitement building for the Ancona stop,” Stagg said. “This is Alberto's hometown and I am certain he will make sure it is a fantastic event.”