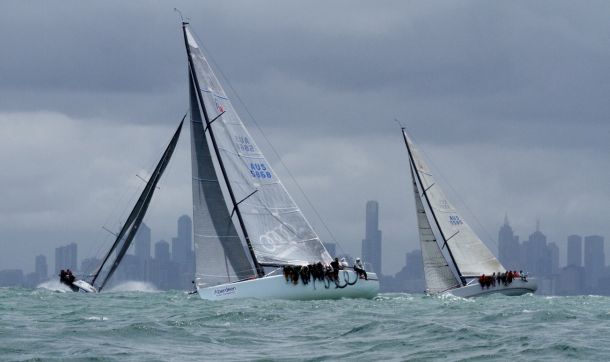 Stage two of the Australian Farr 40 2014/15 season is set to play out this weekend on Sydney Harbour, Saturday February 28 to Sunday March 1. In lieu of the cancelled Tasmanian state title, a One Design Trophy regatta has been organised sailing out of Middle Harbour Yacht Club, home of the full line-up of starters bar Voodoo Chile which races under the Royal Yacht Club of Tasmania burgee.

The class association has installed Principal Race Officer Ted Anderson to run up to five races daily starting from 1100hrs on The Sound, the area between North, South and Middle heads. Opening the regatta is the Aberdeen Asset Management invitational twilight race tonight, Thursday February 26.

It is co-owner Lloyd Clark’s turn to steer Voodoo after class President Andrew Hunn took the wheel at the Victorian state title last month, finishing second overall. Long-term Voodoo tactician David Chapman, who missed the Victorian title due to an overseas gig, returns to the campaign and says, “We are keen to defend our title from last year. Team Voodoo has enjoyed the waters of Middle Harbour in the past and hopes to continue that trend, and we are looking forward to resuming our rivalry with Transfusion. Lloyd hasn't sailed since Santa Barbara where he was first Aussie, first Corinthian and third overall at the Farr 40 West Coast champs last July.

“Any one of the fleet can take a race win. We are benefiting from Lang Walker and Kokomo taking a spell with Richie Allanson from North Sails joining us for the first time.

“As Lloyd prefers to sail with only two pros, this regatta will be our only one as a Corinthian crew. Andrew is disappointed we can’t defend our Melges 32 national title this weekend, but we feel the Farr 40 is still the top class in the country, especially with the Sydney world championship less than a year away!”

Rod Jones’ past one design experience and handy contact list when forming up a top team is delivering early success in the Queensland skipper’s first Farr 40 season with Kindergarten, bought specifically with next year’s Rolex Farr 40 World Championship in mind. A classy third in Victoria at the beginning of the month is a sure fire confidence boost as the crew ready for the second of three points-earning series prior to the season climax, the John Calvert-Jones national title, March 25-28 out of the Royal Sydney Yacht Squadron.

Though not ready to be part of this weekend’s regatta, the Farr 40 fleet has grown yet again in the lead up to the worlds with Vice Commodore of Sandringham Yacht Club Rob Davis recently purchasing Cracklin’ Rosie from the Gold Coast.

“A warm welcome to our newest owner,” offered Hunn. “Cracklin’ Rosie is set to have a big birthday and will be kept at SYC increasing our Victorian fleet to three boats in just less than 12 months, a positive sign of the class’ popularity.”