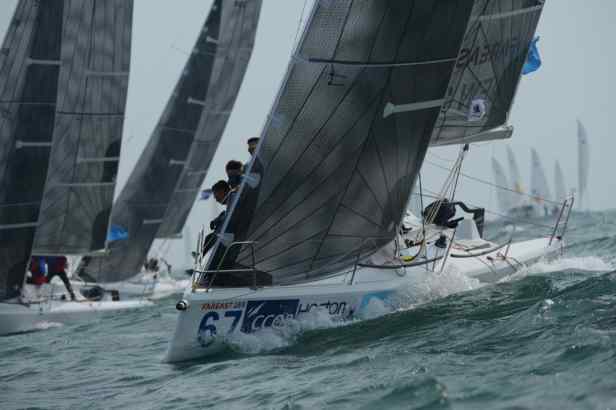 The road-blocks to greater participation in club racing include the purchase price of the boat, the lack of availability (and annual cost) of a marina berth and the need for a large crew of dependable mates.

The Far East 28R goes a long way towards solving all of these problems.

In the water and racing for around $70,000, the boat can be kept in a cradle on the hardstand or towed home behind an SUV or family car.

With a maximum crew weight of 425kg (in their undies, as the class rule specifies), it is obvious that the very large and well-designed cockpit can be operated by four or five people with ease.

The Australian demo boat is kept at Royal Queensland Yacht Squadron by importer Gerrit Veenemans, so our boat test was conducted on the waters of Moreton Bay.

I took along our Queensland advertising agent, Todd Anderson, and two of his sailing mates, Gary van Lunteren and Stuart Skinner, all of whom do a lot of IRC racing on the Bay. During the time I spent in the chase boat taking photographs, the three of them, along with Gerrit, handled the boat with ease, including when flying the decent-sized gennaker.

When I returned to the boat to make it five, we certainly weren’t in each other’s way.

When we were first towed out onto the Bay, we were confronted with a total glass-out and thought we might have to come back for a second bite. But a whisper of breeze came through, rising to around 6-8 knots, which actually gave me a good insight into the boat’s performance.

Most production boats these days handle 15-20 knots very well. Sometimes the true test of performance is better gauged in the light. So I was impressed to see the 28R pick her skirts up at the slightest puff and deliver good numbers both upwind and down.

The carbon rudder and tiller, with an innovative tiller extension that is easy to open and close, provided excellent “feel” and it was easy to keep her in the groove.

The high-aspect 7/8 rig is well-balanced and the boat glides effortlessly to windward. Under the generous gennaker which is flown from a retractable prod, downwind speed is exceptional and, in stronger breezes, would be exhilarating.

Most of the deck is cockpit. It’s a huge area for a boat under 30ft long and provides plenty of room for everyone to work without getting in each other’s way.

The layout has been well-planned and all the fine-tune adjustments are in place to give trimmers good control. However, this is also a forgiving boat and would be easy to sail by relative newcomers to the sport.

The deck gear is by Harken and Spinlock and the spars are by Selden. It’s quality stuff for a boat of this price.

The impressive-looking black sails are made from Contender Technora, giving
a nice balance between performance
and longevity.

The hull itself is polyester foam-core sandwich which is vacuum-infused and the finish is extremely good. The boats are made in the Far East factory in Shanghai and it is obvious that their production techniques are well advanced.

The Far East 28R is delivered in a 40ft container and includes a trolley (with wheels that are something like a super-sized supermarket trolley) which is all that’s required to get her in and out of the water.

However, the retracting keel also allows the boat to be easily placed on a road trailer and towed home or to regattas behind any decent-sized four cylinder vehicle. With the keel up and the mast down, it’s a tidy little package that is just over regulation width, so requires a sign when being towed.

With a weight including rig of just 1360kg, she’s lighter than an Etchells so could be lifted out at any club that has an Etchells or J24 crane on their hardstand.

More than 100 of the 28R have been produced since the Simonis Voogd design team delivered their drawings to the Chinese factory.

There is a charter fleet of 16 which races at the China Cup every year, and a number of other boats are in the hands of private owners throughout Asia. There is also a good following in Europe, where fleets are cropping up at various clubs.

Swedish sailor Kent Wretman aboard Team Grandsegel was impressed with the speed of the boat. “We bought the boat from the drawing, we’d never seen it in the flesh, and we were pleasantly surprised when we stepped aboard for the first time,” he said.

In Australia, I see this boat as an excellent entry-level racer. It will appeal to people who have been crewing on someone else’s boat and want to have control of their own destiny but don’t want to invest hundreds of thousands of dollars in a bigger yacht.

It will be very competitive against other boats of a similar size for twilights and weekend racing and the ideal situation would be for three or four club members to get together and create a small fleet that can race against each other as well as in PHS competition.

With such a racing-oriented cockpit and the good control over sail trim, it wouldn’t be out of place as a match racing boat either. Clubs wanting to expand their offering to the general public could buy a pair and set up a twilight match racing series to attract local corporates or potential new members.

The first 28R has been sold to a Sydney buyer and has been delivered, but at time of writing had not been out racing.

It’s a shame we didn’t get to experience the boat in 20 knots, where I’m reliably informed it also excels, but as I said, a boat that will pick up speed in the slightest of breezes is always an asset.

Our crew for the test were all positive in their comments about the design, the quality of the finish and the ease of handling. The overwhelming impression is that this is a good boat at an almost unbelievably good price.

Currency fluctuations may vary the affordability as time goes on, but at it’s current level of around $70,000 sail-away, I predict we’ll see more of these little gems around Australian sailing clubs over the next few years.

Significantly, Gerrit Veenemans understands that to do the job of importing a yacht into Australia properly, he needs to be full-time. An engineer by background, he has resigned from his day job and is enthusiastically following up sales leads around Australia.

With the boat able to trailered, any orders for Victoria, New South Wales and Queensland will come into Brisbane, where Gerrit will unpack, assemble and quality check all the elements before delivering by road. Orders for Tasmania, South Australia, Western Australia and the Northern Territory will be delivered to the capital city and Gerrit says he will fly over and commission the boat on site.

For further information go to www.fareastyachts.com.au or contact Gerrit on 0468 648 554.