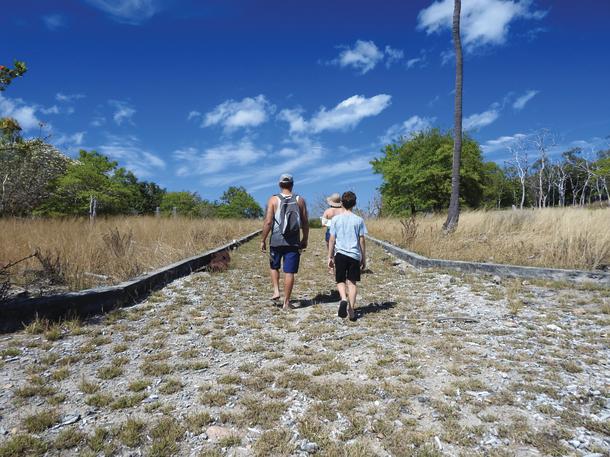 Stepping off our tender into the warm tropical waters and walking up the picturesque white, sandy beach through the trees I was not expecting what I saw next. An expansive field of white sand and concrete slabs are all that remains of the basic fibrolite huts built to house an indigenous leper colony (lazaret) that closed its doors for the final time in 1973.

The deserted site is powerfully evocative and draws you into explore and want to learn more about the people who lived here and what took place.

In January 1940, a train carrying 49 indigenous leprosy patients including Aboriginal, Torres Strait Islander, South Sea Island and Chinese descent transferred from Peel Island lazaret, arrived in North Queensland and were transported by boat to their new home joining 25 other patients at the northern end of Fantome Island.

As you begin to walk amongst the remnants of the huts that housed the patients, there is still an extensive amount of fibrolite rubble and rusted out pieces of corrugated iron. You can then follow the five metre pathway that takes you over the low-lying saddle that is still bordered by the original concrete kerb to the ruins of the church, hospital, sisters’ quarters, visitors’ quarters, grotto and other interesting artefacts.

Amongst these artefacts you will find a flagpole that still stands as tall as the palm trees but no flag flies, rusted out steel sinks and iron bath tubs abandoned, broken pieces of clay pipes, metal pipes and fittings, concrete stairs to nowhere which are believed to be the stairs into the hospital and rusted out machinery, fridge and oven.

It was said at the time that the indigenous patients were moved so they could be closer to their tribal origins in North Queensland but, the fact was, they were segregated and isolated from the white patients at Peel Island lazaret. It is believed that the poor quality and nutritionally deficient food provided to the patients at Fantome Island may well have contributed to the number of deaths that occurred on the island by 1940.

The cost to house a patient at Peel Island was £70 per annum which was a stark contrast to the £12 to £15 per annum at Fantome Island. This meant improvements could be made at Peel Island including electric lights, reticulated water supplies, radio and other entertainment for the non-indigenous patients.

Fantome Island is part of the picturesque, crystal clear waters of the Palm Island group and situated 65 kilometres north-east of Townsville. In stark contrast to the ruins on the island you will find natures tropical beauty standing out with vivid green frangipani trees with its signature white and yellow flowers, palm trees standing tall, cacti with bright yellow flowers and dazzling views of shimmering water and expansive blue skies from both sides of the island.

The abandoned settlement was once a home and community to indigenous people and the sisters and staff who looked after the patients and worked on the island. The island still holds strong ancestral ties to the few surviving former patients, their families and families of those whose ancestors passed.

They are the heroes of this story and a plaque in memory of them and in respect for those who passed away on the island was erected on the 31st of May 2010 by Bishop Michael Putney at the site of the original Mary Immaculate Church.

Fantome Island holds a lot of history of days gone by and I have not even mentioned the other colony of indigenous patients who were exiled to the southern end of the island at Lock Hospital during 1928 and 1945 due to contracting sexually transmitted diseases. That is another story and another day to uncover more history of this fascinating island.

No public ferries run to Fantome Island, you must access by private boat or charter boat. The exclusive resort on neighbouring Orpheus Island offers guests a guided tour of Fantome Island by local man and descendant Tom Martin. ≈