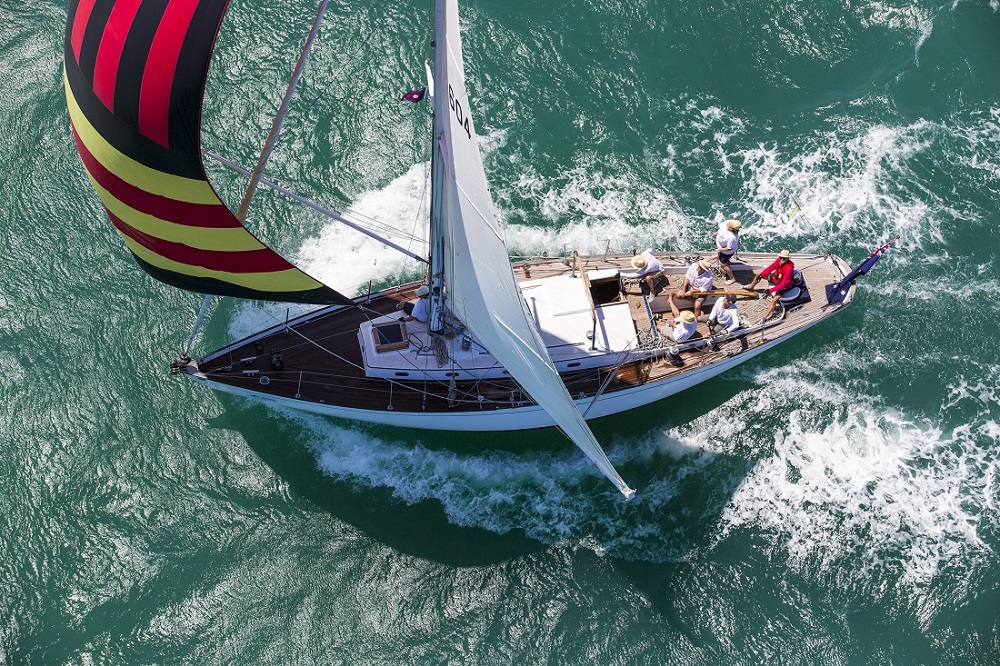 She is 60 years old this year and is spending part of her birthday tour at Sealink Magnetic Island Race Week, where the beautiful timber yacht ‘Fair Winds’ is unsurprisingly being admired by all.

Mark Chew and wife Sally Ann Balharrie are used to all the attention their Philip Rhodes designed yacht built by Abeking & Rasmussen in Bremen, Germany, receives.

“We get a lot of people want to come on board and have a look – I love that,” Chew says.

“I am her fourth owner,” Chew says of the 13 metre classic yacht which was originally built for a West-Coast American owner. “I saw her for sale in Trader Boat – the bible of dreams. I went to Auckland in 2002 and fell in love after a holiday on board. I bought her and sailed her back to Melbourne.”

“I’ve had wooden boats before and wanted another. She was designed by Philip Rhodes – a most underrated designer,” he says. “She is design number 633 and was originally built of mahogany on oak frames, but we replaced the oak with Kauri planks,” he says of the yacht which is beautifully varnished timber below decks.

Since his purchase, Chew and a growing list of friends have done a lot of sailing around Tasmania, up to Hamilton Island, up and down east coast, back to New Zealand, then up to New Caledonia. “Sally Ann is really into the sailing when we arrive at regattas,” he says.

“Four friends who came back from New Zealand with me are sailing at Magnetic Island Race Week with me.  Fair Winds lives at the Royal Yacht Club of Victoria in Williamstown, but we are away a lot of the time. We will sail back there eventually,” her owner says.

Painted white and flying an Australian flag at the stern, Fair Winds appropriately has a meticulously crafted wooden dinghy to match.

“We had an old leaky dinghy that was forever being patched, so we ordered plans for a Philip Rhodes seven and a half foot wooden pram (dinghy). Anthony Perry, a friend from Melbourne who is also here sailing with us, built it for us from goodness of his heart. It was made to sit on top of coach house when not in use – it was purposely built that way,” Chew explains.

“My boat has no auto helm, one foot pump, no hot water. It’s not an easy boat to sail. My crew are wonderful. Without them, deliveries, maintenance etc. would not get done. Chris, our navigator/tactician, and his wife Sally Clapp have helped so much.

“We did our second Hamilton Island Race Week this year and because of the 60th birthday, we wanted to do a different trip with it, and Magnetic Island fitted in well. We sailed Fair Winds up to Sydney – we do bits of deliveries in drips and drabs. We took it easy from Mooloolaba to Hamilton Island and went into Lady Musgrove and Percy Island,” the yachtsman says.

“We saw so many whales – breaching right beside us this year.  The whales have been a bonus – it’s been lovely.

“So here we are at Magnetic Island and we are absolutely loving it. It’s a different vibe. Everything is so central – we have an apartment right above the marina – 50 metres from boat. The feel of it, even on the water – everyone is so friendly. No testosterone flying, no pressure. Everyone is so helpful.

“Everyone is still trying hard to win, but there is no aggro. I am really enjoying that – and we’ve still got two more days to go. We’ve never sailed up here before; the water and location are beautiful. I love everyone being together, not spread out, and the feeling at the prize giving is relaxed. Given the right circumstances, we would come back.”

Chew also enjoyed the pleasant surprise of the Townsville Yacht Club organised barbecue on the beach at Cape Upstart prior to Sealink Magnetic Island Race Week. Totally unique to this event, around 100 people attended and dined on seafood donated by the Club.

“Competitors supplied the drinks. It was a wonderful night with a big fire on the beach, which is only accessible by water. It was really beautiful gesture,” Chew says.

Back in Melbourne, when Chew is not competing in the fortnightly classic races with Fair Winds, “We get 30 odd boats out and its competitive and getting bigger and better,” he helms  ‘A Cunning Plan’ for owner Jon Lechte, taking in local events and the odd Sydney Hobart.