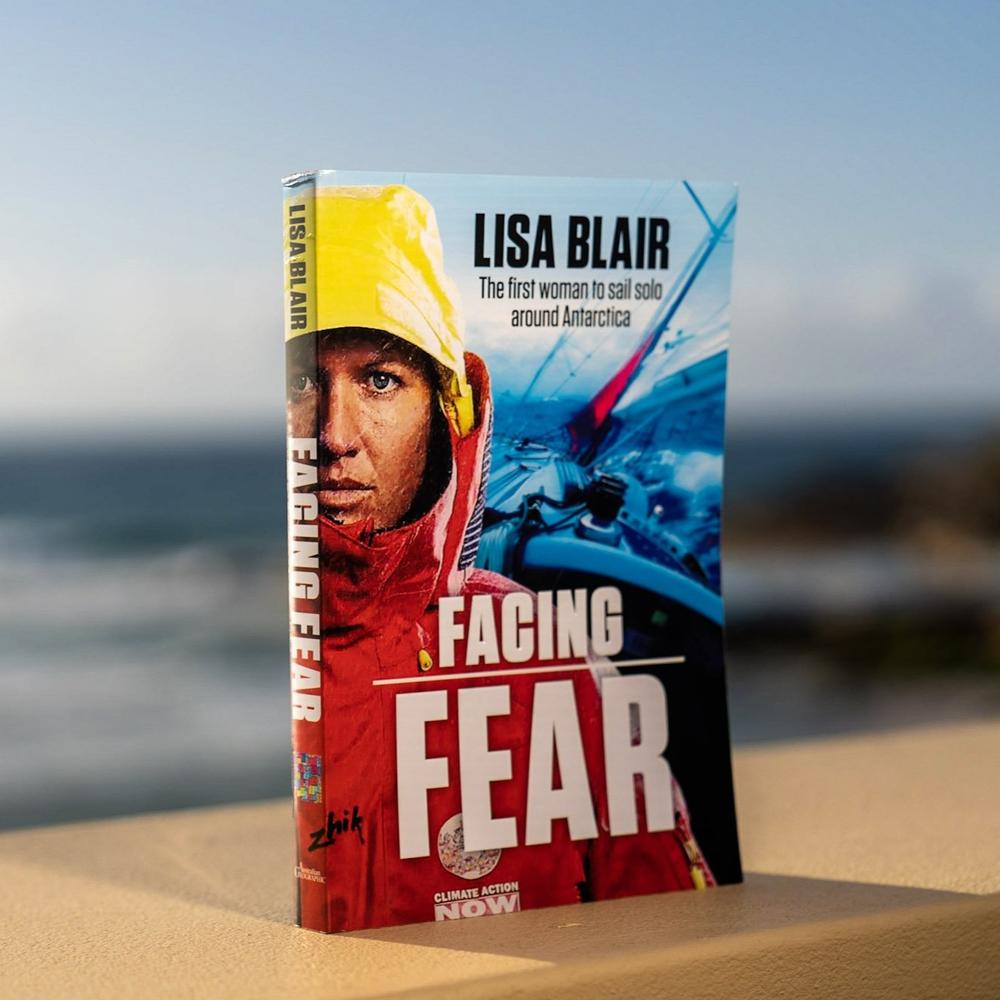 I received this book in the midday post, immediately began reading, and did not stop until I had turned the last page.

It is a book that will make you realise how small your perceived problems really are. And it may just change your life.

Facing Fear tells the story of a remarkable woman who, despite growing up on an inland farm property in Queensland, decided that she would become a sailor. Not just any sailor, though. A world-record-setting solo sailor.

There is a recurring theme in this book – do not ever give up on your dreams.

Lisa Blair decided to enrol in the Clipper Race, a 40,000nm trip around the world. She had managed to raise only half the money required, but went to the UK to train anyway. Her “can do” attitude and refusal to quit saw complete strangers offer her the money she needed to compete.

Lisa blogged for this website while doing the race and it soon became obvious that she was no ordinary person. I met her skipper in Sydney and he told me of the time she volunteered to go up the mast in strong winds and mountainous seas to retrieve a spinnaker that had become jammed. She was getting slammed against the mast and was ordered to come down, but refused – staying there until the job was done and the sail had been saved.

When the Clipper Race finished, Lisa decided she would become the first woman to sail solo and non-stop around Antarctica – staying below 45deg South at all times.

Knowing she would need solo sailing experience to secure sponsorship, she decided to enter the Solo Tasman Race, from New Plymouth in New Zealand to Lisa’s home town of Mooloolaba in Queensland. She was asked by the organisers what boat she was going to sail and she revealed that she didn’t have a boat – yet. But she would get one. It was the Clipper thing all over again!

She did manage to charter a boat, but the deal fell through shortly before it was time to sail across to the startline. To cut a long story short, I lent her my 37ft Van de Stadt cruising boat which she promptly brought back to Category One standard, sailed across the Tasman through storms, and sailed back again in the race.

Those two races merely set the scene for what the book is about – an extraordinary journey in the most inhospitable ocean in the world.

Just getting to the startline again tested Lisa’s staying power. Most of us would have given up long before. But Lisa does not give up. Not ever.

As I read of the challenges faced just getting to Cape Horn, the solo sailor’s Everest, I began reading faster and faster. I was captivated by the simple, no-nonsense writing style that matter-of-factly described gear breakages that required fixing in the dark of night, where the water temperature was 6 degrees and the air temperature not much higher.

Lisa’s accounts of waves the height of a five-storey building slamming into her little boat and throwing her around the cabin, of cuts and bruises, of anger and fear… this is riveting stuff.

But of course the best bit comes when the mast snapped, 1000nm from land, and started to beat Climate Action Now to death.

Solo sailing is not a pursuit where you can call out to someone passing by to give you a hand. And you can’t pull over to the side of the road, wait until you’ve got your breath back, and then fix what’s wrong.

Emotionally destroyed by the realisation her dream had just come crashing down with the mast, cold, sleep-deprived and not in any state to make rational decisions, Lisa was faced with sitting on the bowsprit, facing the stern, with freezing cold and mountainously high waves crashing on to her back, while she attempted to remove the split pin from the forestay, so she could get the mast over the side and save her boat.

I admit I shed a tear as I read of her hurried sat phone conversation with her shore manager, explaining what she was going to do.

“If the beacon on my lifejacket is activated, it’s because I’m in the water.”

A signal from my lifejackets’s Personal Location Beacon would be my only way to tell anyone that I wasn’t going to make it. If I fell from the bowsprit, there was no way help would arrive in time. If the beacon was triggered, I was telling Jeff I was saying goodbye…

It is this simple, matter-of-fact style that makes the book such an engaging read. There is no bragging, no over-dramatic language, no ‘poor, poor pitiful me’. Just a blow-by-blow account of what was an amazing voyage in atrocious conditions.

I have done a lot of solo sailing, so I could easily picture the scene, hear the noises of the ocean and shudder at the cold water going down the inside of the wet weather gear, or the meal left abandoned to fix an urgent problem on deck.

But I am allergic to the cold, and Lisa’s accounts of constant freezing weather, hands so numb they can’t feel what they are touching, the smelly, damp cabin and the weeks without a proper wash had me questioning a long-held ambition to sail alone around the Horn.

When you have read the book, as I sincerely hope you do, I bet you will shake your head and wonder, probably aloud, how Lisa can even be contemplating going back down there and doing it all again.

But when you think about it more deeply, you will realise that it has to be. Lisa decided to do the Clipper Race to learn how to be a sailor. She had no money, but she did it anyway. She knew she had to get some solo experience so she entered the Solo Tasman – without a boat – and did it anyway.

She set off to become the first woman to sail solo, non-stop around Antarctica and achieved only half of that goal, because of the stop in Cape Town to repair the mast. She went back to the point where the mast came down, resumed sailing through the Southern Ocean in mid-winter, and became the first woman to sail solo around Antarctica. But it wasn’t non-stop.

It is inevitable that Lisa will finish what she started.

After reading this book, I can’t wait to get out sailing again. But it won’t be in the Southern Ocean, because I’m not Lisa Blair.

She is a truly remarkable sailor and a truly determined woman.

You can obtain a signed copy of Facing Fear from Lisa’s website, https://lisablairsailstheworld.com/facing-fear for $34.95.

I strongly suggest you buy a copy today. Just make sure you have time to read it, though. Because you won’t want to put it down.