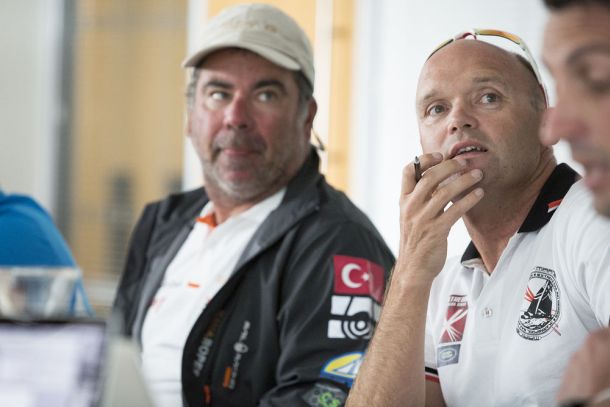 Extreme Sailing Series organisers OC Sport have today ushered in a new era for the original Stadium Racing global circuit, with the announcement of a new generation of foiling catamarans to be used as part of the event in the future.

A panel of the world’s top international sailors and sailing experts gathered at Act 4 of the 2015 global tour in Cardiff, Wales, to discuss the initial concept with OC Sport, and ultimately to have their say on what they want from a new design of boat.

“We have always spoken about an evolution of the boat when the time was right, and now with our ten year anniversary looming in 2016 its time to move,” explained OC Sport Executive Chairman Mark Turner, who pioneered the Series and the now often coined phrase ‘Stadium Racing’ when it was launched as the iShares Cup in 2007. “We were the first to bring multihulls to professional sailing in the way the Extreme Sailing Series does, and we need to keep moving with new developments in our sport to maintain our position at the top.

“We have a whole package of changes to be announced in the coming months to the event format – for now we can simply announce that we have started the development of a new class of foiling boat, with the option for sailing in non-foiling mode where the smallest of Stadiums requires it. The core of the Extreme Sailing Series has always and will continue to be Stadium Racing, captivating spectators racing just metres from the shore. Making use of our open water days to foil, or a combination of venues over the whole year that allow for foiling and Stadium Racing are all being considered.”

OC Sport Technical Manager, Neil Graham, is currently leading the design process bringing expertise gained from projects including Ellen MacArthur’s multihull record attempts and numerous Volvo Ocean Race campaigns. Explaining the driver behind the change, Graham commented: “The sailing world has evolved over the last few years, and developments such as foiling are here to stay.

“In reality, the list of other things we’d change about the Extreme 40 for a new boat is quite short, but we are considering factors such as performance in light breeze, built in media technology and a better position for the Guest Sailor so they can watch more of the action safely. The build schedule will be announced in the coming months and we are currently in the first design phase. The panel coming together is part of that process and will give us a broad-brush insight into what the sailors want in an ideal world.”

The initial group, from whom a smaller advisory panel will be formed, have been hand-picked for their unique insight into both the sport and the Extreme Sailing Series, and brings together some of the world’s top multihull sailors, who will be involved throughout the design process. Amongst them are a host of former Extreme Sailing Series champions including Leigh McMillan (GBR), and Chris Draper (GBR). Also on the panel is Mitch Booth (AUS), who was instrumental in the design of the Extreme 40, and long-time competitors on the Series Rasmus Kostner (DEN), Jes Gram-Hansen (DEN), and Hans-Peter Steinacher (AUT).

Chris Draper, who is competing at Act 4 Cardiff this week with GAC Pindar, has competed on the Series at various times since 2008, winning it in 2009. Commentating from a sailors point of view on what he would like to see, Draper said: “The Stadium Racing idea originated in the Extreme Sailing Series, with shorter courses and dynamic racing, which, I think, has made the sport more exciting. I think foiling is a natural step for the Series. The Extreme 40s were ahead of their time when they were designed, and they’re still a great bit of kit, but foiling would be fantastic. It would be super dynamic, really exciting to watch and great for the sailors and guests. Something that foiled in really light air would suit some of the venues we have in the circuit. Four, or five crew is perfect, and a boat that could fit in a container. So all the above would make perfect sense.”