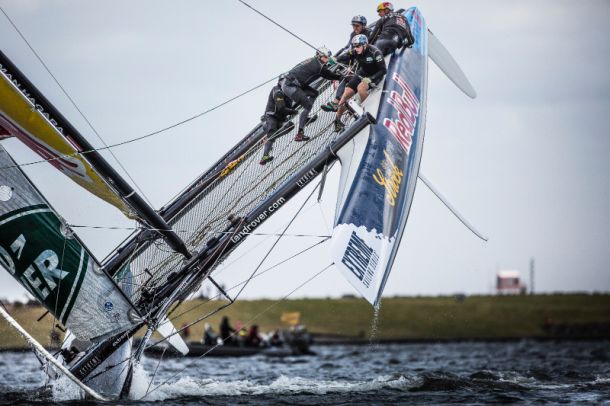 For the first time in its nine-year history, the Extreme Series is set to race in the heart of Hamburg, Germany. Nine elite-level racing teams will take to the busy waters of the River Elbe to put on their brand of city centre Stadium Racing in Extreme 40 catamarans.

In an unprecedented move in Hamburg, the four day regatta – from July 23 to 26 – will see cruise liners and other commercial craft make room for the racing on one of the tightest courses ever staged by the Extreme Sailing Series. Add strong tidal currents and the vagaries of the weather and you have all the ingredients for what promises to be a superb weekend of racing in front of thousands of fans.

International Race Director Phil Lawrence says it is going to be one of the toughest regattas ever attempted by the pioneering event in Stadium Racing. “We have been to the Douro River in Porto, Neva River in Saint Petersburg and the Bosphorus in Istanbul but nothing is quite like the challenges of the Elbe,” he said. “One thing we can promise is an exciting show for fans, many of whom will be eager to see the Extreme Sailing Series for the first time, as we squeeze nine teams on to a 600×300 metre race course.”

One crew looking to perform well in front of the German crowd after an outstanding final day in Act 4, Cardiff is Red Bull Sailing Team: “Our mindset and body set is right now on a top level. We are full of energy and the skill of our young guns on board is developing each Act,” explained tactician and skipper, double Olympic gold medalist Hans-Peter Steinacher.

A three-way fight for the overall honours at the halfway mark of the season sees just three points separate Red Bull Sailing Team in third from first place The Wave, Muscat and second place SAP Extreme Sailing Team. “The level is strong. The competition is more intense compared to the years before. SAP Extreme Sailing Team and The Wave, Muscat are the competition and we are all sailing at the highest possible level. Our focus is not on the overall ranking but as long as we win races we will finish on the top spot.” continued Steinacher.

Standing between them and the top of the podium, Denmark’s SAP Extreme Sailing Team, co-skippered by Jes Gram-Hansen and Rasmus Køstner, are having their best season to date. Posting two second place results in the first two Acts this year the team finally achieved their first Act win after four seasons with the Series in Qingdao and are tapping on the shoulder of Series heavyweights The Wave, Muscat.

“We believe in the way we prepare, practice and race. We are confident that some of the elements we have mastered this season also will come into play in Hamburg. It is not a new start, just a new event, and we are ready for the challenge,” explained Køstner, who although comfortable with their performance so far this season is taking nothing for granted: “There might be some upsets from day to day. The Wave, Muscat and Red Bull Sailing Team are strong, but it might be the moment for Oman Air and Gazprom Team Russia to make the move.”

In the battle for the middle order, 10 points behind the podium, three teams have locked horns. Gazprom Team Russia, Oman Air and GAC Pindar are again separated by just three points however the addition of round the world sailing veteran and match racing expert Adam Minoprio onboard GAC Pindar may break this pack. Rounding up the fleet newcomers to the Series this year Team Turx powered by Kaya Ropes and Lino Sonego Team Italia, who will the see the addition of experienced Extreme 40 sailor Manuel Modena to the crew.

Despite struggling with consistency in the first half of the season, each team is capable of winning races and reaching the Act podium, but a string of frustrating mistakes and gear failure in the testing conditions of Act 4, Cardiff loosened their grip on the overall podium.

Finally joining the line up in Hamburg, 20 year-old Paul Kohlhoff, a rising star of German sailing, has joined forces with one of the country’s best known and most successful sailors, Roland Gaebler, to take on some of the world’s top sailing teams on Team Extreme Germany.

With up to eight races planned each day, the action will kick off Thursday 23 July with the official media day followed by three days of racing when the Race Village, which is free to enter for the general public, opens at HafenCity waterfront.

Find out more about the onshore activities here.