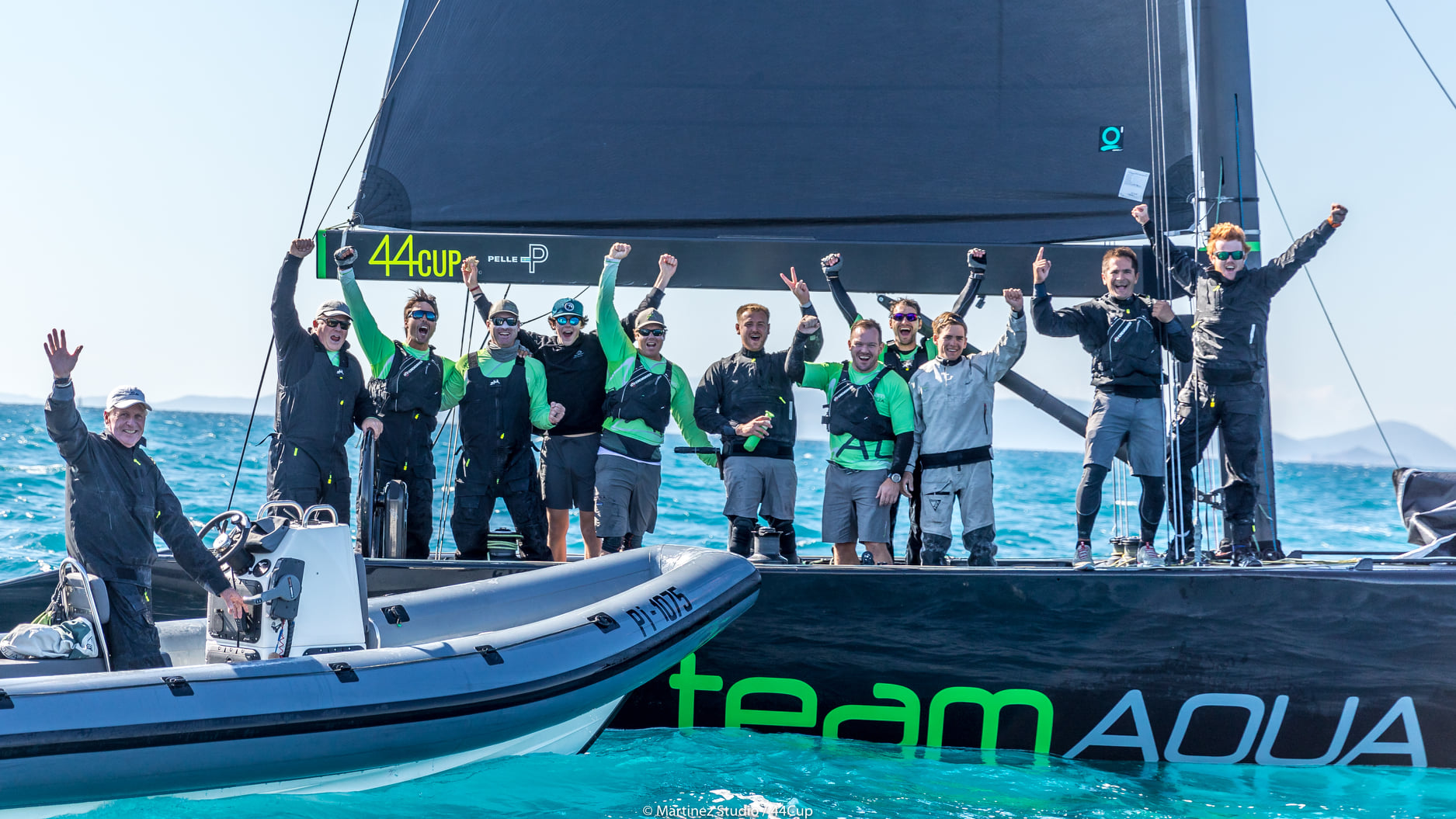 Like a final curtain call to this World Championship, as well as a reminder of how close the racing always is between the high performance owner-driver one designs, the top eight RC44s all crossed the finish line for the final time within just 20 seconds of each other after 40 minutes of racing.

Off Scarlino, it was another supreme day of sun and 15-20 knot winds, initially from the north but veering northeast.

Going into today just one point had separated the top three – Hugues Lepic’s Aleph Racing, Torbjörn Törnqvist’s Artemis Racing and Nico Poons’ Charisma. So began a day where the podium changed after each of the three races held.

A win by Team Aqua in the first race, to Artemis Racing’s third, launched Chris Bake’s team up to second, two points shy of Artemis prior to the penultimate race. In this, a wind shift, followed by a short lull, caused Igor Lah’s Ceeref powered by Hrastnik 1860 to finish almost 1 kilometre ahead.

In this second race of the day Team Aqua was second but had plummeted to eighth place on the first run, then had rocketed up the left side of the next beat to round the top mark back in second. They did well to hang on and 4 minutes 15 seconds after Ceeref, Team Aqua finished second just ahead of Charisma and Artemis Racing.

At the top of the leaderboard, this left Artemis Racing and Team Aqua tied on points, with Charisma two behind, going into the final race.

The 10th and last race of the series saw Pavel Kuznetsov’s Atom Tavatuy lead around the top mark while in the battle for the World Championship title Artemis Racing was second and Team Aqua fourth. However crucially at the bottom of the run Artemis and Charisma chose the port gate mark while Team Aqua went right.

Running their larger J2 as most were on their J3, up the second beat Chris Bake’s team benefitted greatly from a right shift propelling them into the lead. They rounded the top mark first ahead of Aleph Racing, Charisma with Artemis Racing now down to fourth.

On the final run, most of the fleet gybed early on to port, but halfway down Charisma put in a hitch to the left and when the two groups converged Poons’ team gybed in front of Team Aqua to win the final race by a hair. Artemis Racing arrived fifth dropping them to third on the podium behind Charisma.

At a prize giving in Marina di Scarlino, Chris Bake and his Team Aqua were given a rapturous applause worthy of defending champions in one of sailing’s most hotly contested classes.

“It wasn’t an easy one,” admitted Bake. “The last run of the last race of the day and it could have gone three ways between Charisma, ourselves and Artemis Racing. It was a great day of sailing.”

Of that race Bake said: “We took the right mark [at the leeward gate] which put us in the wind a little bit earlier and that gave us the shift and a little bit of an advantage. Then on the second downwind there were boats either side of us that could have rolled us, so it was really tense. The 44Cup is still as full-on competitive as it ever is. Racing doesn’t get any better than this frankly. To be able to still compete in this class is really good.”

Team Aqua’s tactician Cameron Appleton was equally ecstatic. “In this fleet on the final day, when the pressure is on, in those sort of conditions, with this sort of fleet pushing hard, that was some tense sailing – to go 1-2-2 there was nothing easy or straightforward about that. What an amazing regatta – the fleet is as tight as it ever is and we are just really pleased to have won.

“Our starting wasn’t that great this week, but on the rest of the race course we managed to do the right things at the right time. We are pleased that the guys on the boat, as always, with their familiarity and friendship, that our teamwork was on a high and pulls us through.”

Meanwhile of their killer move in the final run Charisma’s Nico Poons said: “We were fourth or fifth rounding the buoy and decided to go to the other side where there was a bit more breeze. That is how we beat the rest, and finished first, just a few millimetres ahead of Team Aqua. For a Worlds it was quite strange!”

Charisma main sheet trimmer Chris Hosking described the conditions today: “It was shiftier than a bag a weasels and there were a lot of weasels out there today! Good on Pepsi [tactician Hamish Pepper] for keeping it real. We are all dealing with the same thing – you can’t get frustrated, you just have to deal with it the best as you can and everyone did that really well today.

“This is truly one of the best grand prix racing circuits in the world – if you look at the competitiveness of all the boats. You can’t bother counting the points – you just have to sail every race as if it is the last on the earth.”

Artemis Racing was on World Championship winning form all week but saw their chances slip through their fingers in the last race. “We rounded the left gate and the right one was better, but you don’t know that. Sometimes things go your way and sometimes they don’t,” said Törnqvist.

“At the finish it was almost impossible to say who crossed the line in what place because it was so close. It will be one of the best regattas we’ll remember, because it was a World Championship and really high quality sailing and it all came down to the end of the final run.”

44Cup first timer Valeriya Kovalenko and her ARTTube team enjoyed the World Championship despite coming last. “I am happy. It was a great World Championship with great races,” said Kovalenko. Today we finished one race fifth and my team is very proud with this result. My crew is happy to be back in this class and now in the team we have a conversation about next season…”

The 44Cup continues with the final event of the season, the 44Cup Calero Marinas Lanzarote over 17-21 November.