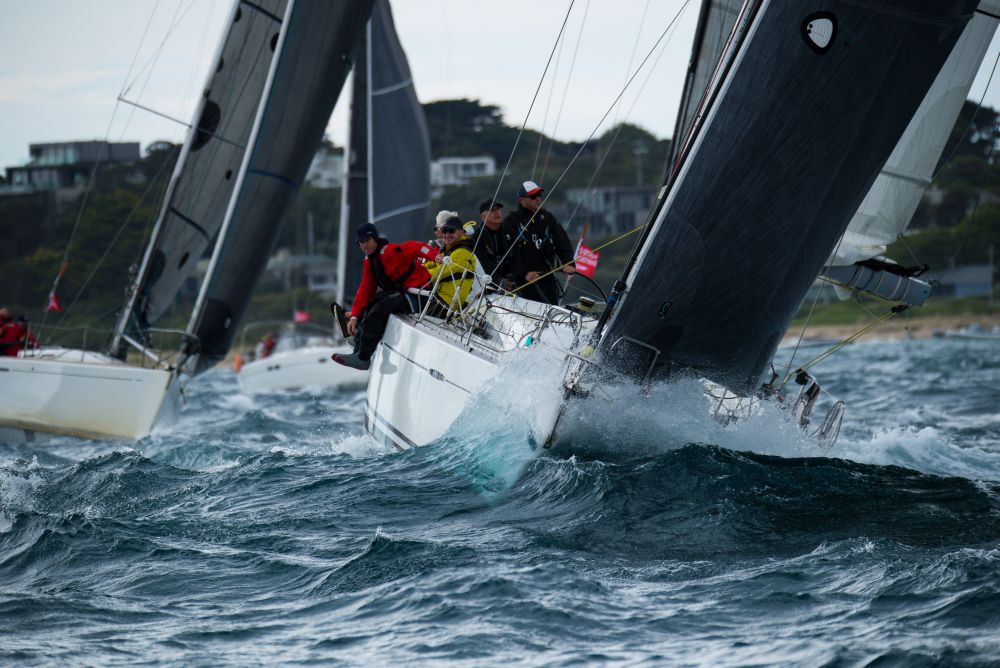 Conditions inside Port Phillip Bay were wet and wild for the start of the 2020 ORCV Melbourne to Devonport Race. Photo credit Michael Currie.

Perfect wind conditions over choppy seas greeted the 19 starters in the Ocean Racing Club of Victoria’s “Rudder Cup” Melbourne to Devonport Yacht Race this morning. Northerlies blowing 25 to 35 knots allowed for a fast reach from Portsea to Port Phillip Heads under cloudy skies with a threat of rain.

Here the fleet turned south, awaiting the forecast south-westerly of up to 30 knots to propel them very quickly towards their destination on the northern coast of Tasmania.

Paul Buchholz’s Cookson 50 Extasea started towards the back of the fleet, allowing a short-handed entry, RMS, the honour of leading across the line. How Bizarre and Faster Forward were close behind.

But it didn’t take the big Cookson long to make her mark. Fresh from a line honours win in yesterday’s Cock of the Bay, Extasea hit the lead only 1600 metres into the race and was first to turn south through the Heads. Travelling at more than 10 knots, after less than an hour of racing her lead was substantial over the following pack.

The front came through much earlier than predicted and was preceded by a short transition period of no wind at all. Boats that had flown spinnakers out of the Heads quickly dropped them and settled in for a wet and wild ride.

Extasea immediately began to lift her speed towards 15 knots, which could see her break Prowler’s race record of 19 hours, 32 minutes and 56 seconds, set in 1998 – by hours rather than minutes.

As the remainder of the fleet exited Port Phillip, two chasing packs formed. Arcadia was in second place, marginally ahead of Lord Jiminy. Audere was the third of this group which had gone further west in pursuit of the wind shift.

To the east, a second pack was led by RMS, a new Jeanneau 3600 which is being sailed by Barney Cole and Jade Walker who hope to represent Australia at the 2024 Paris Olympics in the new two-handed mixed offshore event. RMS was closely pursued by Blue Water Tracks, Summer’s Lease and Soiree Bleu.

Blue Water Tracks, owned by ORCV Commodore Grant Dunoon, headed further west than most boats, looking to pick up the westerly early and have a better angle of attack. Just before 2pm, they sent a text update, advising they were in a 25 knot westerly.

“We have the main well reefed and the self-tacking jib has six turns on the furler, so not much sail up at all. Our boat speed is 9 knots and we’re pointing directly at Devonport.”

With tactics and positioning vital in the first 24 hours of the race, favourites for the Rudder Cup, Australia’s oldest ocean race trophy, will probably not emerge until tomorrow morning at the earliest. The cup is presented to the winner of the AMS handicap category, which this year includes 17 of the 19 starters. At 3pm AEDT the leader was RMS, followed by Patriot and Arcadia. RMS had also moved into third place for line honours, behind Extasea, which had come back to the pack a little as the wind went light, and Lord Jiminy. The three boats were in sight of each other and less than five nautical miles apart.

If the westerlies continue to build, Extasea should reach Devonport shortly after first light tomorrow morning, with the rest of the fleet following throughout the day and into tomorrow night.

The fleet can be tracked at https://race.bluewatertracks.com/2020-orcv-melbourne-to-devonport.