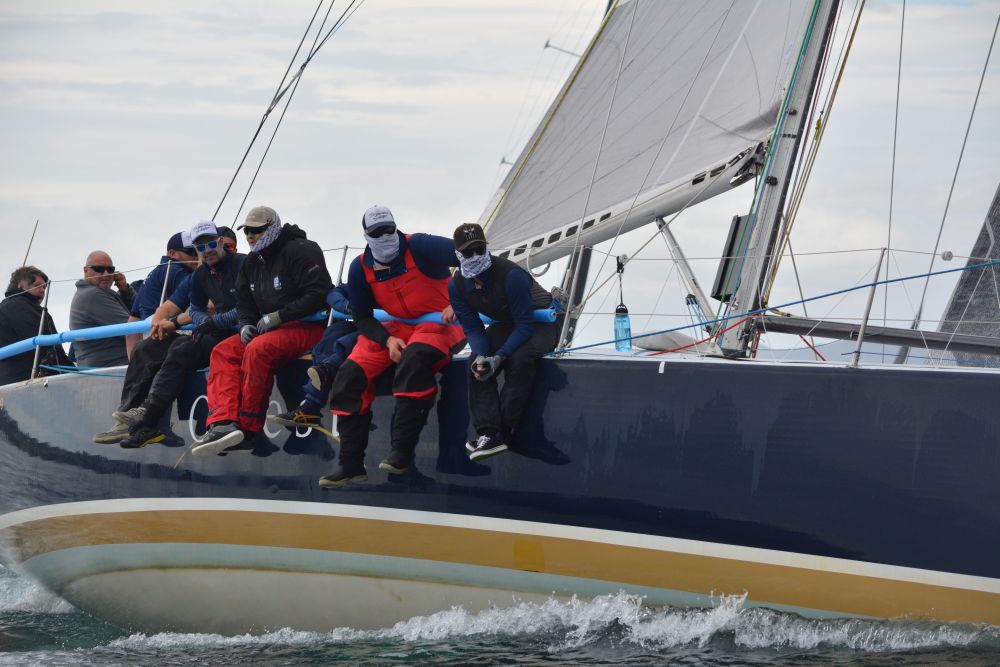 Alive, skippered by Duncan Hine, is leading the TasPorts Launceston to Hobart Yacht Race (L2H) on line honours. A late entry in the race, Alive, a Reichel-Pugh 66 sailed by a Tasmanian crew pulled together from some of the boat’s regulars when in Hobart, was the first boat to Low Head, and is expected to break the race record of 1 day 09 hours 33 minutes and 58 seconds, which was set in 2009.

It was a tough start for the 31-boat fleet which started the race in very light conditions at Inspection Head, Beauty Point, on the Tamar River, at 1130 today. Talofa, a Northshore 38 owned by Rob and Judi Cawthorn and a regular in the L2H race, was squeezed out on the start line and had to restart the race, while Black Magic, skippered by Bellerive Yacht Club Commodore, Graham Mansfield, was becalmed before the race, giving the fleet a 10-minute advantage.

The L2H is one race of a three-race series sailed over the Christmas / New Year period. Race One is from the start of the L2H to Low Head, the second race in the series is the race to Hobart, while Race Three is the King of the Derwent, sailed in Hobart on 2 January 2021.

Victorian entry, Dream, skippered by Robert Green, had a solid start to the race after a long absence from racing due to the COVID-19 lockdown in Melbourne, winning the race to Low Head on PHS and ORCi overall.

The Quest Syndicate, sailing from the Lindisfarne Sailing Club and skippering Quest in her first L2H race, was the first to Low Head on AMS, while The Dog House, skippered by Ambrose Coad and with Benjamin Coad, the youngest competitor in the race on board, was first overall on IRC.

It was a disappointing day for Windrose with skipperAshok Mani retiring the 1961 Admiral’s Cup winner 90 minutes after the start as a precautionary measure after identifying a few issues of concern with the boat.

The forecast for the rest of Sunday is for west to south westerly winds averaging 25 to 35 knots for Banks Strait and adjacent areas, very gusty in the late evening and persisting into early Monday morning before easing to 10-15 knots (average) by 0800hr Monday.

The fleet will take on the challenges of Banks Strait overnight before heading down the spectacular east coast of Tasmania.

The 285 nautical mile race is expected to finish in Hobart on Monday 28 December 2020.