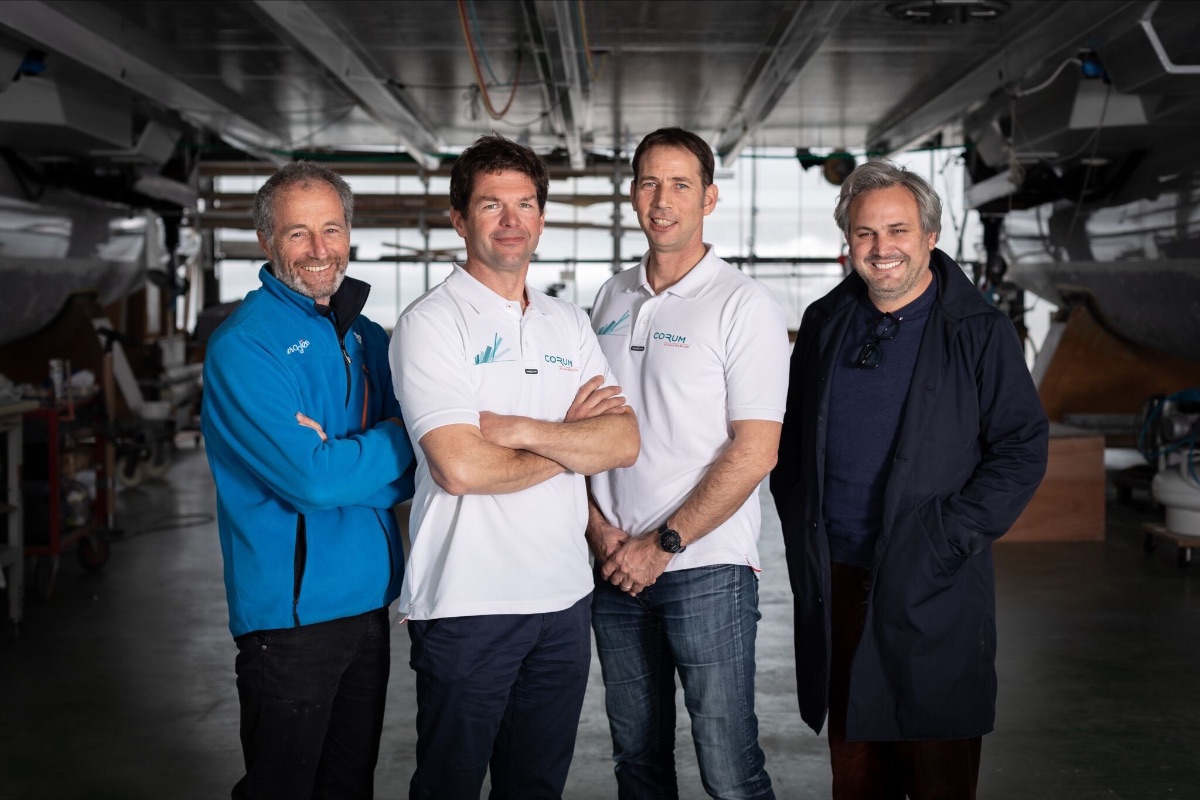 There’s nothing solitary about preparing for the Vendée Globe. It’s the quality of the teamwork carried out in the run-up to the main event that enables the skipper to hold the technological and sporting aces, as well as develop the mental strength to set sail around the world to conquer the holy grail of offshore racers.

A few weeks after the Route du Rhum 2018, Corum L’Épargne and Nicolas Troussel signed a deal to ramp up their partnership with the construction of a latest generation IMOCA monohull (18.28m) and the launch of a project, which will take them through to 2022.

A long-time racer, Greg Evrard called tactics for Mathieu Richard, whose crew spearheaded the top five of world match racing* for over 10 years. He has also won several Tour de France à la Voile competitions, the ORMA trimaran championship and been at the top of his game in numerous series. He also headed the finance department at Décathlon and then North Sails France, of which he was director from 2014.

Brought together through competition, Troussel and Evrard’s relationship is guided by mutual respect and running this project together seemed like the obvious way to step things up a gear. With one of them taking up the role of skipper, the other team director, this trust-based association is key.

Double winner of the Solitaire du Figaro, Troussel confirms this: “By teaming up with Greg, the aim is to develop a long-term project. It’s not just a skipper’s project; it’s a team project, where I feel supported and where I can allow my primary focus to be my job as a sailor.”

Evrard is leaving his responsibilities at the sailing manufacturer in late March so he can fully devote himself to his new duties. “The priority in any project, whether it be sporting, professional or corporate, is the team,” he says.

“I’m fascinated by the way individuals operate collectively. It’s a story about people with Nicolas and his sponsor. The idea is to continue putting together a group, within which trust is possible and where we respectfully share the desire to build something good together,” he admits.

“Match racing is a duel on equal terms on the water as opposed to fleet racing. It initially took inspiration from the America’s Cup, before going on to become a sports discipline in its own right.

“And here we have the other dynamic duo of the project. “The association of a Juan Kouyoumdjian, design project-managed by Michel Desjoyeaux, with his Mer Agitée and Mer Forte structures, is the perfect solution for us since we can save time with confidence,” Evrard explains.

“Juan has won the last three Volvo Ocean Races with prototypes and Michel has won two Vendée Globes and built four of the last five winning boats. Both guys were very keen to work with one another and it’s a fantastic boost for a project, where the problematics of time are genuine.”

Corum L’Épargne is one of eight new boats, which will take the start of the Vendée Globe in Les Sables d’Olonne on 8 November 2020. She’s the second such creation by Juan Yacht Design and the last boat to be launched as her slot is scheduled for the first quarter of next year.

“If we keep on our toes, this will enable us to benefit from all the very latest observations and knowledge, which progresses in real time,” admits Frédéric Puzin, for whom the banking domain is part of everyday life.

For the Franco-Argentinean naval architect, it’s a motivating challenge. “I’ve learnt a great deal from Michel Desjoyeaux. He sets an example for designers and sailors. We really complement one another. He’s coming into this with his massive experience of innovations in IMOCA, backed up by his knowledge as a user of these innovations in the Vendée Globe.

“We’ve created a ‘trinomial’ with Nicolas, which is working out very well.” Desjoyeaux echoes this sentiment: “I’m incredibly lucky to be doing this boat with Juan. We’ve often exchanged ideas and have come close to working together before, but it never panned out. Today, it’s become possible thanks to Corum L’Épargne.”

This duo naturally makes sense to Troussel: “Juan is talented and very keen to perform well in the Vendée Globe. I’ve raced an IMOCA before, but I’ve never been in the Deep South. I needed someone who could help me and guide me – and who better than Michel Desjoyeaux? It’s a huge guarantee of safety and performance for me.”

“In this way, we have two utterly consistent duos, who are very prominent in their field, if not at the top of their game,” concludes Frédéric Puzin. “For Corum L’Épargne, it’s the dream team.”

Fleshing out the team
This project is also welcoming Tiphaine Renard as head of operations. She’ll bring into play her experience within Team France in the America’s Cup, Dongfeng Race Team in the Volvo Ocean Race and public relations in the Route du Rhum.

The boat’s livery and the design and associated media are provided by Jean-Baptiste Epron. Finally, for the project activation, the team is being fleshed out internally as well as externally. The Ultra Violet agency with Julia Huvé and Hugo Chartier is now supporting the French leader in real-estate investment solutions with the communication, media relations and digital aspects.