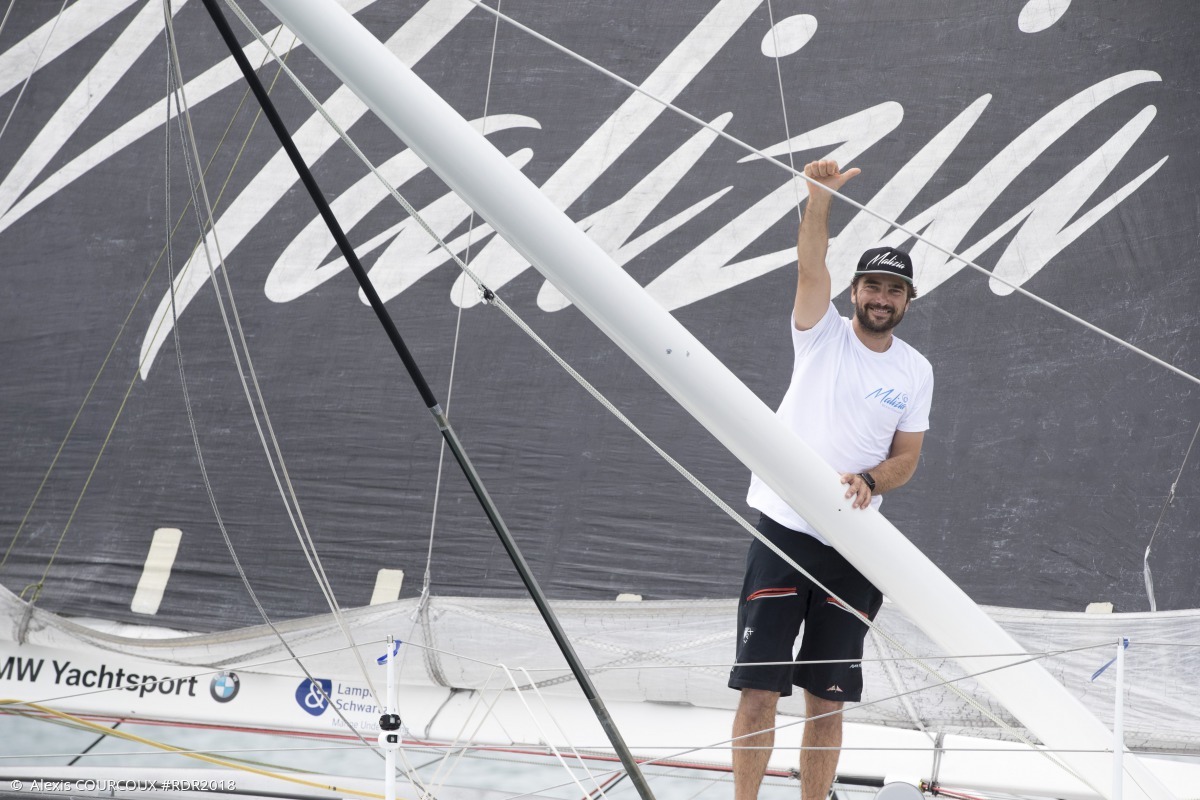 In 2020, Boris Herrmann will become the first German to compete in the Vendée Globe, which he is preparing for, feeling full of confidence, while remaining methodical.

After earning fifth place in the Route du Rhum, Boris may take the lead in the IMOCA Globe Series if he gets a good result in the Bermuda 1000 Race, where he will be one of the eighteen skippers lining up on 8th May. He will then follow a double-handed programme with Pierre Casiraghi, leading up to the Transat Jacques Vabre.

We met up with a skipper who has raced on all sorts of boats and is committed to campaigning to protect the environment.

At the start of the next Vendée Globe, on 8th November 2020, Boris Herrmann will probably be the competitor who has clocked up the most miles on his IMOCA. Last year, the German skipper covered almost 25,000 aboard Malizia II, a foiler from 2015 designed byVPLP-Verdier, which was Sébastien Josse’s Edmond de Rothschild in the 2016 Vendée Globe.

2019 looks like being a busy season with three Globe Series races to compete in (Bermuda 1000 Race, Rolex Fastnet Race and the Transat Jacques Vabre) as well as the Rolex Giraglia and the Azimut Challenge.

“The boat is based in Monaco and for each event, we will have to do a return delivery trip. That means we will clock up a lot of miles in varied conditions; which is bound to be interesting,” explained Boris. “I intend to work hard and sail as much as I can. I’ll bring the boat back alone from the Transat Jacques Vabre. My IMOCA won’t be the best performer at the start of the Vendée Globe, but I would like her to be the most reliable.”

Currently in fourth place in the new IMOCA Globe Series World Championship, Boris Herrmann wants to take advantage of the Bermuda 1000 Race to move up a few places. In fact, the three competitors who are ahead of him in the overall rankings (Paul Meilhat, Yann Eliès and Alex Thomson) will not be competing in this 2000 mile solo race between Douarnenez and Brest, via the Fastnet and the Azores.

“I’m really hopeful about this race, even if it is only my second big solo experience on an IMOCA, after the 2018 Route du Rhum,” added Boris. “We won’t yet be seeing the new fleet of IMOCAs, but the Bermuda 1000 Race will be the first real test in 2019. I’ll be able to see how I measure up against some excellent competitors like Sam Davies, with her new foils, or Sébastien Simon, on his first solo IMOCA race.”

“I felt confident in this boat from the first day”

Herrmann is well placed, as his project is a solid one, which has taken off, in spite of having only limited means.

“The support of the Monaco Yacht Club is valuable, but we are looking for partners to complete the funding and to allow us to perform even better. The name of the boat remains up for grabs. There was never any question of Monaco taking on the project alone,” confirmed Boris.

In spite of the current budgetary constraints, the German skipper has managed to work efficiently and performs well. “We owe a lot to Gitana who sold us an IMOCA that had been completely developed and was a very good base. I felt confident in this boat from the very first day. That meant we found ourselves in a good position. My little team has gradually expanded and everyone works well together.”

To raise his competitiveness, the German has been training in the Finistère Course au Large training centre in Port-la-Forêt since last year, where the last five winners of the Vendée Globe trained and sixteen winners of the Solitaire du Figaro.

“I am in charge of an international, project that is an outsider, and it’s a huge honour to be able to train at this centre,” he smiled. “Having such a gathering of professional sailors working together and sharing information to advance together, is something unique in the world. It is very helpful talking to others. Yann Eliès for example in particular gave me some very useful advice.”

A princely co-skipper for the Transat Jacques Vabre

With the 2019 sailing season dominated by double-handed sailing, Boris Herrmann chose as his co-skipper, Pierre Casiraghi, a member of the Monaco royal family and founder of Team Malizia.

“Pierre has a very busy schedule and is unable to come and train in Port-la-Forêt,” explained Boris. “Fortunately, he already knows the boat well. Together we finished on the podium in the of the 2017 Fastnet Race, before taking part in the Monaco Globe Series. Before the Transat Jacques Vabre, we will take part in the Rolex Giraglia and the Azimut Challenge. Pierre is not a pro sailor, but has a lot of experience and has a good outlook. I’m proud of the project we set up together and can’t wait to get back out there sailing with him. In the Jacques Vabre, we’ll be aiming to finish in the top third of the fleet.”

Next year, Boris will compete in all the races in the Globe Series, as he makes his way towards the Vendée Globe. Looking further ahead, he admits he is interested in the Ocean Race, the crewed round the world race with stopovers.

“For me, it is as if this race was part of the Globe Series. It’s only natural that I want to take part in this adventure that so complements the Vendée Globe.”

Towards a boat with zero-emission boat

While he waits for these races, the boat is spending five months in the shed in Lorient (she is due to be relaunched on 5th April) where every element is being carefully examined and some improvements are being made.

“For example, we set up a second tack fitting on the bow sprit, as they have on Hugo Boss. The idea is that when conditions are very variable you can hoist a small and large gennaker and furl one up and unfurl the other quickly,” explained Boris.

Another new feature is the solar panels that have been carefully studied and optimised. Boris Herrmann: “We hope these panels, which weigh less than 30 kg will perform as well as we expect. With their installation and the hydrogenerators, which work really well in most situations, we hope to supply 100% of the energy required without having to use the engine. I don’t want to do the Vendée Globe with 250 or 300 litres of diesel. I’m looking at taking 40-50 litres aboard in case there is a problem. I hope to free myself from that energy constraint. It is part of my quest for performance and a great symbol, as I shall be attempting to sail all the way around the world without using a drop of diesel. IMOCAs require a lot of energy and we simply cannot take more and more diesel aboard. We need to have amore intelligent and cleaner approach. That is why it is so interesting to have some efficient alternative energy supplies.”

Boris Herrmann is clearly the latest in a line of influential skippers who are in favour of moving to greener energy and environmental protection. Aboard his IMOCA, he has set up a mini ocean lab.

“During all our trips, this equipment pumps sea water all the time and measures some data which is useful for scientists, in particular measuring the level of CO2 on the surface. That’s very important when you see that the ocean absorbs 30% of the carbon dioxide emissions produced by man.”

Boris also offers a vast educational programme, “My Ocean Challenge;” for children between eight and twelve.

“By sharing our adventures out at sea, we can explain to them the fundamental role that the ocean has in regulating our climate, how that is threatened and what we can do to protect it. We believe it is vital to educate youngsters so that the situation will change,” he concluded.