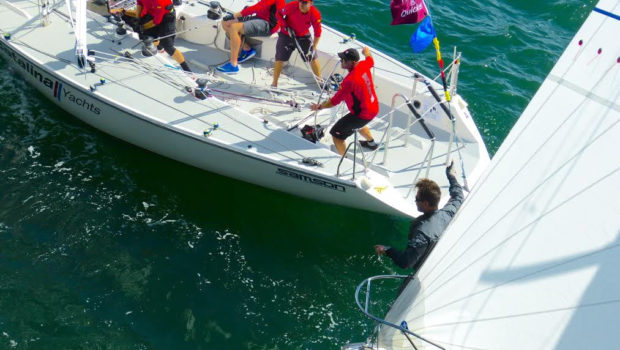 Scott Dickson and David Storrs defeated young challengers Harry Price and Nevin Snow in the semi-finals of the 38th annual Ficker Cup, with Dickson, representing Long Beach Yacht Club, going on to win the prestigious Ficker Cup trophy, and a spot in next week's Congressional Cup regatta. As first runner up Storrs also advanced to Congressional Cup, which runs March 28 to April 2.

Dickson, who led after the double round robins, elected to race Price who – despite ranking no. 3 in the world – admitted to “struggling” in the 37-foot Catalina monohulls over the weekend. That left San Diego's Snow to compete against Pequot Yacht Club's Storrs.

In the final of three days of racing, starts were contentious with penalties a plenty, which continued up and down the course. Spectators on the Belmont Veterans Memorial Pier had a thrilling view of the show, as racers skimmed along the pier in intense pre-start maneuvers.

Sunday's 6-8 knot southerly breeze was the lightest of the event, giving competitors a chance to test their prowess in a variety of conditions. And with the double round robins and more than one dozen races under their belts, the sailors were primed. Each pairing went 2:2 before the final flight, when Storrs dispatched Snow.

Meanwhile Dickson battled mightily in the semi-finals. Down 1:2 entering Flight Four, as the pressure increased – both wind and worry – Dickson pushed Price well past the top mark, dragging him so far off course the run to the gate turned into a reach. Tenacious, Dickson forced Price into a penalty, but sacrificed the lead. As they approached the finish Price, still holding a slim advantage, started his penalty turn and shut the door on Dickson.

“Price did a wonderful job at that,” Dickson later said, adding he felt his tactics were “too aggressive, and not defensive enough.” Pinned out of the finish line, he started to douse and spin. But when Price finally exonerated his penalty, he ended up on port, establishing a port-starboard situation that pulled another penalty, giving Dickson the chance to squeeze across the line to victory. Dickson won those last two races.

By the time the finals commenced, the breeze had freshened. Dickson took the first two matches but Storrs battled back in the third; finally succumbing to Dickson in a very tightly raced match four – putting Dickson's team in the victory seat.

Dickson is no stranger to Ficker Cup racing, and it showed. From 2000 through 2007 he owned the event, winning every title except for 2005. His second-place finish in Ficker Cup 2016 scored him a berth in last year's Congressional Cup, where he sailed his way into the semi-finals and finished fourth among the field of international pros. His lucky charm this week was his father Roy Dickson, a legendary New Zealand yachtsman who faithfully watched every race.

“This was obviously a very special Ficker Cup to win, I'm very proud,” Dickson said, referring to the recent passing of Bill Ficker. “There were eight talented teams here, anyone of which could have qualified. I'm very pleased and proud of the team; they had their backs against the wall a number of times and showed their mettle.”

Finishing second, and qualifying for the Congressional Cup, “is just a massive thrill, the biggest event of my sailing career,” announced Storrs, with the exuberance of a kid. Several years ago, this septuagenarian underwent a heart transplant, and boasts his youthful heart has equipped him to take on younger rivals.

Storrs said he's only been seriously match racing five or six years; prodded back into the sport after a 45-year hiatus by Dave Perry. “But the real hero in this is my wife. She said, 'David you're pretty old – you don't have time to build up the experience like the young kids. If you're going to do this, hire some pros and learn from them.' And that's been really thrilling; racing with really good people, and against really good people.” He lauded LBYC for their organization and hospitality, calling the Ficker Cup “the best event I've ever sailed in,” and eagerly looked forward to Congressional Cup.

Price won the first race of the Petite Finals, but Snow came from behind to win the next two races, and claim third place in the Ficker Cup. Snow is a two-time winner of the Everett Morris Memorial Trophy for Best Intercollegiate Sailor. An Olympic hopeful, he is a member of San Diego Yacht Club.

Event Chairman Eric Dickinson said, “This Ficker Cup probably had some of the best talent we've seen in a long time. Having the breeze the first two days was great, because it let us complete the double round robins as planned,” adding that spectators “got their money's worth.”

Dickinson continued, “I was very excited about having the viewing on the pier,” after winter storms temporarily closed the Belmont Veterans Memorial Pier platform. “Being up here with the family, friends, club members and visiting yachtsman is a real treat other venues don't enjoy. Kudos to Chris Macy for getting the pier squared away, and to all the racers, officials, and volunteers for making this such a great event.”

He added, “It was fantastic having Sid Gathrid and David Storrs compete this year. At 16, and 72 (respectively) their age span is a commentary on how anybody can compete in an event like this.” Noting that Storrs has advanced to Congressional Cup, he continued, “Sidney is young and didn't have a lot of prior match racing experience. But he and his crew had the courage to come out here and mix it up with the pros, and win a few. I hope he left with his head held high, and will return!”

The Ficker Cup was established by Long Beach Yacht Club to honor Bill Ficker, who recently passed at the age of 89. Ficker was a renowned yachtsman, who won the Star Class World Championship in 1958, and helmed Intrepid to victory in the 1970 America's Cup. Four years later, he won the Congressional Cup.