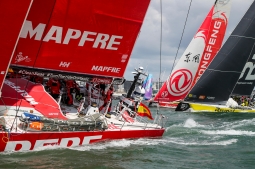 As the Volvo fleet left Auckland on Sunday afternoon, bound for Cape Horn and Itajai in Brazil, all was not well on board several of the yachts. A virus has swept through the race village, with members of the media the first to go down with it. Yesterday I had confirmation that a number of sailors are suffering from coughing and sore throats, and measures were in place to isolate them from the rest of the crew until the last minute.

The VO65s are very robust yachts and they take a lot of energy to sail well. Having two or three crew unable to perform at peak capacity could impact performance, especially as conditions are expected to change constantly on the beat to New Zealand's East Cape, before the yachts hopefully ease sheets and head deep into the Southern Ocean.

This is the second of the two Southern Ocean legs, so most of the crew know what to expect and are more at ease with the conditions than they were leaving Cape Town for Melbourne late last year. But they will be going much deeper – right to the edge of the ice exclusion zone, which could be set at 60degs or even higher.

In recognition of the race's historical routes, the two Southern Ocean legs carry double points and there is also a bonus point for the first yacht to round Cape Horn. This puts pressure on race leader MAPFRE which holds just a five point lead over second-placed Dongfeng Race Team. Scallywag is in third position and is eight points behind Dongfeng, while the other two teams in contention are AkzoNobel and Vestas 11th Hour Racing, three points adrift of Scallywag. You can see the full points table here.

With Olympic and World 49er champion Xabi Fernandez on the helm, it was the Spanish boat MAPFRE which was best positioned at the start, timing the line perfectly at the pin end. Arch rival Dongfeng and Brunel went left with the leader while the other four boats chose the Auckland city side.

At the first cross, the two red boats, MAPFRE AND Dongfeng, were comfortably ahead of the boats coming across on starboard but Brunel had been spat out the back door. All skippers were using the full width of the harbour, taking advantage of the brisk 20 knot easterly to lift them at upwards of 11 knots towards North Head for the first time.

The course required three lengths of the harbour and at the top mark, it was MAPFRE who was first to turn back towards the city and unfurl her big A3 downwind sail. She was followed in quick succession by Vestas 11th Hour Racing, Dongfeng, Brunel, Turn the Tide, AkzoNobel and Scallywag, with less than 100 metres covering the whole fleet.

A dodgy gybe on MAPFRE allowed the chasing pack to close and Dongfeng was right on her transom. But the leaders were able to pull away again and halfway up the harbour there was more than 500 metres between first and last.

As they rounded the mark opposite the Volvo Race Village and headed away from Auckland for the last time, MAPFRE  was again in total control. Brunel, with Peter Burling on the wheel, had picked a good course down the middle but couldn't quite sneak ahead of Dongfeng who came in hot. Turn the Tide was fourth, followed by AkzoNobel, Vestas and Scallywag.

MAPFRE looked in perfect trim as she crossed ahead of Dongfeng and tacked towards North Head, where a large crowd cheered her progress. The fleet then eased sheets and reached down the channel between the east coast bays and Rangitoto Island before turning south for East Cape.

With 7600nm to race through the inhospitable Southern Ocean, the sailors will certainly earn their pay over the next four or so weeks. Keep an eye on the positions by checking the tracker regularly.

At 5.30am Eastern Australian Daylight Saving Time, the fleet was beating into a 20 to 25 knot easterly and was halfway to East Cape. Mapfre held the lead in a tight bunch that included Dongfeng, Akzo Nobel, Scallywag and Vestas. Brunel was down to leeward of the bunch but only 1nm behind the leader, while Turn the Tide was to windward, on the layline to the Cape.

Watch a replay of the start here