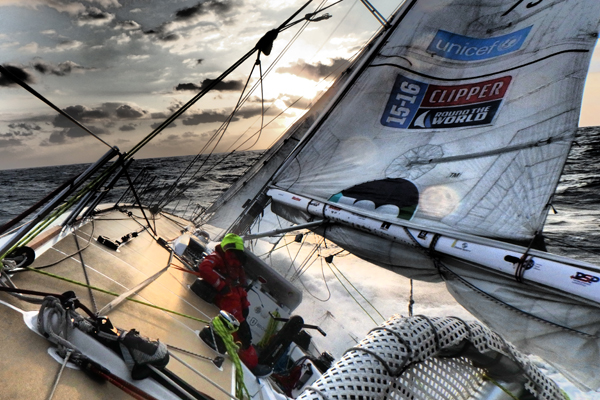 The wind has eased off substantially after an exhilarating night of sailing with a steady 30 knots, and gusts of 50 knots as the teams had their first experience of the might of the North Pacific Ocean.

The wind has been fluctuating and very variable due to the direction and the Japanese land mass, meaning many sail changes have been necessary to keep up with the conditions.

As a result of the variable conditions, there have been some changes on the leaderboard on day 5 of the Seattle Pacific Challenge. Garmin still leads the fleet, with Derry~Londonderry~Doire up into second place and GREAT Britain now in third place, with Unicef moving down a place into fourth.

ClipperTelemed+ is up into fifth position, with Da Nang – Viet Nam in sixth and LMAX Exchange moving down five places into seventh.

Bob Beggs, Skipper of Qingdao, in twelfth, described the last 24 hours of racing.

“Due to the complimentary east Japan current we were often seeing ground speeds of over 12 knots for a boat speed of only nine knots. This combined with a short sea meant we were often launching ourselves off the top of waves with no back and crashing down the other side, with the impact shaking the boat relentlessly.

“This made sleep difficult except that many of the crew were very tired and several suffering from Mal de Mer. Today as we shake out the reefs many are coming back to life slowly, with others exhilarated by the exciting sailing overnight,” Bob added.

Darren Ladd, Skipper of IchorCoal, in eleventh position, said his team was now making steady progress after an eventful night that saw the wind spike from mid-20s to a peak gust of 50 knots.

“For a while until first light this morning we were making 10+ knots under staysail and reefed main alone. We now have the Yankee 2 up and everything is going swimmingly.

“The gap between the back of the pack and us seems to be decreasing and with a forecast predicting light winds ahead, fingers are crossed that the whole fleet will bunch up. For us this would be a bit of a let off after being well and truly left behind after a reasonable start,” Darren added.

The weather is forecast to remain steady for the next couple of days, with more benign conditions.