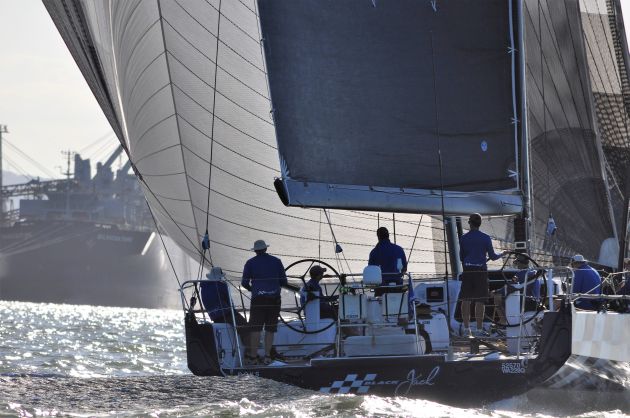 Black Jack completed the Brisbane to Gladstone Yacht Race at 4:13.50pm on Easter Saturday afternoon and in the process recorded her third consecutive line honours win in the Easter event. Frustratingly for the crew, despite consistent sailing in tricky conditions, the light winds have once again meant that the 12-year-old race record set by Skandia in 2004 remains intact. On the dock Peter Harburg, owner of Black Jack, told the attending media that to the Black Jack Team the Brisbane to Gladstone Yacht Race is the most important race in Australia and vowed to return next year with the intention of finally setting a new race record. Skipper, Mark Bradford, reiterated Peter Harburg’s comments and praised the crew for their efforts during the 29-hour passage.

Whilst the Black Jack crew now retire to Port Curtis Sailing Club to celebrate their achievements, the rest of the fleet have more than 90 nautical miles to sail. Navigators will be keeping their eyes to windward hoping for a shift in winds that may yet allow them to challenge Black Jack for the Courier Mail Cup which is awarded to the fasted boat on corrected time and overall winner of the race.

The light winds and longer race are likely to be hardest on the three boats racing in the short handed division. With only two crew members on board, Race director Nigel Statham commented “The persistence shown by these crews must be admired, the concentration required to sail in light conditions will be hard to maintain when you’re potentially on deck by yourself”. Currently winning this division is Queensland Cruising Yacht Club entrant Samurai Jack but all three boats are closely packed and any could yet win the category.