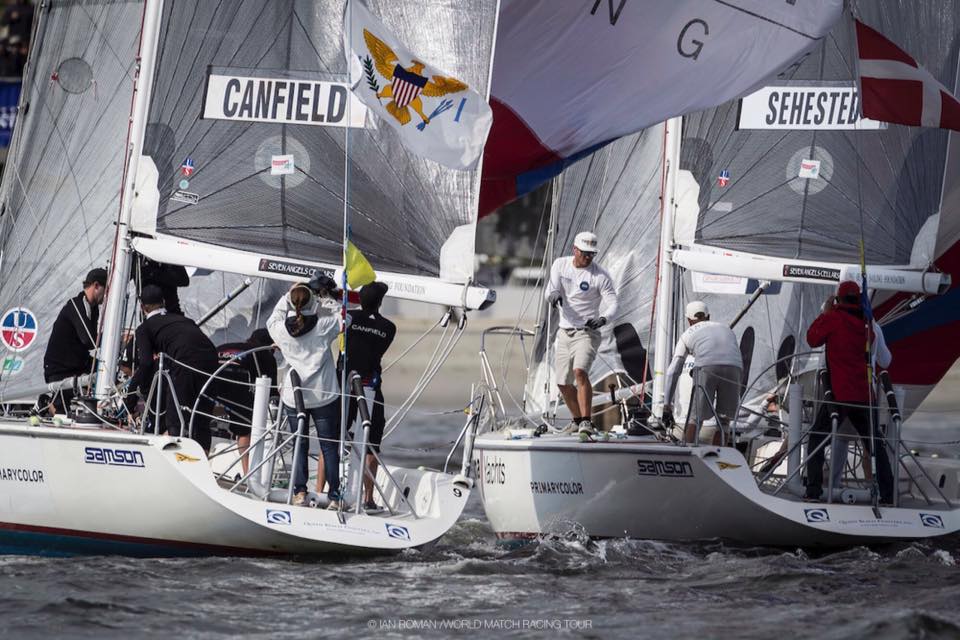 But the wind played havoc with racers none-the-less. Light breezes from the southwest built auspiciously, then plunged. The drop was so sudden, it threw Qualifying flight three into a frenzy …. a Swan Lake-like performance of boats grazing across the course with no apparent clue as to who was racing who. Caught in the shifts – from 185 degrees to 230 degrees – Congressional Cup defending champion Taylor Canfield (ISV) lost to Harry Price (AUS) by a full minute, while Sam Gilmour’s (AUS) time over Nicolai Sehested (DEN) was nearly the same. And Johnie Berntsson (SWE) hammered Joachim Aschenbrenner (DEN) by a remarkable two minutes: a huge spread for such a highly-ranked field of sailors.

But just as suddenly the sea breeze filled in to a brisk 12-14 knots. Aschenbrenner rebounded with a win over David Storrs (USA), and Canfield returned to his winning form: ending the day 4:1 – tied with Berntsson. Both skippers are past Congressional Cup champions: Berntsson in 2009, and Canfield, 2014 – 2016. Like most of the teams on Day One, Berntsson said they “struggled with the details,” but added, “I’m happy, we had a good day and are staying in the game.”

Sehested and Storrs ended the day with one win each. “It was a bit of a tough day,” admitted Sehested, but he pointed out last year they moved up the leaderboard to second place overall, nearly capturing the title from Canfield, and was undeterred by his 1:4 start to the week.

And yet today, everyone got a piece of the pie, heralding the incredible level of competition expected over the next four days of Congressional Cup 2017.

This 53-year tradition, hosted by Long Beach Yacht Club, is the second stop on the 2017 World Match Racing Tour, attracting a dozen of the top match racing teams from around the globe, as they vie for the Crimson blazer. Races will continue through Sunday April 2, beginning at 11:30 Pacific Time each day off the Belmont Veterans Memorial Pier.