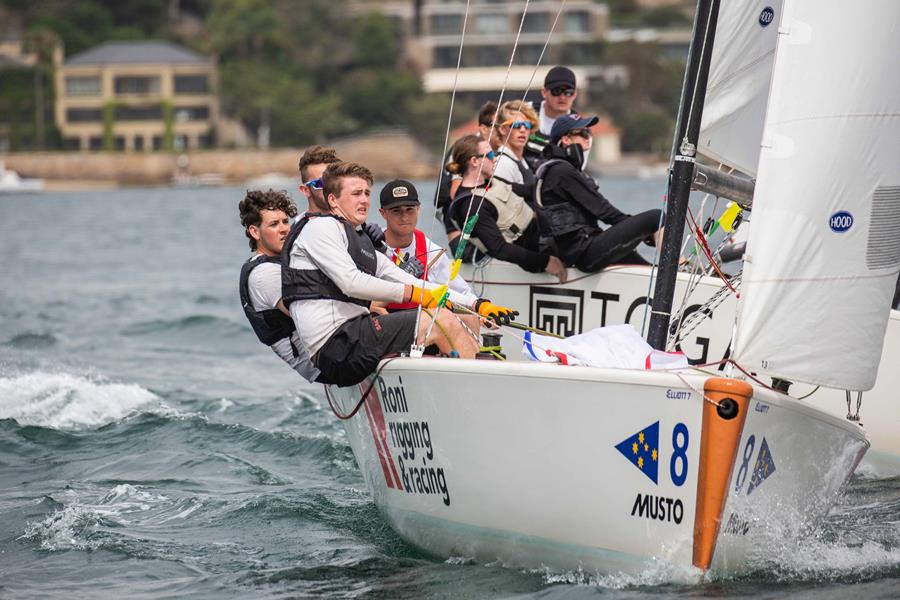 The opening day of the 2019 Musto International Youth Match Racing Regatta got off to an intense start as wild weather conditions swept across Sydney at midday, temporarily postponing racing. The fleet of 12 competitors had to work around the ever-changing conditions with just five flights completed due to the weather.

It was always going to be a difficult day on the water, with the Bureau of Meteorology issuing a storm warning for Sydney in the late afternoon. Racing began on time in Rushcutters Bay at 1200hrs, with some top-ranked teams doing battle first-up in Flight 1.

Defending champion Frankie Dair made a perfect return to the competition, winning all three of his races across the day, as did top-ranked competitor Nick Egnot-Johnson. Both teams share the lead heading into the Day 2.

Cruising Yacht Club of Australia’s (CYCA) Finn Tapper also finished the day with three points but had one more race than Dair and Egnot-Johnson. Tapper's only loss came in the final flight of the day when he had to take drastic action to avoid a competitor in another match. The manoeuvre resulted in a huge broach for Tapper, who subsequently missed the finish line, allowing his opponent to sail through for the win.

The other upset of the day came when current World Champion, CYCA's Tom Grimes, lost his first race of the day to his World Championship winning crew of James Hodgson. Hodgson is currently campaigning for next year’s World Championship as a skipper, with Grimes stepping down from helming to concentrate on university commitments over the summer. Both Hodgson and Grimes are locked together on points in fifth place.

Flight 2 was temporarily postponed, as Sydney was hit by massive storm front, driven from the west. Fifty-knot winds were recorded across the harbour for several minutes as the front rolled through.

The fieriest match of the day fell in Flight 4, between Jordan Stevenson and Jeffrey Petersen. After a tense prestart and windward leg, the match came alive on the downwind run. With Stevenson carrying a slight lead, Stevenson gybed to try and cross Petersen, but misjudged the distance, resulting in a collision and damage to Stevenson’s boat. Eventually, a half-point penalty deduction was given to Stevenson for the extent of the damage once it was assessed back at CYCA.

Tomorrow, the Race Committee will be pushing hard to get back on schedule to complete the round-robin stage of the regatta before moving into the repechage round. Another windy afternoon is currently forecasted, with a 20 knot north-easterly looking to settle in tomorrow afternoon.