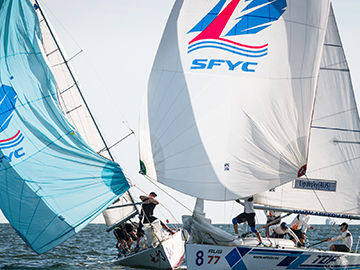 17/07/2015
Following another morning with light winds, the ISAF Nations Cup Grand Final 2015 continued a little later than scheduled in Vladivostok, Russia. Despite a four hour postponement, the first round-robin was completed and the second got underway.
Continuing his form from the first day, Russia's Vladimir Lypavskiy won every single match on the second day of sailing to end the first round-robin with a perfect eight from eight record in the Open division.

Lypavskiy said, “Today we had hard matches with the USA and Great Britain. At the prestart with the US team we were leading the whole time, but finally made a mistake. After that they were leading right until the end of the match when we managed to win, but only because they had an outstanding penalty to work on.”

Australia's Evan Walker follows closely behind Lypayskiy with a seven of eight record, with his loss to the Russian his only blemish.

Pierre Rhimbault of France finished his round-robin with six wins from eight, including a close match with the USA team in which the American's were penalized for gaining an advantage by not keeping clear as a windward boat at the starting line.

Rhimbault commented, “The wind was very light today, so it was difficult to keep speed every time, to do some good maneuvers and to control the time at the starting line.”

The tight and competitive races produced some contact and most passed without consequence. The last flight of the day did however take a casualty as the Algerian team trimmer fell on the winch, hurting his back meaning he was unable to continue.

In the Women's division, USA's Nicole Breault also finished the first round-robin with a perfect record, but she could not carry the momentum through to the second round where she started with two straight losses.

After losing her first match of the second round-robin, Brazil's Juliana Senfft was hoping to take the lessons learned from a tough day of racing and apply it for a strong finish. “Today was a very hot day for us. We lost a couple of races. But with the boat it was a little bit easier. We hope to be able to master it before the last day.”