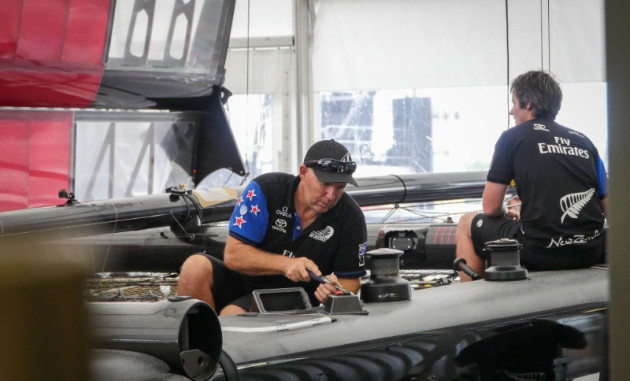 Emirates Team New Zealand are preparing for their first sail on the very waters which will host the 35th America’s Cup in 2017.

This week the fleet of America’s Cup challengers get a taste of what is to come in 2017 as they resume racing in the Louis Vuitton America’s Cup World Series, which Emirates Team New Zealand currently lead by seven points.

Emirates Team New Zealand are the only team to finish inside the top three positions in every race so far in the series and this is the obvious key to keeping at the top end of the leaderboard and being given every opportunity to be on the podium in here in Bermuda.

“It’s been a great couple of regattas in Portsmouth and Gothenburg, so hopefully in Bermuda it will be a good opportunity to get out there do some more racing as we are still pretty short of practice as a group, really we are still in our infancy of what we can achieve as a sailing team, so we are really looking forward to getting back out onto the race track and testing ourselves against the other teams.”

As a sailing location Bermuda is unique and the challenges of sailing here are well known to Ashby.

Looking ahead at the forecast for the weekend it is anybody’s guess only two days out from the regatta start.

“At the moment we could have anything between light and heavy conditions, all the meteorologists are unsure of what we are going to get depending on a small system spinning off the coast of Bermuda. So we just need to be prepared for whatever comes.”

“If the wind is light and from the west we can sail right in front of the city front- very tight course should make for challenging racing and great for the spectators.”

Aside from all of the challenges during the two days of racing for the Louis Vuitton America’s Cup World Series Bermuda, the importance of time and experience on the very waters of the next America’s Cup is not lost on the team skipper.

“Being able to get out here on the water of the Great Sound is very special and, where hopefully, in a couple of years time we will have some fantastic success. So it’s great to put your toe in the water so to speak at this early stage.”

Friday local time is official practice race day, followed by two days of racing on Saturday and Sunday to decide the winner of the event and the establish the 2015 Louis Vuitton World Series leaderboard.