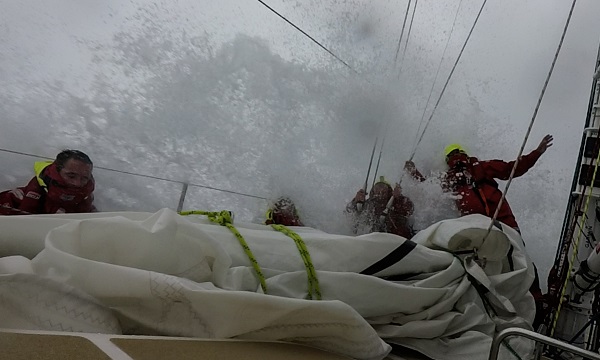 The Clipper fleet is making good progress in some fairly gruelling conditions, with strong winds and gusts around 50 knots predicted for the eastern group over the next twelve to 24 hours.

For the two western boats, Qingdao and LMAX Exchange, it is the opposite problem, with a new developing South Atlantic High getting in the way of progress.

Garmin has re-taken the lead, and is just 2.9 nautical miles ahead of second-placed GREAT Britain, with Mission Performance now in third, 55 miles behind the leader.

Huw Fernie, Skipper of Visit Seattle, in seventh, described the last 24 hours. “A change from the strong white sails to the more fragile but faster spinnaker let us set some good speeds throughout the day. It was tough work on the helm.

“There is nothing quite like driving a large ocean racing yacht down big waves; you're on the edge of control and going like a freight train. Frightening at the time but guaranteed to bring out a smile when the surf is over,” he added.

Derry~Londonderry~Doire, IchorCoal and Da Nang-Viet Nam – the three boats which headed further south and faced headwinds when going for the Scoring Gate, have dropped back in the rankings; while Qingdao and LMAX Exchange must decide whether to head for the gate or not. Will their risk be worth their reward?

Mission Performance Skipper Greg Miller said the last 24 hours had been a day of fast speeds, but with some kite issues too.  “We have been stuck on a mainly easterly heading towards Cape Town with strong to medium winds and mainly following seas which is nice after the confused sea state we had yesterday.

“I last saw some resemblance of my bed around 0300 yesterday morning and have been working since sorting 'stuff',” Greg added.

All positions correct as of 0800UTC.