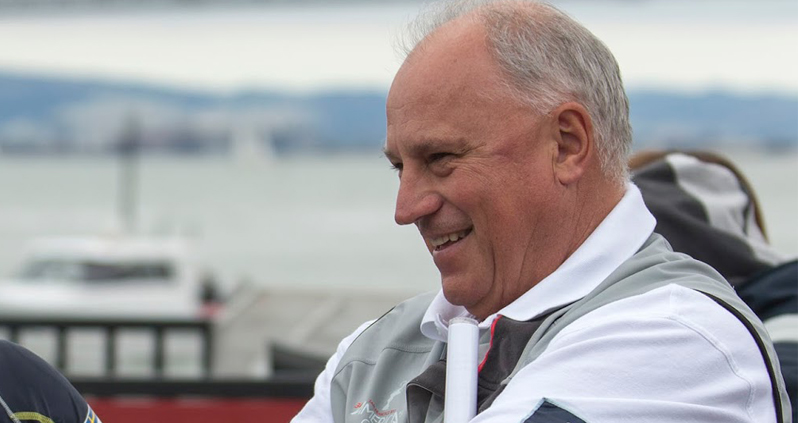 The illustrious NSW trio of Iain Murray, Colin Beashel and Richie Allanson on ‘Havoc’ have come from behind to win the Etchells National crown in Brisbane on late Friday.

Steered by Murray, who has won worlds, nationals and states in an assortment of classes, the crew crucially won the final Race 7, while yesterday’s leaders Matthew Chew/Brian Donovan/Ben Vercoe/Mitchell Kennedy ended the regatta with a UFD (where a boat is deemed to have prematurely started a race that is started under “U” Flag and is disqualified from that race and awarded the maximum number of points).

The UFD was subsequently used as the Gen XY Queenslander crew’s drop, leaving them a mere two points after being in the box seat for the past three days after winning Races 5 and 6. Chew, the 2009 Etchells world champion team member, and his crew, were obviously disappointed.

Murray and crew also won Race 3 and only finished outside the top five once, using a sixth place as their drop. Brings to mind the old adage: 'age and treachery will overcome youth and skill'.

The crew’s credentials are second to none. Murray won six 18 footer world titles before winning the Etchells worlds in 1984, moving into the realm of the America’s Cup, which Colin Beashel won on Australia II in 1983 before winning the 1993 and 1995 Etchells World’s. Allanson, a noted sailmaker, has been involved in wins in numerous classes, including the Etchells and one-designs, such as Marcus Blackmore’s Hooligan.

Showing his continuing strength in the class, Martin Hill and his Lisa Rose crew of Julian Plante/Mat Belcher/Sean O’Rourke, were third overall after winning the opening race. Hill joined the class in 2017, and with this same crew, won the Etchells Worlds last year, also held on Moreton Bay in Brisbane.

Hosted by the Royal Queensland Yacht Squadron, 27 crews took part in the Championship.