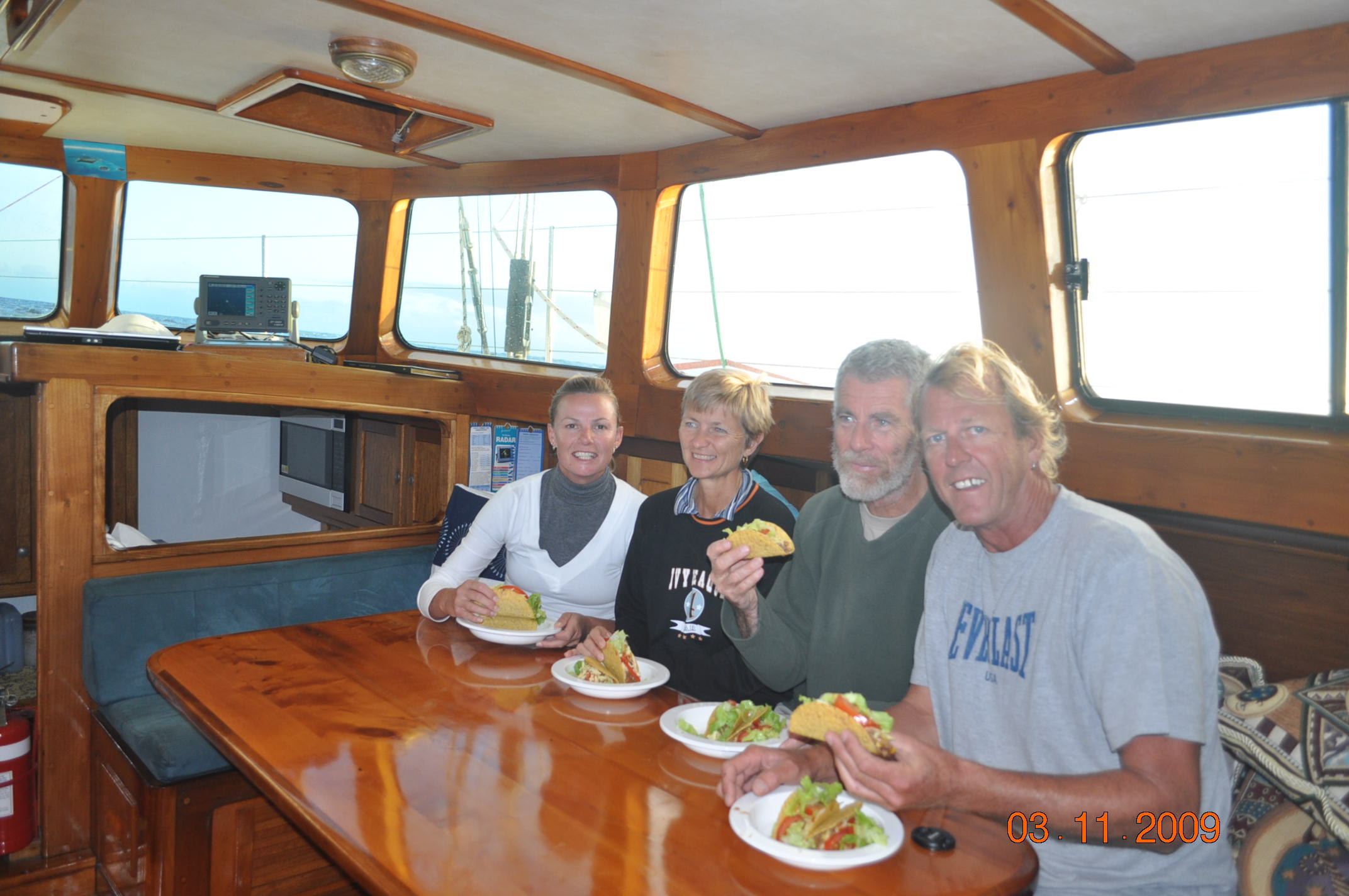 I am often asked this question and it is very hard to give advice, as we are all different, have different levels of experience and ability and our vessels too are different.

With the above in mind, I can only share what works for us and many others we know who have been successful at not only crossing oceans, but also at still having a good relationship after the fact.

We (My wife Leanne and I) enjoy the passages on our own, however, for various reasons we do sometimes take additional crew (a maximum of two) on our 15m catamaran. This was also the case on our previous monohulls (15m plus).

My rule is to have at least one other experienced crew aboard who has a good knowledge and understanding of the vessel and its systems, and if necessary (in an emergency such as injury/illness befalling the captain) can sail the vessel single-handed to its destination. Again in our case, that would be Leanne.

The advantage of having extra crew is that watch frequencies are less when shared amongst more people and as such fatigue is less which normally equates to a happier crew. Having said that, happiness of the entire crew can soon be compromised if crew compatibility becomes an issue.

In my experience people (myself included) are often quite different when at sea compared to when they are close to shore, or on land, and this often leads to some discomfort for those who are aboard and think they know the other people. Many friendships have not survived an ocean passage.

Vessel type and performance is also a consideration. For example, a heavy displacement easy going sea boat that is very forgiving and happy on auto pilot, without the need for constant sail trimming, will likely need less crew than say a performance cruiser that may need two people on watch and therefore six or even eight crew.

It is important to mention at this time that a reliable autopilot and or wind steering equipment that is capable of steering the vessel in the sort of conditions that can be encountered for days at a time is essential.

You would be surprised how often Autopilots fail when on ocean passages. Redundancy /backup systems and spare parts for Autopilots and self-steering equipment are also essential.

Accommodation is also a factor. Is there a berth for every one or will crew be ‘hot bunking’. Is there sufficient space aboard the vessel to allow those off watch to be comfortable?

Extra weight whilst probably not a big concern on a monohull, is certainly a consideration on a catamaran. Apart from the extra weight the crew themselves add, there is also the extra weight that comes with their luggage and the extra provisioning that will be required to feed everyone. How will this impact the vessel performance and safety?

Water Consumption presents another challenge. You would be amazed how much more water you will go through. If you do not have a watermaker, or are unable to run it whilst underway in anything less than calm conditions, can you carry enough water for the voyage allowing for the extra consumption?

Power Consumption is another issue. In this day and age of personal electronic devices, such as phones and tablets often being used for entertainment like reading or watching movies, you would be surprised by how much power you use charging these devices. The more crew, the more devices!

Maintaining harmony aboard can also become an extra task for the captain, as the larger the crew numbers, the more the captain has to deal with crew dynamic, which can require more energy and attention than you imagine. Nerves tend to get frayed as everyone is on top of each other and if seasickness strikes, well let’s just say it’s not pleasant.

So, perhaps on the modern cruising vessel 18m and under, for a cruising rather than a racing passage, a maximum crew of 6 could be considered.

On the converse, a minimum crew is two as there needs to always be someone on watch. With three hours on and three hours off watch system, careful passage planning in regard to weather and some flexibility in the schedule many cruisers have logged thousands of ocean miles with just two aboard.

Establishing roles is the most important thing I believe. There can be only one captain and all those aboard must agree to follow the instructions of that person without questioning them at the time of the instruction being given at all times especially in challenging situations.

Questioning and discussing the instructions and outcomes after the fact is welcomed, but not at the time of the instruction being given, as this has the potential to delay a necessary action and possible jeopardise the safety of vessel and crew.

It is therefore important (in my opinion) that the captain be the person who is most familiar with the vessel and the vessels capability, but not necessarily the most experienced sailor aboard the vessel.

The captain can and should always ask the opinion of a more experienced person/crew member, but ultimately the captain is the one who will take all things into consideration and decide upon a course of action that the crew must then follow without question or hesitation.

Crew should not under any circumstances make decisions and act upon those decisions without first discussing same with the captain and receiving the captain’s permission to proceed.

There, again in my opinion, needs to be a hierarchy of sorts amongst those aboard the vessel such as:
Captain
First mate
First crew
Second crew, and so on.

Each needs to understand their role and the responsibilities of that role.

We discuss this subject and many more at our Offshore Cruising Preparation Courses, which I believe should be attended by all those (captain and 1st mate as a minimum) who will be sailing together for extended periods offshore.

For information about the Down Under Rally Offshore Cruising Preparation Courses go to www.downunderrally.com/offshore-cruising-prep-courses