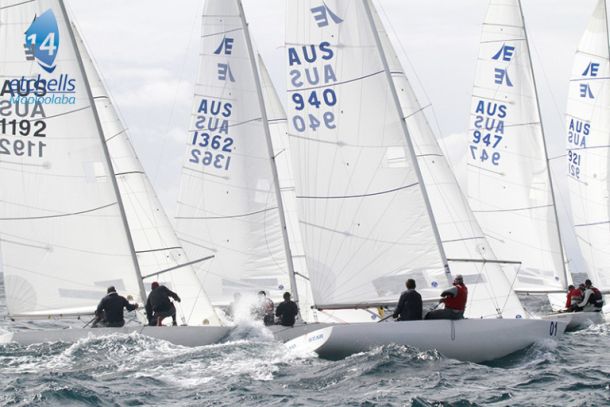 Hong Kong Fleet Captain Greg Farrell is leading the charge down under of the Hong Kong teams planning on using the June long-weekend Marinepool 19th Etchells Australasian Winter Championship as a warm-up to their World Championships later in the year.

He is expecting at least three or four Hong Kong teams to make it to Mooloolaba for June 4 to 7 regatta. Already confirmed is Mark Thornburrow who has competed in the winter championship on a number of occasions, finally winning in 2013. Thornburrow will be back with regular crew Michael Huang, 470 class Olympic and World Championship gold medallist Malcolm Page and one more as yet unnamed crew member.

Farrell has chartered a boat out of the Brisbane Fleet, Thornburrow will use his boat that he keeps in Australia while the other two expected teams are hoping to make it to Mooloolaba if they can charter a boat.

After competing in the Etchells Queensland titles with Thornburrow and the Etchells Winters with Matt Chew, Farrell is returning to the event, but this time as a skipper. “I decided to grow up and become an adult,” Farrell quipped as he talked about his move to the helm. “The worlds have been a huge motivation. It’s not often you get a worlds coming to your home city. So that was a great opportunity for me to put a campaign together.

“I do have a long term plan with the Brisbane World Championships in 2018 well on my radar.”

He recently purchased Thornburrow’s hull 1269 and has been campaigning in Hong Kong towards the Winters and then the Hong Kong World Championship.

“The Mooloolaba winters is one of the best events in the region with a similar number of competitors and similar varied conditions so we saw the opportunity to use the event as a great training and learning event for our team, not to mention the opportunity to come and visit with some old friends.”

Farrell is out regularly on Hong Kong harbour racing with his crew, James Badenach and Ida Cheung, against the expanding Hong Kong fleet which boasts about 20 boats on the water every weekend from the 28 boats that are located on the Royal Hong Kong Yacht Club hardstand.

He has also engaged Jack Young to coach the new combination and move them up the learning ladder at a faster pace. “It’s helping with our processes and the way we set up the boat.”

While Farrell has most of his focus on using the hotly contested Etchells winters as a training event where he expects the best Etchells from around the region will again be on the start line, he will also look to use the winter event to prompt the Australian fleet members into entering the Asia Pacific Championships on October 24 to 26 then the Hong Kong World Championships on November 1 to 7.

In addition to the Hong Kong entries, there have already been entries received from Perth, Melbourne, Sydney and Brisbane.

The Notice of Race and online entry to the Marinepool Etchells Australasian Winter Championship are available from www.mooloolabaetchells.com.