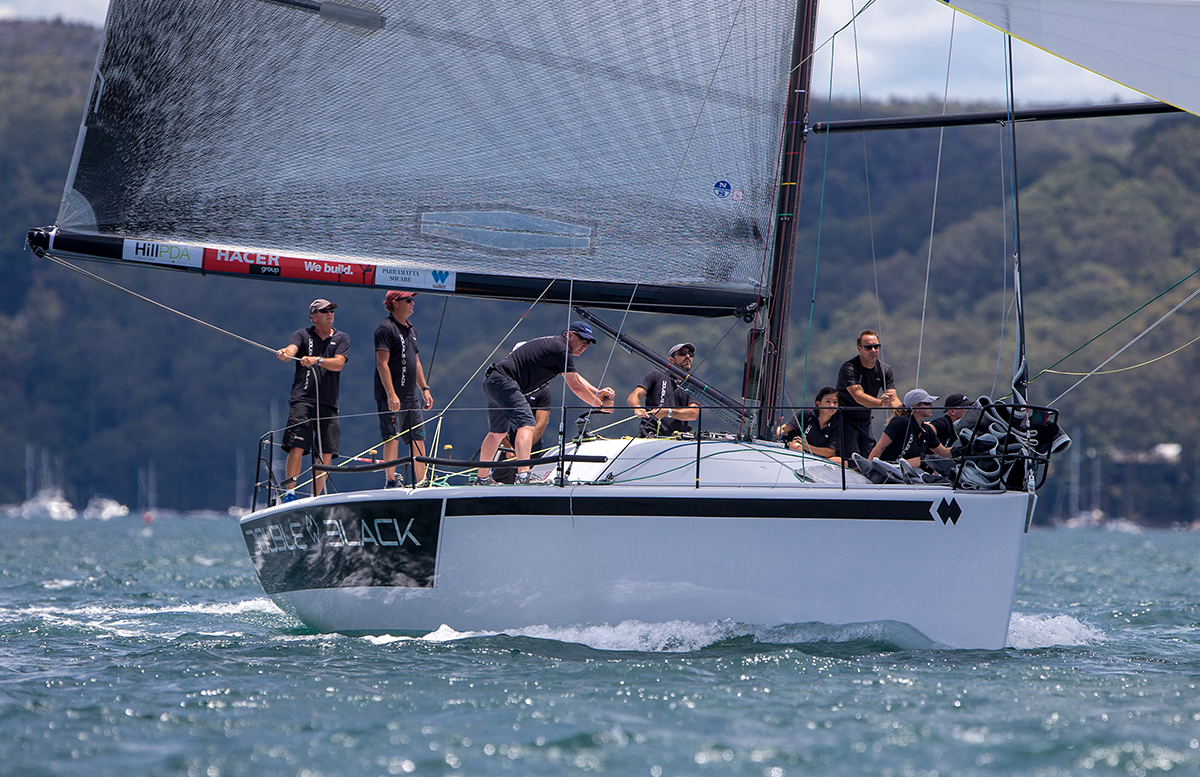 Pittwater, sometimes called ‘shift water’, exhibited its best and worst on day one of the Farr 40 One Design Trophy and still the race management team managed four races in breeze three to 15 knots between Taylor’s Point at Clareville and the offshore community of Morning Bay which fronts the Kur-ing-gai Chase National Park.

On Saturday afternoon, December 17, Martin Hill’s Estate Master crew was smiling having more often than not picked the right shifts, but they could well appreciate others’ frustration.

Estate Master’s tactician David Chapman said, “It was a typically tough Pittwater day, very shifty NW to SW and the whole team did a very good job staying patient. Our starts weren’t great so we were on the back foot but pulled ourselves to the front. Everyone had their moments, Double Black was up there, Joe de Kock looked good with Good Form and Mim (Massimo Belgiorno-Nettis) did really well for his first day of fleet racing driving Transfusion.”

“Three firsts is very exciting,” said the bubbly Hill on a steamy summer’s afternoon at the Royal Prince Alfred Yacht Club. “The NW going into a southerly with the hot westerly in between is always difficult, and racing in between Scotland Island and Taylor’s Point you’re asking for trouble.”

Newcomer to racing on the skinny inshore side of the Northern Beaches peninsula, Victorian skipper Rob Pitts and his Double Black crew were the only ones who managed to snaffle a win off Estate Master. “It was a game of snakes and ladders and we managed to pull out a win,” Pitts said. “It was really good fun and a nice sunny day; the westerly made it pretty tricky.”

“With one gust of 15 knots, mostly 8-10 knots and dropping down to as low as three, it was light and all over the shop,” commented PRO Steve Merrington. He thanked Ross and Jenny Scoble for the use of their Riviera called Passport as the Farr 40’s start boat.

The fleet is due to go offshore tomorrow and Hill and Chapman are all for racing off Palm Beach, to gain as much experience as possible as they prepare for their Etchells national title next month.

Owners will meet with Merrington at the RPAYC Sunday morning to make the call on whether to head to the Broken Bay offshore zone for the last three races starting 1000hrs, or set up for another inshore day in calmer waters.

A southerly up to 30 knots is due to hit Sydney overnight and there are some concerns the resulting sea state could make it too hard for the race committee to set the course marks. Sunday’s SSE breeze is forecast to moderate to 13 knots by mid-afternoon.