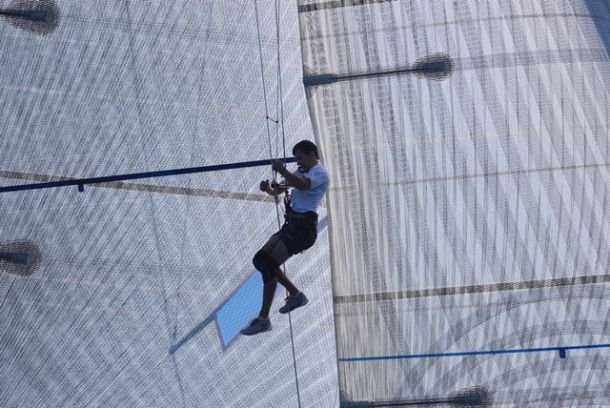 Two races finished off the series today, in which Estate Master maintained her strong performance. The only Australian boat contesting the Worlds, Hill skippered her to fourth and second places to finish on equal points with reigning world champion, Plenty, Alex Roeper’s American entry, which dropped from its lead position to second overall.

“We always knew they would be amongst our toughest competition,” said Hill, who was satisfied in finishing a place ahead of the 2013 world champion, Alberto Rossi’s Enfant Terrible (ITA).

It was not your typical sunny California today. Cloud cover caused the sea breeze to fight for rights with the gradient breeze on the offshore course area. Crews paid the penalty, finding the light 4½ to 10 knot vacillating and variable winds, mixed with an adverse 1 knot current, a handful to deal with.

“It was a very difficult day,” Hill admitted. “Funny, when we were heading out, there was 20 knots, but when we hit the start, the breeze had died to four and a half knots. It was hard going, with wind shifts as much as 60 degrees. It was like sailing an offshore IRC course – we even had reaches – it was very trying.

“We got a very good workout though and were happy to be up amongst the top six,” Hill said.

The harsh reality of Farr 40 one-design racing at the top level is every mistake is costly and every decision counts, as does every manoeuvre.

“At this level, you can’t make mistakes. You can’t afford OCS’s or being on the wrong end of a penalty – you have to be consistently good. We’re getting into that consistency now,” said Hill, who is representing Middle Harbour Yacht Club and Royal Sydney Yacht Squadron.

Hill, from Sydney, said the other key to winning each day meant being at the top mark inside the top five and evolving from there.

Estate Master’s crew will relax tomorrow before heading into the first day of the Worlds on Thursday, and they are prepared for the job ahead.

“We have confidence in each person’s ability on Estate Master and we all back each other up. Doing that builds a strong camaraderie, so we are feeling good, but there are six very good boats here…”

The Estate Master crew will gather all their concentration into finishing one better than their second at the 2014 Worlds. And with the runs on the board at the Pre-Worlds, along with new sails being broken out for the occasion, the crew now needs to cease the day.

Long Beach Yacht Club is playing host to the Rolex Farr 40 Worlds, to be held from 24-27 September. Estate Master is one of 17 boats from six nations entered.