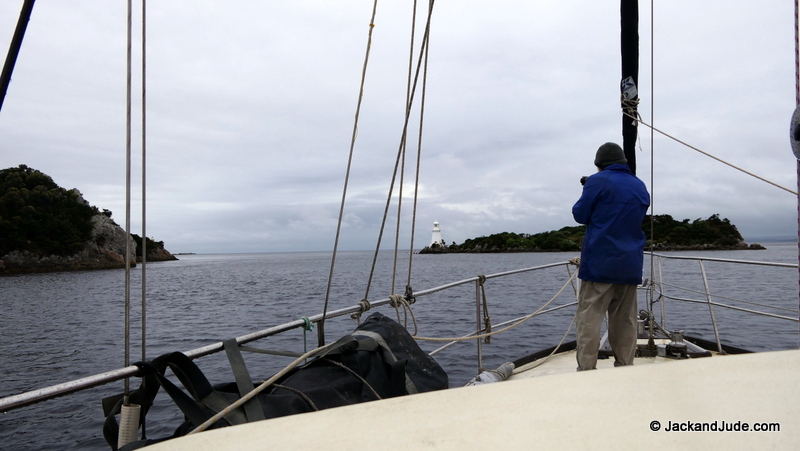 After nearly two years of peace and security inside Macquarie Harbour, the word daunting came to mind when we considered leaving that safe haven to sail the wild Southern Ocean. For such a long time our ship had been a palace of serenity surrounded by beauty, so just thinking of leaving that behind and trading it for the unexpected to forge across some of the most feared waters in Australia had our brains mentally shivering with weird thoughts of a dismasting or cracking open our fifty-year-old hull.

For sure Jude and I have earned our sea-legs, little used these last 22 months. But, oh my, as we prepared our ship and ourselves for the challenge we wondered if we were up to the task. Mind, the weather ahead looked good, a mere 20 to 25 knots with the wind right behind for the period of our exposure. And while that meant we’d be rolling like a pendulum suffering heartburn, all we’d have to do is hang on and let our ship take the punishment.

Decision made, announcements proclaimed, we had to go. Or did we? A little saunter to the green forested hills bordering the fabulous Gordon River seemed an attractive alternative. But no, it was best we test our once mighty sea legs. And so, with a little cuddle in the cockpit we promised each other that we’d take it easy, rather than suffer a fall and break another bone, or worse, suffer a compound fracture when far off Tasmania’s west coast.

When the first weather window arrived, we passed it up as it came on the backside of a middling LOW that was compressed by an emerging HIGH. Hmm, possibly a roaring lion with blustery conditions and rain, when what we really wanted was a purring pussycat. So we kept tackling our list of jobs, until three days later the perfect weather picture appeared on our screens – a big slow moving HIGH, a fat bubble more likely to bring steady winds.

After a better than expected sleep, the morning of our departure arrived bringing southerly winds laced with grey clouds dropping steady cold rain. Burr, it took a bit of insanity and plenty of pluck to climb onto the foredeck in pouring rain to roll up the awning and fold the sail cover, all the while wondering whether leaving another day wouldn’t be a better idea.

Dropping our mooring lines sealed our fate, especially when Jude pulled back the engine throttle to have Banyandah closing towards the narrow exit of our bay. Once out its protection and into Macquarie Harbour we found ourselves bashing into a head-sea with spray flying back at us that jerked our lazing eyelids wide open. It was a good thing the roar of the engine kept conversation to a minimum or we might have discussed letting this opportunity pass. But, made of tough stuff, we braved that cold wet with an eye on the ship’s clock as Banyandah crawled at a snail’s pace towards the channel leading to Hells Gate.