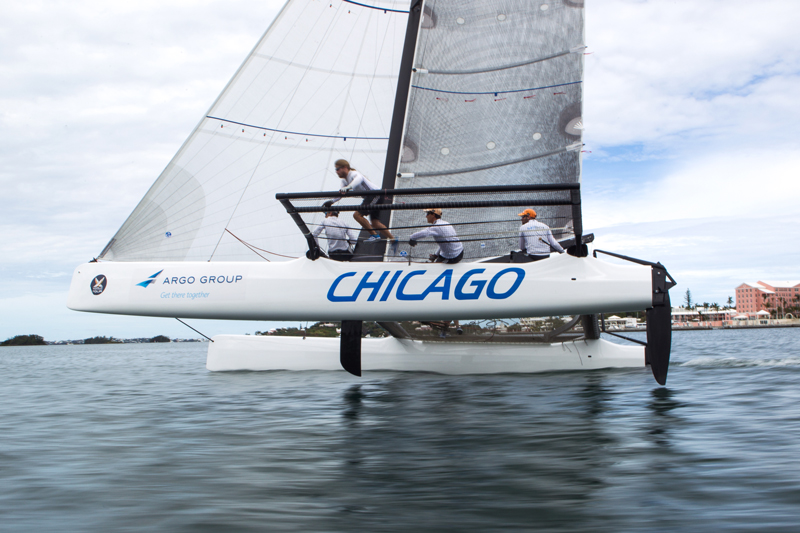 On a mission - Eric Monnin gets on the M32 in Bermuda © Robert Hajduk / WMRT.

London, UK (18th January 2016): He may not have the highest profile on the World Match Racing Tour (WMRT), however, Eric Monnin is among its longest serving participants, having first competed back in 2005/6. Straight after the Argo Group Gold Cup in October, the Swiss skipper was awarded a Tour Card for the new 2016 season racing the M32 high-performance catamarans.

Like Johnie Berntsson, Monnin is one of the few skippers on the WMRT to hold down a job in ‘the real world’ while also match racing at the very highest level. A physics graduate who moved into engineering, he spends 80% of his time at a company manufacturing sensors, appropriately in the department making ones monitoring airflow.

Monnin lives in Stäfa, on the shore of Lake Zürich, which he acknowledges is a terrible place to sail with weak, shifty winds, in extremis.

Growing up, he sailed principally keelboats, especially his family’s Surprise (a popular one design in Switzerland) but also tried his hand in the Optimist, Laser and 470 dinghy classes.

Monnin got into the match racing in the early 2000s when Alinghi was trying to develop match racing among Swiss sailors by creating their Swiss Tour. This comprised qualifying regattas and in the winner got to race the Alinghi crew that at the time included the 1995 and 2000 America’s Cup winning line-up of Coutts-Butterworth-Fleury-Daubney, etc. The first time Monnin went match racing in anger was on this circuit in Lugano, an event which they won. They then got to line up again the legendry Kiwis and, against all odds, managed to win again…

“So – we beat Russell Coutts in our first match race!” gloats Monnin, concluding a story he’ll still be recounting decades from now.

For Monnin, match racing has always been a family affair with his brothers Jean-Claude and Marc, who, more than a decade on, remain his tactician and bowman, albeit Jean-Claude more rarely these days. Jean-Claude worked at Alinghi for many years as a programmer and the Monnin brothers only began match racing regularly after Jean-Claude had returned from winning the 2003 America’s Cup. Surprisingly their first World Match Racing Tour event was one of the most prestigious – the Argo Group Gold Cup in 2003. Monnin and his team have competed consistently in Bermuda ever since, culminating in their second place in 2014.

Aside from the brothers, the team’s most regular crew is trimmer/tactician Simon Brügger, while five years ago they brought on board a new trimmer in Frenchman Julien Falxa. “Before we had a big problem in that we are all around 70kg, so very light,” explains Monnin. “Julian helps us at least partly resolve that – he’s heavy and very strong, which is good.”

2014 was Monnin’s most successful year to date. In addition to his team’s Gold Cup result, they won several Grade 2 events in Switzerland, but also the prestigious Knickerbocker Cup near New York. Thanks to this, they secured a Tour Card for 2015.

This year, while Monnin successfully defended his Knickerbocker Cup title and finished second at the nearby Oakcliff Invitational in August, his results on the World Match Racing Tour have been less consistent, ranging from second at Match Race Germany to a disappointing tenth at Stena Match Cup Sweden.

Going into the Monsoon Cup, this leaves him sixth overall in the World Match Racing Tour. However he is tied on points with Joachim Aschenbrenner and just one ahead of Reuben Corbett, while going the opposite way, Phil Robertson is 14 points ahead in fifth.

“Quite a lot can happen at the Monsoon Cup in Malaysia. For sure we’re not in a very comfortable position, but maybe that’s a chance too…” says Monnin hopefully. “And we have good fun there. Last year was the first time we’d participated and racing a boat we’d never sailed, we finished 4th, which was good. We have to remember what we did and come back with the same mind-set.”

Despite his long tenure on the WMRT, Monnin is perhaps better prepared than most to make the move into M32 catamarans: For a decade now he has been competing on D35 catamarans in Switzerland against major teams, like Alinghi. “Being able to combine my multihull and match racing experience with this new format, will be interesting, but I think everyone needs to learn a lot of things,” he says.

To date Monnin hasn’t got many hours in on an M32 but recognises it as a very different beast from the D35, which is almost twice as heavy: “It feels very light and it’s also very simple, which makes it pretty good for match racing.” The M32’s unarig, with no upwind headsails, will also take some getting used to.

With native classes like the D35 and the M32 high-performance catamaran, generally top Swiss sailors have more multihull experience than those from other nations. As a result, Monnin says that if he gets some new crew he will be looking first and foremost for match racing expertise. But he is keeping an open mind. “It will be very interesting to see how it all works out. We just have to go there and look at how it works.  I think there will be a lot of new things to discover for everyone.”

In addition to learning how to sail the M32 catamaran, Monnin and his crew are likely to have to get to grips with new racing formats too. “We’ll have to wait and see how much the game changes, especially on the racing rules. We’re just going to let things go where they go, we’ll follow and see how it works out.”

The season finale for the 2015 World Match Racing Tour season kicks off at the Monsoon Cup Malaysia beginning on the 26th January 2016.