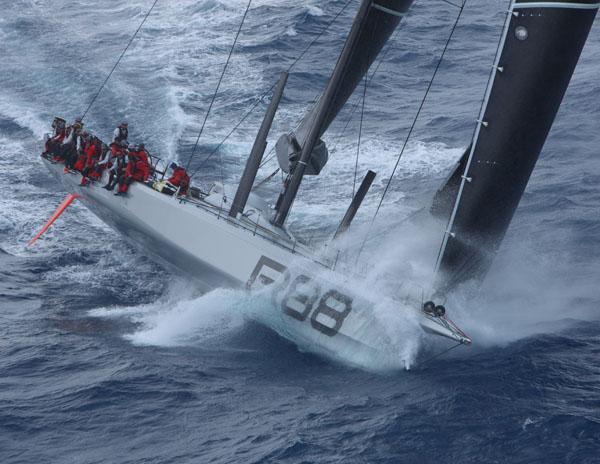 Rambler 88 during the Fastnet. Photo Round Ireland Race.

The 18th Volvo Round Ireland Yacht Race is set to be the most heated competition in the race’s history with a number of prestigious international sailing champions announcing they will contest this year’s edition.

The renowned race has received a major boost with Volvo Cars Ireland coming on board as title sponsor this year after four years without sponsorship.

At the Wednesday launch, race organiser Theo Phelan announced that Michael Boyd, the Commodore of RORC (the governing body of international yacht racing) and current holder of the international Commodore’s Cup, will return to compete in the 2016 race, marking the 20th anniversary of his Big Ears win in the 1996 Round Ireland, with many of the same crew.

Phillip Johnston has also confirmed that he will be entering the impressive Open 60  Artemis-Team Endeavour, the current holder of the Round Great Britain and Ireland Race, under skipper Michael Ferguson.

The current holder of the Fastnet Roger Justice trophy Rónán Ó Siochrú has also confirmed that he will be back to contest the Volvo Round Ireland for the fourth time.

At the end of 2015 internationally renowned sailor and US businessman, George David also announced his intention to enter his yacht Rambler 88 into the 2016 race.  The canting keel maxi yacht would be a strong contender to break the Volvo Round Ireland Race record of 2 days 17 hours 48 minutes 47 seconds which is held by Mike Slade in ICAP Leopard 3 achieved in 2008.

Meanwhile, following  the announcement that 2016 will be the first time that multihulls will be invited to compete, Team Concise have already indicated their intention to enter their world-class fleet. Ned Collier Wakefield, Team Director and Skipper for Team Concise, has indicated that they intend entering their 3 boats into the 2016 Volvo Round Ireland – the MOD 70 and their 2 Class 40 boats.

The Race only officially opens for entries next Monday (18th January 2016), however with the quality of entries already at such competitive levels, Race organisers expect the 2016 Volvo Round Ireland to be one of the most competitive and exciting races ever, attracting serious quality sailors and some of the finest yachts from across the world.

“We have further expressions of interest from some really exciting names that we hope to be in a position to announce in the coming weeks,” said Phelan. “Already the competition is heating up and we expect many previous race entrants to return to contest what is set to be one of the most exciting races ever.

“The new Volvo Cars title sponsorship is a paramount development in the expansion of the race, which allows us to plan ahead for the significant growth of the race in the coming years.”

2016 marks the 38th year of the biennial race, renowned as one of the world’s most gruelling off-shore challenges, attracting entries from the UK, across Europe and as far afield as Russia, the USA and New Zealand as well as the home country. Run by Wicklow Sailing Club, the Volvo Round Ireland Yacht Race is the only RORC (Royal Ocean Racing Club) race based in Ireland and is one of the longest off-shore races in the Royal Ocean Racing Club calendar, taking up to 7 days to complete. The first race took place in 1980 with only thirteen boats. Since then, held biennially, the fleet has grown steadily, attracting a record sixty boats.

The Race is regarded as near equivalent in terms of rating points to the Fastnet Race, the classic offshore race, which runs in alternate years to the Volvo Round Ireland.