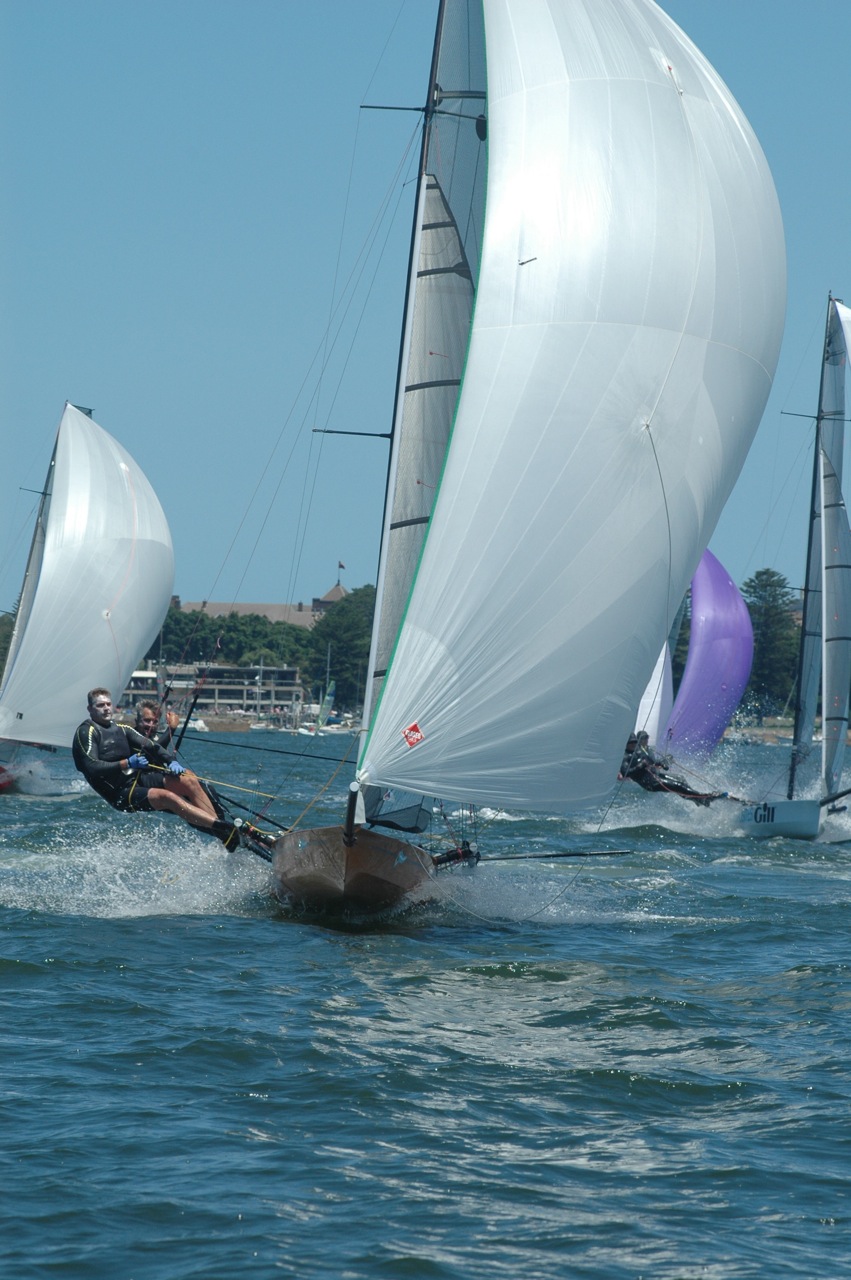 Brad and Footy lead a pack under kite. Photo I14 Media.

Hayter and Neighbour looked threatening from the invitation race and they showed new found consistency across a wide wind range to score 1, 1, 4, 1, 3, 1, 1, 4 to take the International 14 title from defending champions Brad Devine and Ian “Footy” Furlong.

Seven-time champion Devine was – as ever – a fierce competitor but gracious in defeat.

“No excuses,” Devine said. “Dave was fast and obviously made some good improvements, and they sailed very well. The rest of us need to play a bit of catch up.

“From where he was last year, he is quite a bit faster. I reckon his big gain is the foils …. they seem flexible … the rig is solid but the flex in the foils helps with gust response and that is something the Five 0 guys have been working on.”

Also working against Devine and Furlong was the fact they had hardly raced since the World Championship in Geelong last year. A situation not helped with Footy moving from Perth to Kalgoorlie.

The Brisbane-based Hayter certainly did more sailing but not without complications as his classy crew Trent Neighbour lives in Adelaide. His win was the first by a Queensland boat since Jason Beebe won in 2001 with crew Sam Reid and only the second in 50 years.

Hayter has been in Queensland for about five years and as there aren’t many 14s in the Sunshine State at the moment, he migrates his Paul Bieker-designed B5 boat El Diablo south to Melbourne each November where he and Neighbour regularly meet and race against the competitive Victorian fleet on Port Phillip Bay.

“Basically, we put a lot of prep in over the winter and then sail in Melbourne. It works for us and especially with a young family as we can’t sail all the time anyway.

“We’ve been better in the bottom wind ranges in the past and have been focusing on the improving boat handling in more breeze. We now have better speed in the top end. Changing the jib a little with a flatter in exit has helped.”

Hayter said his boat is a pre-preg carbon hull built in 2009 and assembled through 2010. The rig is based around a Bieker spar that has been modified by stiffening up the leading edge with carbon.

The sails are pretty much the same as previous years and are a product of Hayter’s work with his sailmaker father Alex who runs Alegayter Sails out of South Australia.

“The biggest change is with the foils. We changed to Glen Truswell designed foils (made by Gavin Tappenden at Composite Craft in the UK) and that has added another gear. They are a lot smaller, with the centreboard 4mm thinner, and we get a lot less drag. The foils do stall out if your not careful and if the boat stops you will go sideways. They can be a bit tricky, especially in the pre starts but they feel fast.”

Third place getter Chris Vaughan and crew Matt Balmer also had these Truswell foils and they were always threatening in the well prepared Ron Jeremy.

Hayter said he also changed from PBO rigging to carbon rod which he says is not as hard to handle as he thought. The carbon rigging is lighter, comes on a roll, is price competitive with stainless steel and has zero stretch which makes setting the boat up much easier as settings just lock in and there is little movement. As for packing it away, the rod “just rolls up” and goes in the trailer as normal.

While Hayter credits his rig, headsail and foil improvements as important, he is full of praise for his crew.

“We have been sailing together for about six years and Trent is just fantastic. He is the best crew I have ever had and is a real pleasure to sail with.

Hayter said Sydney was a challenging place to sail at times but he appreciated the courses set by former 14 champion and event PRO Peter Moor.

“I thought he did a good job and I enjoyed the confined race track. The shorter windward legs certainly kept it competitive.

“It was also good to race along with the Youth Nationals, who would have appreciated the 14s race hard.”

Hayter said he is now looking forward to the 2016 World Championship for the International 14 class which is to be sailed from 21 August to 2 September in Carnac, France.

“We are definately going and are locked in with this boat and this gear.”

The Australia 14 fleet is sending two containers and at least 18 boats to France to contest the Worlds which are expected to attract a total of about 90 boats. Some of the Australian crews are expected to sail their new Dave Hollom-designed i14s which are in the final stages of their build.

Brad Devine is expected to come back hard for the 2016 Worlds and while he admits he did not ‘have his race brain’ on for the nationals, he is looking at some key modifications to his B5 Del Boca Vista.

There is no doubt Devine is a competitor … it runs in his blood. His father Bill is a former 14 World Champion and he has just completed the Australian Championship in the Javelin class at the age of 77.

Meanwhile, Hayter saved his final comments for outgoing class national President Stewart Vickery who stood down at an annual general meeting held during the Sydney regatta.

“Stewart Vickery is a real stalwart of the class and has done a great job over a long time.”

In coming president Andrew Gilligan also paid his respects to Vickery who was the main driving force in Australia hosting the successful 2010 and 2014 World Championships in Australia.