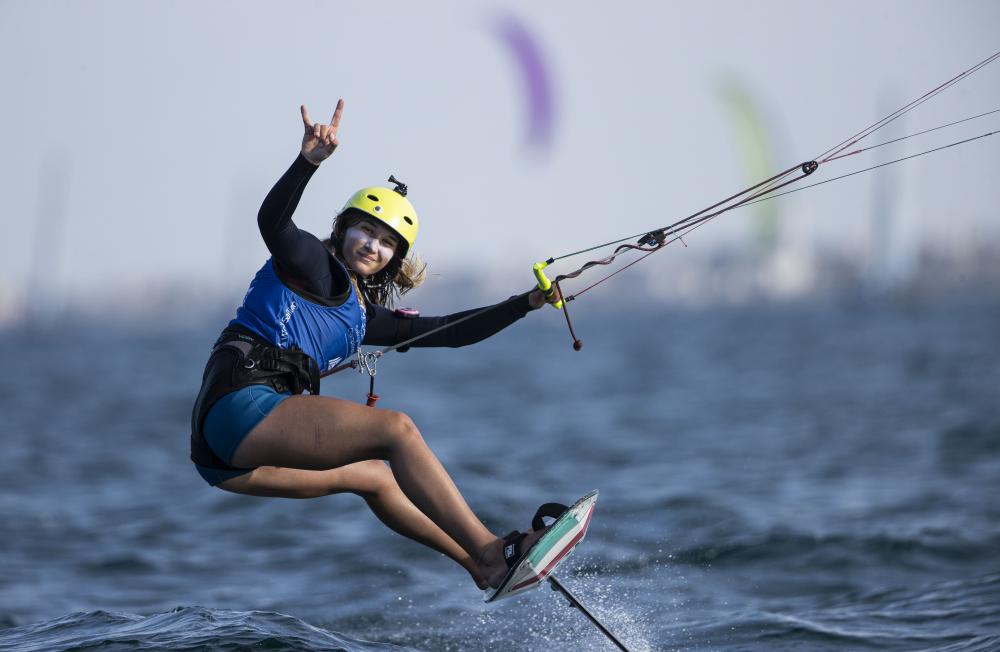 Oman: Winning is not the only thing that matters at the 2021 Youth Sailing World Championships presented by Hempel.

But when two sailors from emerging nations each win a race on the same day, that’s a reason for the whole sport to celebrate.

With 11 events due to be decided by the end of this Friday, Wednesday marked the halfway point of the competition for the 433 sailors from 59 nations. It was another afternoon of 6 to 10 knot onshore breezes which made for challenging tactical and strategic decisions on the race course.

Despite an uncharacteristically poor outing by Marie Jacobsen Lepperöd (NOR), scores of 15 and nine were still sufficient to keep the Norwegian top of the leaderboard, just three points ahead of Peru’s Florencia Chiarella. The light onshore breezes in Oman are surprisingly difficult to read, and it’s a test of patience and cunning that is resulting in high scores across the 46-boat fleet.

With all the boats supplied by German builder Ziegelmeyer, there is no boat speed advantage. This is racing in its purest form, which is all the more reason to celebrate victory for Mariam Ehab Mohamed Moustfa (EGY) in the first race of the day, followed by Agnese Caiafa (URU) in the next. Both the Egyptian and Uruguyan competitors were over the moon with this breakthrough in their young careers. “I am so happy,” said Moustfa. “It is a good feeling. One day I want to race for Egypt at the Olympic Games.”

Sebastian Kempe (BER) had the best day in the boys’ single hander fleet, scores of a third and first, lifting the Bermudan to second overall and just two points off the new series leader, José Gomes Saraiva Mendes (POR). Previous leader Ukraine’s Oskar Madonich (UKR) tumbled down the rankings to fifth but it’s tight in the front bunch with Przemyslaw Machowski (POL) tied on points with Bermuda and sitting in third.

Hugo Revil & Karl Devaux (FRA) should have been happy to have stayed top of the boys’ 29er fleet but the French crew seemed dissatisfied with their three races. “We did a penalty for Rule 42 [kinetics] and we lost a place in one race,” frowned Revil. Nevertheless the French wear their Maillots Jaunes going into the penultimate day, with a 10-point advantage over the Codoñer Alemany brothers (ESP) who won the last race of the afternoon. Other race wins went to USA in third and Argentina in fourth overall.

Charlie Leigh and Sophie Fisher (USA) seized back the yellow jerseys from Emily Mueller and Florence Brellisford (GBR), although the American advantage is a single point. With a 12-point gap back to Slovenia in third place, this is looking increasingly like a match race for the gold medal between the front two.

All the skiffs are supplied by Ovington Boats and most of the equipment is doing double duty for the girls’ and the boys’ fleets. The changeover at the beach in front of the big swimming pool and lounge area of the Barceló Mussanah Resort is where the 29er skiffs change hands at the midpoint of the afternoon, when the sailors from the first outing can pass on any tips to their team mates heading out for the second shift of the day.

Kay Brunsvold and Cooper Delbridge (USA) continue to make moves towards the top of the leaderboard after the Americans enjoyed the best set of scores on day three. Results of third, second and first lift the USA to second overall and just three points off the lead which continues to be held by Thomas Proust and Eloïse Clabon (FRA). Just two points behind the Americans are Olivier Jaquet and Femme Rixt Rijk (NED) in third overall.

Manon Pianazza’s (FRA) domination of the girls’ windsurfing continues as the French athlete worked her way to three more race wins today. Nine wins from nine races, and there’s little prospect of anyone being able to topple her from the top of the podium at this Friday’s prizegiving.

Nothing comes easy though. “I wish it was a bit windier, then it wouldn’t be such hard work,” smiled Pianazza, her muscles aching from pumping the Bic Techno rig through the warm air of Oman. Behind her a close battle for the next places, Kristyna Chalupnikova (CZE) holding a narrow advantage over Zoe Fernandez de Bobadilla Ramos (ESP) and Lucy Kenyon (GBR).

Federico Alan Pilloni (ITA) holds a lead almost as dominant as Pianazza in the girls’ fleet. Boris Shaw (GBR) looks equally secure in second overall, with Ozan Turker (TUR) in third overall. A few weeks ago Pilloni was suffering with a serious illness in hospital, so he is taking nothing for granted in Oman, despite the ease with which the humble Italian is winning.

“The mind and the body are feeling good, thanks probably to all the training I’ve been doing from the past two years,” said Pilloni. It’s quite likely that he’ll wrap up gold with a day to spare but he’s not counting his chickens yet. “I suppose it might happen, but you never know in sport.”

Who knew that dropping a banana skin in the water could ruin somebody else’s race? So sensitive and finely balanced are the high-speed kitefoilers as they hit speeds of 30 knots in just eight knots of wind, even running into a seemingly innocent banana skin can result in a head over heels crash.

On the day of the record breaking beach clean, Max Maeder (SGP) was delighted and relieved to have dodged any race-threatening debris to score three straight wins and move into the lead. Displaced from the yellow jersey, Riccardo Pianosi (ITA) was scratching his head about how to fight back for the lead. “Max had more speed today in the light conditions. I’m not sure what it is, but I need to work something out for tomorrow.” Mikhail Novikov (RUS) maintains third place but believes he can still close the gap to the front two.

Gal Zukerman (ISR) only took up kitefoiling a little more than a year ago but is proving the master of her art as she now notches up 11 straight victories. The gold medal is virtually assured for the girl who raced 420s at the Youth Worlds in 2018 before discovering the joy of kiting. Julia Damasiewicz (POL) is looking solid for the silver while Héloïse Pégourié (FRA) sits in third.

With the whole fleet competing in supplied Nautivela 420s from Italy, it’s the Spanish who are leading in both 420 divisions. Neus Ballester Bover and Andrea Perello Mora (ESP) hold the upper hand in the girls’ 420, four points ahead of Manon Pennaneac’h and Victoire Lerat (FRA). Vanessa Lahrkamp and Katherine McNamara (USA) are third.

Just five points separate the top four in the boys’ 420. Ian Clive Walker March sailing with Finn Dicke (ESP) continue to lead for Spain, but closely chased by Roi Levy and Ariel Gal (ISR) and Florian Krauss and Jannis Summchen (GER). Can Erturk and Ali Beren Adamcil (TUR) could yet jump onto the podium if the young Turks have a good day on Thursday.

Oman Sail has set a Guinness World Records™ title for the Most Nationalities Collecting Litter. Under supervision by an adjudicator from Guinness World Records™, participants at the Youth Sailing World Championships presented by Hempel, including sailors, Oman Sail officials, staff at Barceló Mussanah Resort and members from the OMRAN Group broke a new record with 73 nationalities collecting over 344 kilograms of litter at Mussanah public beach.

Competition continues on Thursday 16 December, starting at 1200 hours local time. To look back through the tracking from today’s races, and to follow live racing for the rest of the regatta, go to https://youthworlds2021.sapsailing.com

For full results, go to: https://worldsailingywc.org/results/