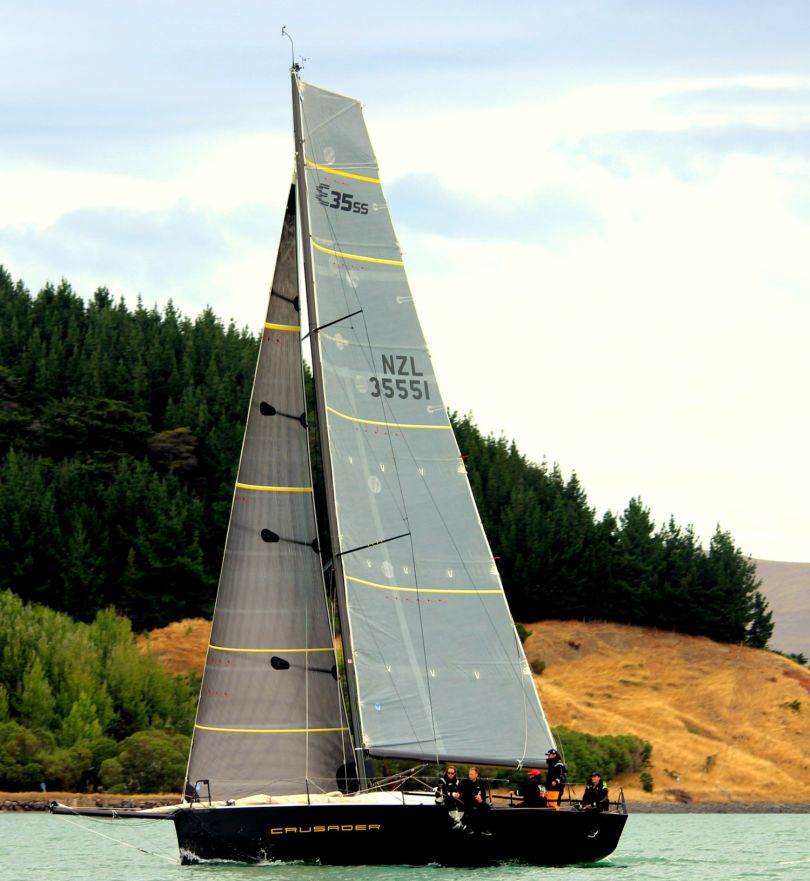 This hotly contested New Zealand race saw contestants undertake three legs, between Wellington and Akaroa, Akaroa and Napier and Napier and Wellington. Despite being one of the smallest yachts in the fleet, Crusader won all three legs on line, with the fastest overall elapsed time of one day, nine hours, 10 minutes and 25 seconds.

Crusader secured wins on the line by one hour in the first leg and two hours ahead of the second boat to cross the line in the second leg. The fiercely fought third leg saw Crusader hold off nearest rival Blink to come in ahead by just 51 seconds and secure a hat trick across all the racing legs.

Owned by Cantabrian businessman Anthony Leighs, this performance is Crusader’s third recent race victory, having won the Groupama New Caledonia Race at the end of 2014 and taken line honours in the 2015 Cook Strait Classic. The yacht is also the current record holder for both the sub 35ft and sub 40ft divisions in the Coastal Classic.

“Convincingly winning the Central Triangle race on the line, PHRF and IRC is a huge achievement for the Crusader team. Our Elliott 35SS is a fabulous boat, it has exceptional performance and is very manageable, especially in heavy seas,” says Leighs.

“We enjoyed some of the best sailing during this race since launching Crusader in 2012, especially the crossing of Cook Strait in 45-50 knots. The performance and reliability of the boat is quite remarkable and, coupled with a fantastic crew, is generating some great success.”

Both her owner and crew were delighted with the end result, citing her design as an important factor in achieving the end result. “Consistency was key to Crusader’s win in the race, and she was certainly the best all round yacht racing in the event,” said Josh Tucker, sales consultant, North Sails and race crew on board Crusader. “That ability to perform throughout all conditions was crucial to our success in the race.”

“The Elliott 35SS is a ‘heavy hitter’ punching well above its weight. The flat-out pace and reliability of the boat was a huge factor in our success during the Central Triangle Race,” said navigator, Chris Maddock. “We saw sustained periods of boat speed well into the 20s with a top speed of 27 knots and the boat performed flawlessly. You really have to experience these yachts to understand just how fantastic they are; a credit to Greg and the team at Elliott Marine.”

Developed as a racing yacht by yacht designer, Greg Elliott, the Elliott 35 Super Sport was developed as a design that would perform well in all conditions and wind types, both short-handed and with a full crew. “Crusader really is the little boat that could,” said Elliott. “She was designed to be an all-rounder that could tackle light winds, strong winds, and up and down wind courses all in equal measure, and for her size her performance capabilities are exceptional. The results she has achieved speak for themselves and really demonstrate both her versatility and the skill of her crew.”

Crusader’s sistership Bushido has enjoyed similar racing success, having also won several races including 1st on the line in the 2013 Coastal Classic Doublehanded Division, and several legs of the 2014 SSANZ Round the North Island Two Handed Race. Both yachts have clearly demonstrated the all-round capabilities of this high-performing design from Elliott Marine, with regular presence on race podiums.