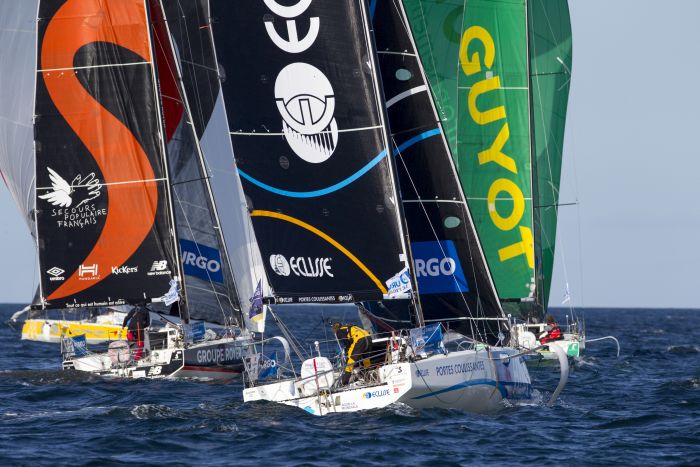 The northern latitudes of the Isle of Man once again will remain unconquered by the solo sailors of La Solitaire URGO Le Figaro, after the planned course for stage 2 of the 50th anniversary edition was radically altered to avoid strong northerly winds in the Irish Sea.

Instead of the scheduled 250 miles windward leg to turn at the Isle of Man and a downwind to the finish in Roscoff, the 535 miles course which started off Kinsale at 1700hrs local time today, Sunday 9 June, in beautiful sunshine and 12-15 knot westerly winds, will return the 45 boat fleet to their more usual hunting grounds of the Channel.

Rather then taking the fleet of brand new, relatively unproven Beneteau Figaro 3s into the Irish Sea and the strong tides of the St Georges Channel in winds forecast to gust to 35 or 40 knots on Tuesday, Race Direction chose prudence, sending the second stage direct to Bishop Rock, west of the Scilly Isles, then up into the relative shelter of the Channel to the Needles fairway buoy to the west of the Isle of Wight where the race turns to head to Roscoff.

If the course now becomes a classic Channel skirmish along the English or French coasts, chasing tidal gates and transitions, headland effects and local eddies, there was scarcely time for the sailors to complain, not that they wanted to. Due to dock out of Kinsale mid afternoon, the new course was given at 1130hrs this morning.

Hours, or even days, of pre-planning had to be scrubbed and a scramble to learn the pinch points, the transitions and tides, on a course area which is more familiar to most of the skippers and now renders three of the four courses on this landmark edition.

Top British skipper Alan Roberts tweeted his pleasure that the new course takes him to ‘home waters’ but the reality is there is never any real home advantage other than any feeling of confidence and familiarity on a coastline where he has won dinghy championships on many of the successive bays and estuaries from Cornwall to the Solent.

“All the guys here have sailed the south coast quite a lot,” smiled the solo skipper of Sea Cat Services who is looking to close a deficit of one hour and 49 minutes on race leader Yoann Richomme. “But I have done quite well on the south coast before. As for the late change, I think this changes the game a lot to see who can adapt quicker, who can read the weather and who can mentally deal with the change.”

The new course is some 100 miles shorter than the original planned. From Kinsale it is 125 miles to Bishop Rock, then 190 miles from Land’s End to The Needles and the strong tidal currents in The Solent. From the Isle of Wight there are 180 miles to Portsall off the Point of Brittany before turning 40 miles back in to the finish in Roscoff which should be taken by the leaders during the night of Wednesday in to Thursday. By the Scillies tomorrow evening the winds will be light before a reach in 12-13 knot northerlies which will die as the fleet gets closer to the Isle of Wight

Seeking to become the only skipper to win La Solitaire four times on this remarkable edition, Yann Eliès (Saint Michel) spoke in Kinsale about how he has had to refocus his overall target after finishing 22nd in stage 1 – three hours and 54 minutes after the leader. “I will need to go out and win a leg,” said the 44-year-old who was one of the nine different leaders during the first stage.

After a wonderful, hugely popular stopover in the picturesque Kinsale, which welcomed La Solitaire for the 20th time, Eliès set off like a man possessed this afternoon, and led at the first buoy after a three-mile upwind leg in perfect racing conditions. Roberts also made an excellent start and was mid fleet on the eight-mile sprint across the bay to the Radio France Buoy, Daunt Rock which is midway to the entrance to Cork Harbour.

A collision in the early minutes of the opening 15-mile prologue sees race veteran and past winner Alan Gautier (Merci pour ces 30 ans) heading directly to Roscoff with damage to his foil and rookie Benjamin Schwarz returned to Kinsale to evaluate damage to his yacht.

“The change of course is good news. Last night I was a bit worried. It is the first time I have been concerned after my personal briefing because on the course there were a lot of different obstacles, wind farms, oil and gas platforms and not many harbours to go into if there was a problem. Add in the shipping traffic and the fact we don’t know the boats that well in strong winds and I think this will be a good course, a good decision.”

“We knew for a few days that the northerlies would be strong all the way for a run from the Isle of Man to Lands End and it would have been a good downhill but Frances Le Goff saw the new weather files this morning and has decided it is not reasonable in this first season of the Figaro Benetau 3, so we must not waste any time, we just need to get on with the new course. We are back on familiar ground but the course is not too restricted because the legs are still long and there are the Traffic Separation Schemes to consider and there will be more strategy and breakaways on this course. So we stop ruminating and get on with it.”

Get the latest updates on the race website including the tracker (https://www.lasolitaire-urgo.com/en/ ).