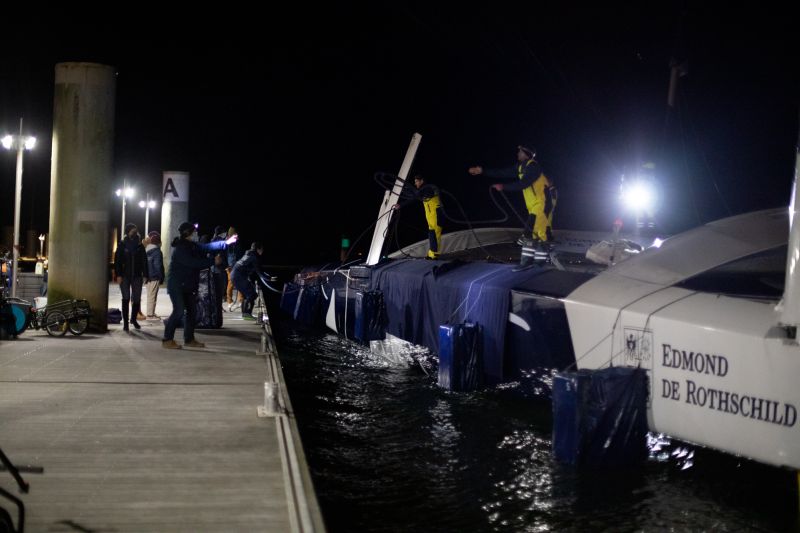 Lorient, Thursday, December 3rd, 2020 – Last Friday, after three days at sea on their first round the world record attempt, the crew of the Maxi Edmond de Rothschild opted to turn back after damage resulting from impact with a UFO.

Franck Cammas, Charles Caudrelier and their four crew managed to make it back to their port of registry in Lorient yesterday evening. A few hours later, the shore team had already set to work dismantling and repairing the damaged appendages in order to enable the sailors of Gitana Team to set sail again in as short a timeframe as possible, as soon as a favourable weather window opens up.

Indeed, there is no time to lose as the five-arrow racing stable’s objective remains very much intact: to set sail this winter to have a stab at securing the Jules Verne Trophy.

A long detour for the return journey

The Maxi Edmond de Rothschild had to take a big detour to the west of the Azores before she could point her bows back towards Brittany, a scenario Marcel van Triest had predicted as soon as the decision was taken to turn back last Friday.

“We had to quickly make a choice so as not to lose too much time during our return trip, which was already shaping up to be quite long. In 48hrs, a low-pressure system dropping down from the north and stretching up as far as the north of Madeira, generating 6 to 7 metre seas and 50 to 60 knots of wind on its western face was set to sprawl itself across our course. This phenomenon would force us to make a major detour, but it was a lot safer for the boat. Our aim is to set sail again very quickly, but to do that we need to know how to be conservative with regards the boat and the men.”

Charles Caudrelier, who shares the helm of the Maxi Edmond de Rothschild with Franck Cammas, shared his thoughts this lunchtime, after a good night on shore: “The mindset within the crew is positive. We hit something, which is unfortunate, but that’s part and parcel of the history of offshore racing. On a positive, the Maxi Edmond de Rothschild is not badly damaged so the repairs will be relatively quick.

“At sea, we noted a considerable difference in performance after our damage and we were certainly handicapped so in this regard the decision was pretty simple. The time set by the crew of Idec is going to take some beating and the slightest handicap is a real problem if we’re going to stand a chance of outpacing them. That really tipped the scales, especially as the upcoming weather didn’t look excellent to us and that seems to be how things are playing out.

“Another very positive point about this first attempt is the experience we gained doing it. We still lack sailing time and this week in race and delivery mode has been highly beneficial, as we don’t encounter such intense conditions in training.

“The boat will set sail again with a greater degree of reliability, and the crew will be all the stronger! We have this massive opportunity to be able to have another go at the record and today our thoughts go out to our friends in the Vendée Globe who won’t have this same possibility. We know how lucky we are, we just need to be patient!”

The special feature of speed records is that they can offer crews a second chance to attack them. It is this opportunity that the racing stable fitted out by Ariane and Benjamin de Rothschild is snapping up today by returning to its technical base to effect repairs and set off again with a boat able to sail at her true potential.

This Thursday morning, the whole of the shore crew had rallied together to dismantle the parts which need to be worked on. According to the first diagnosis, the latest addition to the Gitana fleet will likely be out of action for a good week before she can return to the water for a trip out to get her back in operation again.

“We have been working on preparing for the necessary repairs ever since the boat turned back. As such, this morning, everyone knew what they had to do and the dismantling and the usual structural checks were able to get underway very quickly. The job list is clear, but the time required for the repairs cannot be compressed down if we want to do things right; especially with regards the bonding and drying times on the foil,” explained the Technical Director, Pierre Tissier.

Right now, at the same time as the work being undertaken by the shore crew, Gitana Team’s weather cell is back in action observing potential weather windows. Indeed, once the Maxi Edmond de Rothschild is repaired, we’ll have to wait again and be ready to snap up a favourable weather window to attack the record of 40 days 23 hours and 30 minutes for the Jules Verne Trophy, which is the time set by Francis Joyon and his men in 2017.

Reminder of the events and the damage

25 November 02:26 UTC – The decision to switch to code green to set sail was made shortly before 20:00 UTC the day before. In Lorient, the departure sequence was very speedy and the latest of the Gitanas was soon making headway towards the start line and the island of Ushant at over 40 knots. The crew of the Maxi Edmond de Rothschild was keen to make the most of a front rolling through and a NW’ly breeze to set sail on the Jules Verne Trophy. It is 02:36 UTC on the dot when the Cammas-Caudrelier pairing and its men start the stopwatch and leave Le Créac’h lighthouse in the wake of their 32-metre flying giant.

26 November 14:00 UTC – On Thursday afternoon, whilst slipping along downwind at over 30 knots between the Azores and Madeira, the Maxi Edmond de Rothschild hits a UFO (Unidentified Floating Object). The impact is violent and immediately slows the 32-metre giant. Franck Cammas and Charles Caudrelier’s team alerts its shore crew and begins its investigations. The impact, which occurred around the rudder on the port float, and its trim tab in particular, has led to the breakage of part of the steering system. David Boileau immediately dons his boat captain’s hat and quickly effects a repair. After 1hr at a gentle pace, the latest of the Gitanas is back on track for her high-speed record. Visually, the rudder blade is not damaged, but the appendage proves to be hard to manipulate, which suggests that the system for raising and lowering the port rudder is damaged. For all that, checking this element is impossible as the area situated at the end of the float is too exposed and too dangerous to venture out to. The Maxi Edmond de Rothschild continues her journey towards the equator.

27 November 10:00 UTC – To adjust their trajectory towards the equator, the men of Gitana put in several gybes. During the second, undertaken in the early hours of the morning, whilst they’re sailing on port tack, those on watch on deck notice that the port foil is also damaged and the crew find evidence that leaves no room for doubt; it is the result of an impact, likely that suffered the previous afternoon.

27 November – 21:00 UTC – Despite the crew being motivated to carry on, there is a series of exchanges throughout the day with Cyril Dardashti, the manager of the team, Pierre Tissier, the Technical Director, and Sébastien Sainson, manager of the design office. Together, they conclude that the appendage can be repaired at sea, but the crew will no longer be able to sail the boat at her full potential, even after the repair. After consulting their weather router, Marcel van Triest, and given the position of the Maxi Edmond de Rothschild, namely less than 2,000 miles from the start, the decision is taken to turn back and return to Lorient to effect repairs so they can get back on standby as quickly as possible.

2 December 19:30 UTC – Five days after interrupting their record attempt, the six sailors on the Maxi Edmond de Rothschild make it back to Lorient, welcomed by the members of Gitana Team, who are ready to take up the baton.