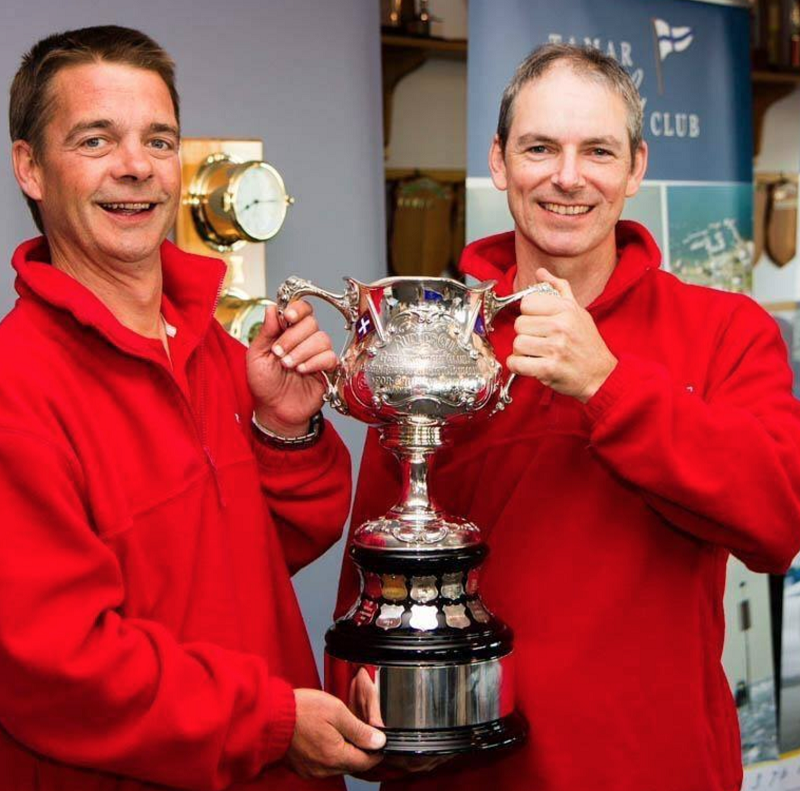 Jeremy Waldon and Aidan Geysen with their hands on the Rudder Cup in 2013 - pic courtesy ORCV.

The Victorian border is open and lockdown over, so a wide variety of boats and crews have come out of hibernation to quench their thirst for sailing – and what better way to celebrate a return to racing than with Australia’s oldest race and most historic trophy – the Rudder Cup – a pure silver trophy valued at $180,000.

To start on 27 December at 1115 AEDT, entries for the 195 nautical mile Melbourne to Devonport Yacht Race (Rudder Cup) is open to AMS, IRC, PHS, Double-Handed and 4+Autohelm classes. The latter two have become increasingly popular across all ORCV races, as have destination races such as this.

One of the new pairings in the race is that of respected veteran ocean racer, Ian ‘Barney’ Walker, who has joined forces with Jade Cole, who crewed the RP66 Wild Oats to second overall in the 2018 Rolex Sydney Hobart.

The Victorians are in it to take the Rudder Cup on their way to winning selection to represent Australia at the 2024 Paris Olympics in the new Mixed Two–Person Offshore Keelboat Event. To that end, the pair has invited Richard Grimes, their mentor/coach with 30 Sydney Hobarts behind him, to sail the race with them. The jet fighter pilot is a respected navigator with 30 Sydney Hobarts to his name.

Walker and Cole launched their Jeanneau Sun Fast 3300 a few weeks back. Their first two-handed race, plus one, will be the ORCV’s Cock of the Bay Yacht Race on December 26, followed by the Rudder Cup race the following day.

“They will be the real testers; the start of our Olympic campaign,” acknowledges Walker whose impressive CV includes three Whitbread/Volvo round the world yacht races, involvement in two America’s Cups, three Olympic keelboat campaigns and 32 Sydney Hobarts inclusive of two each of line honours and overall victories.

“Jade and I haven’t raced together in this format before, but we’ve been training for the last couple of months. We were behind because of COVID. The boat is brand new, so we’ve been getting it together,” ends Walker, who has raced with Cole across many fully crewed offshore and inshore classes in the past.

If they want tips on how to win the Rudder Cup in double-handed configuration, Walker and Cole need look no further than two teams that have trodden that path.

Brooke says of winning the Rudder Cup: “Any race you win two-handed against a fully crewed boat is a feather in your cap.”

On the positives to double-handed racing: “Auto pilot is good as it doesn’t go off watch, it’s better at steering in light and big weather and it doesn’t ague. George (Shaw) says it’s not in your best bunk and you don’t have to feed it!

“It’s a real joy to sail two-handed. I’m on my own on deck controlling a boat. I feel powerful and I enjoy the journey. Sometimes it can be scary, but you look at it as a challenge, and your brain kicks in and you do it. You have to manage things on your own. It’s tough at the beginning of the race. You have to be conservative – and you have to think ahead,” Brooke says.

ORCV Rear Commodore, Jeremy Waldon, won the Cup with Aiden Geysen on ‘Streetcar’  in 2013. Waldon says, “I would have said it was almost impossible to win the Rudder Cup as a two-hander, other than the fact that George and Robyn won the year before!

“It comes down to how well you and your co-skipper work together, especially on tactics. We agreed around a month out we’d sail to wind angle – and that is probably what won us the race. We also spent a lot of time beforehand training. It involves a lot of trust – you have to completely put your trust in your co-skipper and their skills and ability.”

Describing the end of the race, Waldon says, “Because of the trackers, we could how close it was. The last two hours I was trying not to tell Aiden (on his first Bass Strait crossing) how close we were. The last hour really blew up; we were in front then behind, in front, then behind. I didn’t even believe it when we crossed the line.”

Waldon, who still remembers the moment, admits, “It was on my bucket list to win, but I didn’t think it was achievable. The reception we got from everyone on the other boats was fantastic.”

The chase for line honours and the race record of 19 hours 32 minutes 56 seconds set by Prowler (Joe Westerlo) in 1998, will be led by the Cookson 50, Extasea (Paul Buchholz).

The Rudder Cup  starts off Portsea, approximately 60 kilometres south of Melbourne and finishes at the entrance of the Mersey River in Devonport, on the north-west coast of Tasmania.

Entries close on 7 December 9am, so please go online quickly for entry and Notice of Race: www.orcv.org.au/sailing/races/devonport