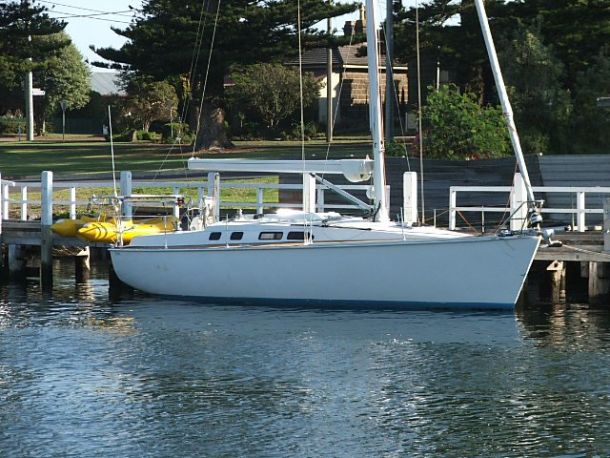 You often see “reluctant vendor” in advertising for second-hand goods, but in this case it is true. Owing to the fact that I just don't have time to use her, and I will be living in an area of very shallow water where she won't enjoy going, I am selling my seven-year-old Van de Stadt-designed Cat One blue water cruiser.

I lived aboard her comfortably for nearly two years and she has brought me safely through some huge seas and storm-force winds. But she should be cruising the Pacific, making a lucky couple very happy, not growing weed on a mooring somewhere.

Her first major journey was around Cape Leeuwin and across the Great Australian Bight, where she helped us through 58 knot storm-force winds and surfed comfortably down 5 metre swells. She holds her line beautifully when surfing and got me into Lakes Entrance without a problem when a SW storm was sending 3 metre waves across the bar.

I sailed her through the Bass Strait single-handed and up the east coast of Australia to Queensland. She then sailed across the Tasman Sea in the hands of adventurer Lisa Blair, to whom I'd lent her for the Solo Trans-Tasman Race. Lisa then raced her back to Mooloolaba, finishing 10th in the 13 boat fleet and successfully negotiating winds in excess of 60 knots.

The aluminium for the hull and decks was laser cut at Skipshelling Blom shipworks in the Netherlands from Van de Stadt's computer files, ensuring every part was millimetre perfect. They were then shipped to Australia, where the boat was welded together by Peter Moss of Moss Brothers. Peter learned his trade welding aluminium in the automotive industry, where tolerances are measured in microns, and went on to specialise in stainless steel, building most of the huge wine vats that you can see in any winery in the Margaret River region of Western Australia.

The fitout was done in American white oak, a strong timber whose light colour makes the cabin spacious. It was completed by a qualified cabinetmaker who had finished first in his TAFE class before spending years making bespoke kitchens out of Jarra and other native timbers.

The spars and sails are by Taskers in Perth, and being a WA boat the mast is hinged, allowing it to be lowered to get under bridges.

Initially the boat was fitted with a furling boom, which was a disaster. It was replaced in 2014, prior to the Solo Tasman Race, with an excellent Selden boom that has three reefing lines, allowing all reefing to be done from the cockpit.

The high-aspect, 7/8 rig provides an excellent balance between main and genoa and gives the boat her excellent speed in all conditions. The rig was professionally checked in 2014. Adjustable backstays were added at that time, as were the lazyjacks and the sailbag.

The original furling mainsail was re-cut in the Quantum loft in 2014 and reefing points were added. Because the furling boom didn't allow for mainsail foot tension to be adjusted, the sail has held her shape very well.

A new genoa was made in New Plymouth prior to the Trans-Tasman Race as the original had blown out on the delivery passage. There is also a very good Code-Zero which has rarely been flown (it was difficult to handle solo prior to being re-cut for the race but now furls perfectly). A second-hand spinnaker was bought for the race but I have not used it myself.

The only other mistake I made when specifying for the yacht, apart from the furling boom, was that I installed an electric engine. It proved to have no range for cruising and was underpowered, being unable to push through the tide at Port Macquarie and at Gosford's Rip Bridge, so I replaced it in 2013 with a 30hp Yanmar diesel which was installed by Yanmar's own engineer.

At time of writing it had done only 187.7 hours and Yanmar kindly donated a complete set of parts to Lisa before her race, which is included in the selling price.

The engine obviously allows recharging of the batteries, which are also topped up by four 40 watt solar panels via a maximum power point tracker. This device delivers up to 40% more efficiency by storing power and delivering it in bursts when output drops below a certain range.

The aft bank is generally used for house loads when cruising while the forward bank is reserved for operating the Muir anchor winch, which has just had the motor and gearbox replaced.

Instead of running a maze of wires around the boat, we installed a Capi2 bus system, as used on aircraft. This involves running a cable containing positive, negative and data cables the length of the boat and then clipping nodes to the bus cable. Apart from the simplicity and saving in weight (about 60% lighter) two other advantages are that you can add “consumers” at any point in the cable, and in the unlikely event of a system failure, cables can be run directly from the consumers to the battery to ensure essential gear can still function.

The electronics are the original Raymarine chart plotter, depth, log and wind instruments as well as a three-way repeater at the nav station. While they work perfectly well, electronics have improved since they were bought and you might consider updating before leaving on a major blue water experience.

The electronics include AIS and radar, an ICOM VHF radio and a TEAC television and ICOM CD player and AM/FM radio.

The layout is traditional with a large, light owners cabin forward, a big saloon with galley (two burner gas stove and oven) and nav station, a head and shower and a large aft cabin. There is good stowage throughout the cabins, with two hanging lockers and plenty of cupboards.

Both saloon seats have lee cloths fitted and are an ideal spot to sleep when sailing short-handed. The seat backs remove to make decent-sized bunks when at anchor. There is a folding table with fiddle-rails in the centre of the saloon.

The cockpit is ideal for blue water cruising in that it is deep and protected. It has four drains to Cat One standard. The decks and cockpit sole have been covered with a cork composite which I love. It is soft underfoot and very easy to maintain – a water blast now and again restores it to new.

There is a swim platform on the transom with a folding ladder. A dinghy can be hung from the davits which hold the solar panels.

The boat was fitted out to Cat One standards when she was launched and any out-of-date equipment was replaced in 2014 to get her a new certificate for the Solo Race. The four-man liferaft was serviced and an extra fire extinguisher was fitted. There are jacklines fitted in the cockpit and along both side decks.

There is an automatic bilge pump and two manual pumps, one in the cockpit and one below.

She is being sold with all safety gear included. That means the liferaft, a para-anchor which was successfully deployed in the middle of the Bight, a drogue which has never been used, radar reflector, orange sheet, first aid kits and six lifejackets. You will need to update the flares, which go in a grab-bag that is also included in the inventory.

Apart from that, she is ready to go cruising. She has just been re-painted and antifouled at Boat Works on the Gold Coast. She is now a “blank canvas” and can be re-named by the new owner and registered in whatever state that owner chooses. She is an Australian Registered Vessel, allowing her to sail overseas. That was a one-off registration that never needs to be renewed.

As I said at the beginning, the boat was built for the blue ocean. She should not be sitting on a mooring. As I won't have any opportunity to sail her seriously for at least another five years, I am reluctantly putting her on the market with an asking price of $179,000.

She is currently located at Russell Island in southern Moreton Bay. For more details or to arrange a viewing, email rogermcmillan@yaffa.com.au. 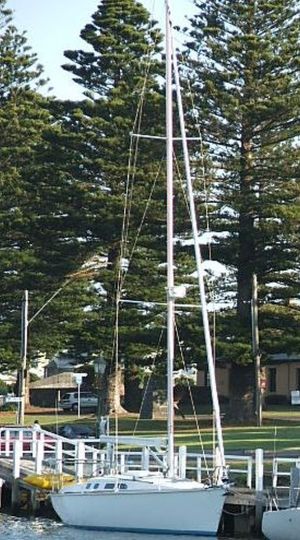 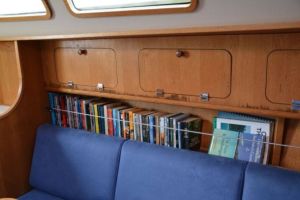