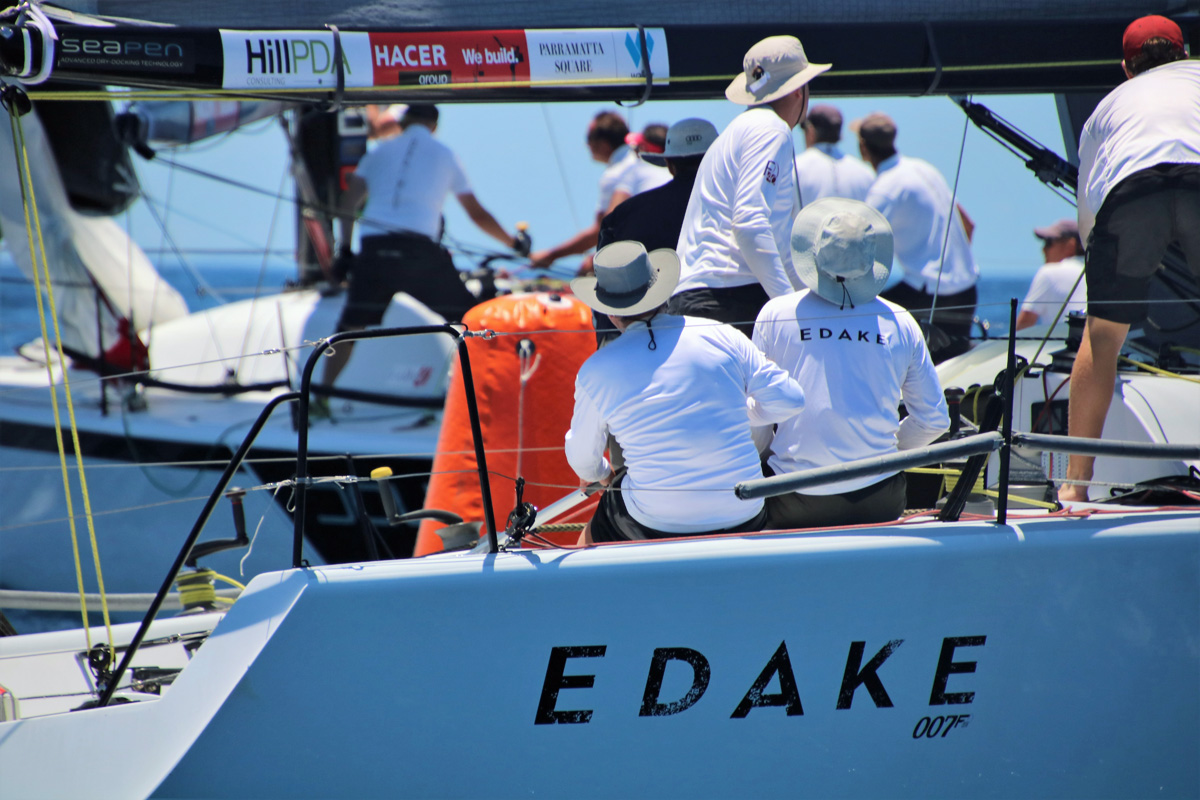 Jeff Carter’s day one whiff of victory at the Farr 40 Newcastle One Design Trophy turned into a blast when Edake rolled across the finish line first in all four races.

Carter has invested 11 years into high level one design racing with two different Farr 40s and on Sunday December 10, 2017 his Edake racing team scored their best set of results, and crushed the current national champion.

An emotional Carter attributed the victory to hitting the start line in a good position, sail design and crew work, which he says is up there with the pro teams.  “The boat is quiet and has speed. We’ve been working at this boat for seven years and all bar two are core crew from the lead up to the 2016 Farr 40 worlds in Sydney.

“We’ve been up there on day one before but haven’t managed to complete a series of eight races, and we’ve never taken four bullets in one day…that’s like the Transfusion days. It was humbling when Martin Hill (Hill PDA skipper) and Tom Burton (Olympian and Hill PDA tactician) came up afterwards and said we did absolutely everything right out there.”

Hill PDA went into day two of competition encroaching on Carter’s personal space but their mixed results in lighter winds and Edake’s unstoppable brilliance created a 14 point difference between the series winner and the runner-up.

Third on a countback was Rob Davis and Andy Baker’s Melbourne team on Nutcracker and fourth was the Novocastrian Farr 40, Joe de Kock’s Good Form, which finished the day with a solid second in the final race, 10 seconds behind repeat winner Edake.

De Kock knows the effort it takes to sail from Newcastle to Sydney with a crew and compete, and to have seven Sydney and Melbourne based Farr 40 teams return the favour is a mammoth undertaking.

“It’s awesome having everyone up here for one regatta, they are just a good bunch of people,” de Kock said. “Winds were light which was good for those who haven’t sailed together much before, and it was a great opportunity for local Newcastle Cruising Yacht Club sailors who filled in some crew gaps.”

Second to Edake’s faultless display, Rob Pitts’ Double Black crew, including heavy-hitter Will Ryan as tactician, made the greatest gains on day two, finishing second by just nine and 14 seconds respectively in races five and six.

NCYC race officer Ted Anderson set a course at the north end of Mereweather Beach and in 6-9 knots of SSE to SE breeze and flat water his team ran off the second half of the one design series.

The next regatta for the fleet is the weekend of January 20-21, 2018 out of Middle Harbour Yacht Club.