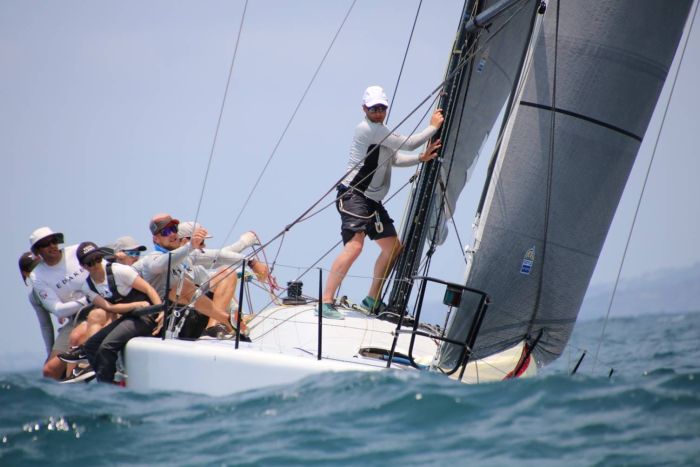 There was absolutely no stopping Jeff Carter and the Edake crew today as they smashed out two quick wins in races five and six, putting them so far ahead they had won the regatta before the last race had begun.

Carter had the win in the bag after the most spectacular finish in race six, where down to the last fifty metres Exile were three boat lengths ahead. Never to be underestimated, Carter caught a small vein of pressure giving them a hotter angle to the finish, where they pipped Exile by less than a quarter of a boat length as the race finished with cheers from spectators and crew.

“Today was very close racing. In race six we were able to work our way into second place behind Exile. We had to be patient on the last leg downhill and felt the boat end was favoured, so we broke away to the pin. Exile came back a little later and that’s when Harry (Price) and Alice (Tarnawski) decided to let them have the pin, while we put the speed throttle down to the boat end.

“We worked the lumpy conditions and crossed in first by the smallest of margins to take the win. We were not sure of how many points we had on the others but as it turned out we didn’t need to finish the last race of the day. We played it safe and gave Outlaw a run for their money and finished second. The back to back regatta wins is a good start to the season, however, we still have room for improvement.”

Reigning National Champion Tom Quick’s Outlaw narrowly snuck into second place and whilst they are not dominating as they did last season, they are always on the podium and the competitive team will be on the hunt for a win in January.

The Exile crew, with substitute helmsman Sam Hill, along with his rock star tactician Finn Alexander, were strong all weekend and just missed out on second place to Outlaw by one point.

Hats off to Bob Bennett and Tommy Spithill for organising the Youth Development Team on Enigma who impressed all competitors.

That’s a wrap for 2019. The next Farr 40 regatta will be held in January at Middle Harbour Yacht Club where eleven entries have been confirmed, as the rest of the fleet reunite and get down to business in the lead up to a massive year with the NSW State Titles, National Championships and then the big one, the Farr 40 Worlds 2020.

The Class would like to thank Royal Prince Alfred Yacht Club and all the wonderful staff for their superb hospitality and PRO Steve Merrington and the race management team, who are so committed to our great sport.