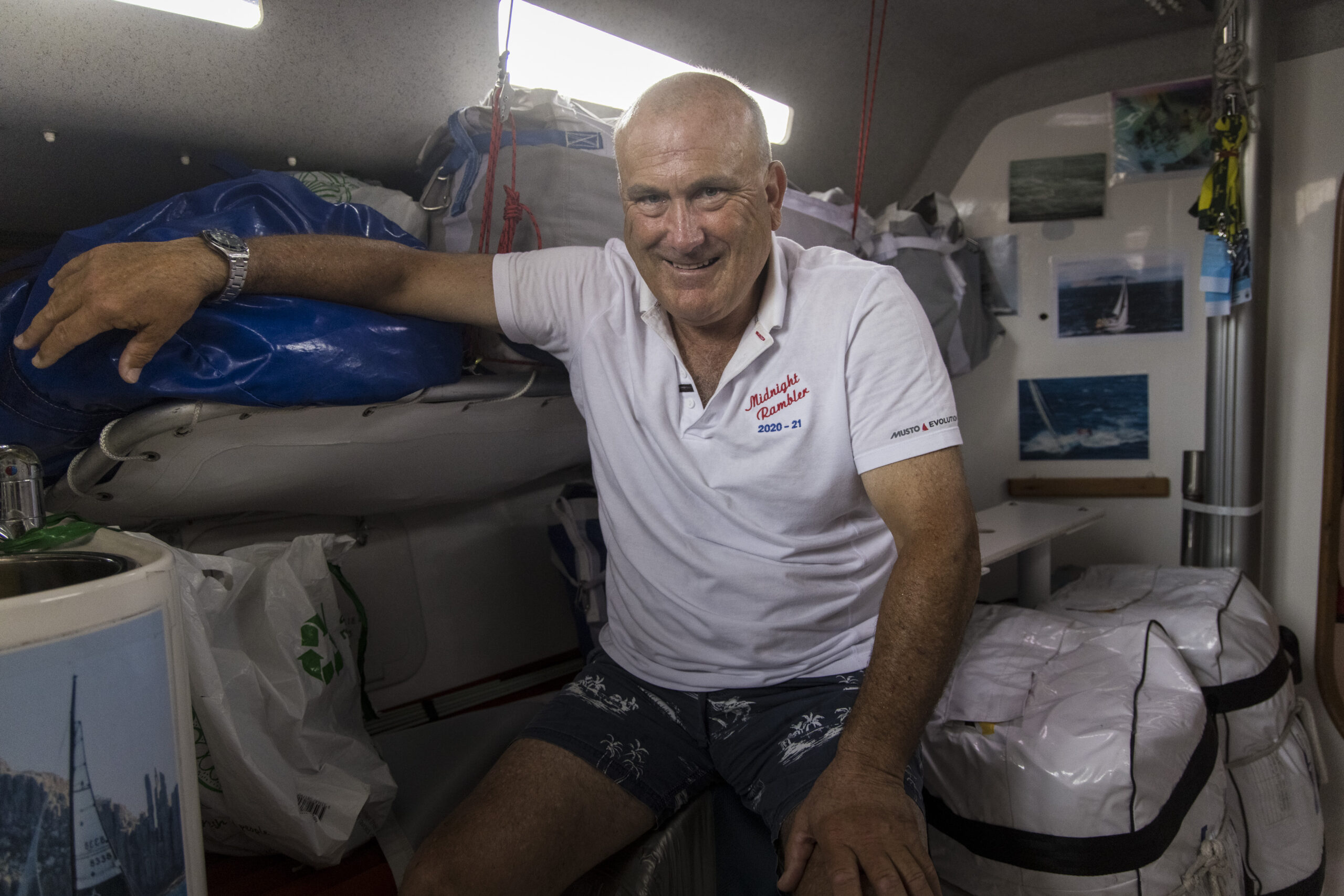 Ed Psaltis planned to stop sailing in the Rolex Sydney Hobart Yacht Race after 35 starts; he tried, but it didn’t work, and nearing his 39th participation, his enthusiasm for the 628 nautical mile race  – and his passion to win it overall – are strong as ever.

“I was going to give it up after 35 Hobarts,” said Psaltis at the Cruising Yacht Club of Australia today.

“I tried giving it up and that didn’t work too well. I got myself another boat and here I am, back again.

“I can’t explain what it is, but it is just something that’s larger than life. It’s outside of life. For me anyway. So yes, I’m still hugely excited about doing the race.”

Psaltis, owner and skipper of the Sydney 36 Midnight Rambler, believes his boat and crew really has what it takes to challenge for the Tattersall Cup, awarded to the overall winner.

In his crew are navigator Andrew Davison, who has sailed nine Hobarts. Six others include 19 year-olds Daniel Matzolic and Anne Stewart, who are in a relationship.

Psaltis believes the forecast for the start, with southerlies and ‘on the nose’ conditions, should suit Midnight Rambler.

Although Psaltis realises that in a forecast laden with uncertainty, anything could work for or against him – as it could for all 93 boats in the fleet.

“The first night is fairly locked in, dare I say, with southerlies, possibly sou’-easterlies. That’s good for our boat,” Psaltis said.

“What we don’t want to see is the fast guys flying past by night time, with their spinnakers up, never to be seen again.

“So it looks like it will be on the nose for the first 24 hours. Our boat goes like a scalded cat as my dad used to say, when it’s on the nose.

“After that, who knows? I’m hoping we’ll get more clarity as the day comes closer to us.

“It looks like there will be a fair bit of reaching and I think we’ve got some good reaching sails that have minimised what used to be one of the boat’s weak points. So, we reach okay.

“It’s all about speed versus rating… possibly some medium running in 10 to 15 knots, maybe 20 knots, which again is okay for us because the big guys don’t really go [in that].

“Some of the big guys will still create problems for us because they are so well sailed,” says Psaltis who won the race in 1998 on AFR Midnight Rambler.

“There’s also some small boats behind us that we’ll be looking at over our shoulders, which we give a lot of time to.

For Craig Neil, owner of the TP52 Quest, skippered by Mike Green, key to winning will be maintaining the high boat speeds that TP52s are capable of and limiting mistakes.

“The 52 fleet is going to be incredibly competitive. We’re out racing every week almost, which makes the class so competitive,” Neil said.

“We’re always out there adjusting our speed and course off each other, looking at each other all the time.

“You’ve got to play a percentages game. We’ve got that wrong a few times this year… in races where we haven’t really played the percentages game correctly. And we lost out.

Michael Spies, a veteran of 43 Sydney Hobarts and skipper of the Schumaker 54, Maritimo, owned by Bill Barry-Cotter, says the boat is primed to race.

They have not had a restricted preparation for the Rolex Sydney Hobart due to being based on the Gold Coast.

“We have had a solid lead-up. We haven’t been subjected to the COVID lockdowns like some of our opposition,” he said.

Maritimo took Line Honours in the 2021 Brisbane to Gladstone Race.

“We’ve made sure to keep an ongoing program. We’ve probably done  six or seven major events up there this year with the same nucleus crew.”