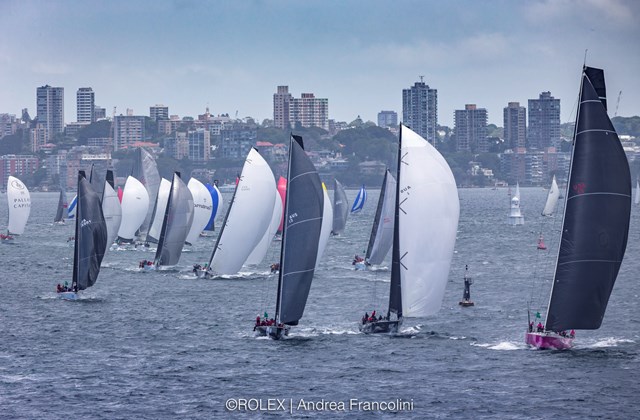 Moneypenny, Blink and Mako are early casualties of the Cruising Yacht Club of Australia’s Rolex Sydney Hobart Yacht race this evening, a strong southerly of up to 30 knots on a heavy seaway has taken its toll this evening.

All on board the three yachts are fine and the teams are returning to Sydney, leaving 85 boats racing.

Sean Langman’s Moneypenny, a Reichel/Pugh 69, suffered a broken forestay. She was an overall contender for the Tattersall Cup and was nicely placed in 10th on the water, so Langman and the crew will be hugely disappointed.

Blink, owned by Mark Gorbatov and Mark Siebert, retired with a torn main. She was one of seven competitive Beneteau 40s in the fleet. Mako, a Sydney 40 owned by a syndicate from Newcastle and skippered by Tim Dodds, is yet to advise their reason for retiring.

CYCA Rear Commodore Bradshaw Kellett, the navigator on Christian Beck’s line honours leader, LawConnect, described the conditions that led to the retirements. “It’s pretty miserable out here. It’s horrible. I’m hiding in the hatch putting on my wet weather jacket. You can’t see,” he said from south-east of Kiama at around 1820hrs.

“We’re about 3 nautical miles ahead of Black Jack (owned by Peter Harburg and skippered by Mark Bradford). They’re heading inshore for the first time. Scallywag (owned by Seng Huang Lee and skippered by David Witt) is catching us up a bit.

“Offshore is our route of choice, so we’re heading out there now. It’s lumpy – a 3-metre seaway, swell running one way – sea another. We’re currently in the process of slowing down a bit. We’re in 28 to 30 knots. We were doing 13.5 knots but slowed to 8 knots. Big waves. It’s seasick weather for those who are prone.

“Tony Mutter is at the helm. All the professionals are on deck,” Kellett said.

The Sydney yachtsman told how they were buried at the start of the 628 nautical mile race. “We couldn’t accelerate, but it wasn’t too bad. Once we got out of the Heads, we were OK and in clear air.

“While we are uncomfortable at the moment, we are happy with our progress.  We just have to get through these next few hours,” he ended.

To follow the race and for all information, stay locked right here on rolexsydneyhobart.com.