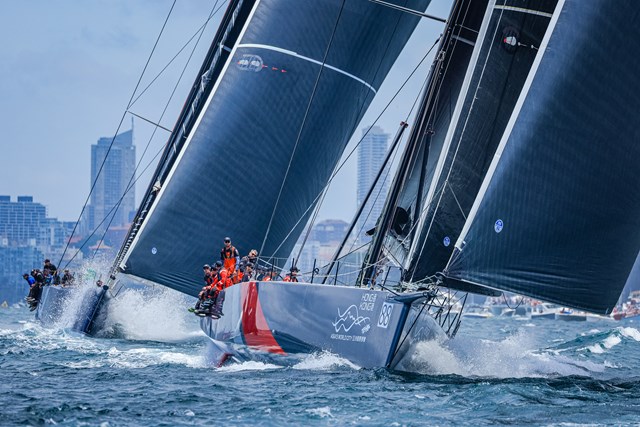 SHK Scallywag 100 skipper David Witt was reminded of how tenuous fortune can be in the Rolex Sydney Hobart Yacht Race, when a furling disaster after exiting the heads cost him the race lead on line honours following a spectacular start to this year’s 76th edition.

SHK Scallywag 100 produced the first upset of this year’s race by leading the fleet of 88 at the first and second marks, with the two other 100-footers, Christian Beck’s LawConnect and Peter Harburg’s Black Jack, skippered by Mark Bradford, in their wake.

Behind the three 100-footers were the Botin 80 Stefan Racing, skippered and co-owned by Grant Wharington, then Philip Turner’s Reichel/Pugh 66 Alive, skippered by Duncan Hine, David Griffith’s JV62 Whisper and then the Reichel/Pugh 69 Moneypenny, owned and skippered by Sean Langman.

Of the TP52s, the early leaders were Matt Allen’s Ichi Ban and Gordon Ketelbey’s Zen.

Impressing early among the 17 two-handed boats that are racing the event for the first time was Eora, owned by Rupert Henry and co-skippered by Greg O’Shea.

Meanwhile, at the back of the fleet and second last out of the Heads was the Halvorsen 36, Solveig, owned by Annie Lawrence and skippered by John Whitfeld. In their wake and in last position was the Jarkan 925 Gun Runner, owned and skippered by Murray Stewart.

For Witt, in his 25th Sydney Hobart and still without a line honours win to his credit, it was the perfect start, considering the 15-25 knot southerly winds were better suited to LawConnect. While the other two 100-footers sailed with a full main, Witt put a reef in, so maybe had better control in the already big breeze.

All three 100-footers started the race on the western side of Sydney Harbour and as expected, shot away from the fleet. Matching their pace early though, was Stefan Racing.

However, by the first mark, the three 100-footers had edged away, and Scallywag put distance on the other two, beating them around the turn. She then led to and around the second mark where the open water was extremely lumpy and awash with spectator fleet.

It was soon after the second mark that disaster struck Scallywag, allowing LawConnect to take the lead with Black Jack in tow, followed by SHK Scallywag 100.

As the Cruising Yacht Club of Australia’s 628 nautical mile race continued south down the NSW coast, Scallywag’s Instagram account briefly explained what happened in a post.

The post read: “Shortly after passing the Heads, the yacht suffered a technical issue with the J2 foresail tack fitting. The crew managed to get the sail down safely and get the orange storm jib up in the air while they worked to repair the problem.”

The 1pm race start was spectacular. Morning sunshine prevailed, even though clouds in the distance forewarned of the prospect of some showers and thunderstorms later in the day.

The Bureau of Meteorology’s forecast this morning before the race began was for a southerly of 15 to 20 knots with the likelihood it would increase to 25 knots outside the Heads, with the possibility of 30 knot winds later, as well as showers and thunderstorms.

Conditions for the first two days are likely to remain similar, although winds could shift to the south east as the feet heads south. Meanwhile 1.5 to 2.5 metre waves are expected.

The fleet dropped from 89 to 88 shortly before the start when the Corby 49 Vamp, owned by Donald Graham and Leander Klohs, withdrew from the race.

The David Stephenson-skippered boat withdrew due to one of its crew being confirmed as a close contact of a positive COVID-19 case. All crews in this year’s Rolex Sydney Hobart underwent COVID-19 tests before the race.