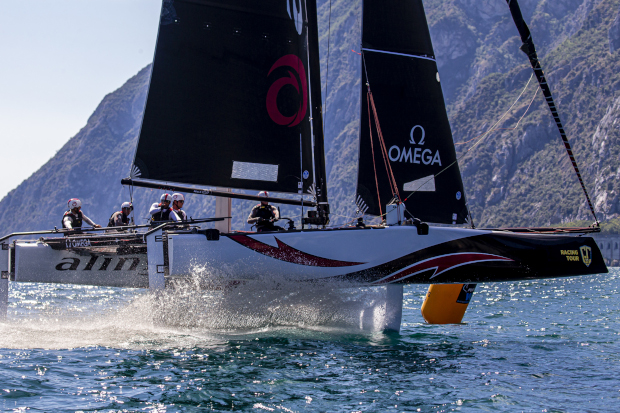 Ernesto Bertarelli’s Alinghi team showed some of their GC32 World Championship-winning form when they came out on top after the first of four days of racing at the GC32 Riva Cup, being held out of the Fraglia Vela Riva at the northern end of Italy’s Lake Garda.

In today’s five races, all held in the southerly Ora wind of 8 to 13 knots, the immaculate Swiss team never finished a race deeper than third and ended the day four points ahead of second-placed Red Bull Sailing Team.

The race course off Riva del Garda is famous for the dramatic cliff face and 1km tall mountains on its west shore where typically there is good pressure and shift. However the lake was in much more fickle mood once racing started after a half hour delay just after 1330, leaving the tacticians on the one design foiling catamarans truly having to earn their money.

“It was tricky with the shifts, but it made the race course really interesting – nothing was over until the end,” said Alinghi helmsman Arnaud Psarofaghis. “The fleet is really compact so you need to be careful and push the boat really hard.”

Alinghi today claimed the first race after a head-to-head with Red Bull Sailing Team and then won race four effectively from the first upwind leg. “We got some good starts and Nico [Nicolas Charbonnier – tactician] picked up some good lanes upwind and from there it was almost over, but we kept focussed on the other boats and we tried to control the fleet,” continued Psarofaghis.

Perhaps helped by playing to what will be the nearest he comes to having a home crowd this year, Red Bull Sailing Team skipper Roman Hagara and his fellow Olympic Tornado legend Hans-Peter Steinacher, had an exceptional day off Riva del Garda. As Hagara explained: “There is a group coming and there are some old sailing friends who were here last week and decided to stay. And we’re close to Austria… so our fan club is here!”

Hagara says they improved at the last GC32 event, Copa del Rey MAPFRE, and have also benefitted from training here. “We had a good feeling today. The guys are doing a really good job onboard, so you can really do any manoeuvre you like and can place your boat wherever you want. I can rely on these guys.”

Thoughout the day almost all the teams had a taste of leading the fleet thanks to the shifts or one side of the course paying, occasionally launching the backmarkers into first place. But there was some science to it too: “It was not like a standard day on Lake Garda – the wind was so shifty and it wasn’t all on the right,” observed Argo’s exhausted-looking tactician Sebastien Col.

Jason Carroll’s US team Argo missed the last GC32 Racing Tour event but is back with a vengeance. The Argonauts won today’s third race and were runner-up in the last. “It was good, but very challenging for the crew,” Col continued. “The fleet seems to sail in a very small part of the race area so all the boats are close together and any mistakes make a big difference. It was good racing.” While there were some dramatic gains to be made on the runs, Argo won race three by picking a good lane of breeze on the second upwind.

Coming off the water equally delighted was Zoulou’s Erik Maris, whose team was lying second overall going into the final race but finished the day third and leader of the Owner-Driver championship here. “The day was fantastic for everyone,” said Maris. “Conditions, the surroundings, the racing were perfect – seriously I can’t remember having enjoyed a sailing day as much as this one for a long, long time, plus we had some good results. All-in-all it was a wonderful day.”

Zoulou won today’s second race, helped by gaining a beneficial shift on the final run. “As always the boys did a fantastic job. Our tactician made some good calls. We were fast and probably we were very lucky as well,” Maris concluded.

Racing at the GC32 Riva Cup is taking place with the support of Garda Trentino, Riva del Garda Fierecongressi, Distilleria Marzadro and Omkafé and continues tomorrow with a first warning signal at 1300.

Those interested in being part of the event can now sign up for a VIP guest experience which, depending upon the package, can permit access to the GC32 Lounge, watching the racing from a spectator boat and even sailing on board. More information can be found here or contact: grazia.odasso@youreventgroup.it