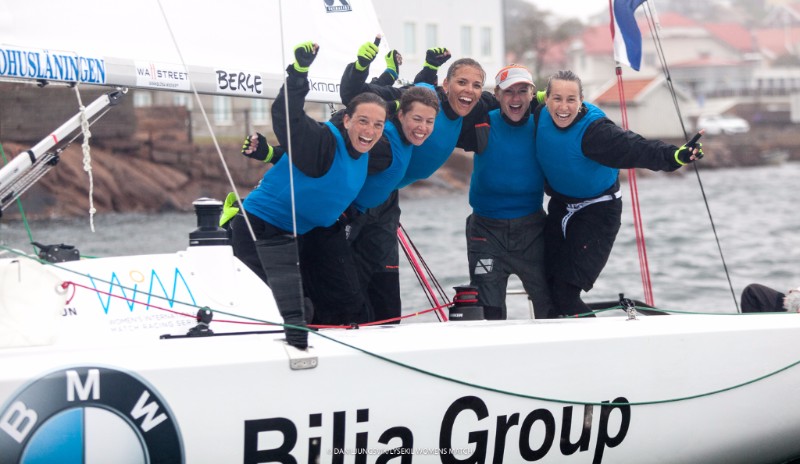 Dutch Olympian Renée Groeneveld and her crew have won the Lysekil Women’s Match, beating Pauline Courtois, FRA, 3 – 1 in Saturday’s final on the second stop on the 2017 WIM Series.

“My crew did a very good job today, to keep the boat going in all the very intense matches. It was really tough,” Groeneveld said.

Defending champion and local hope, Anna Östling of the Royal Gothenburg Yacht Club, took the bronze after a 2–0 score against Trine Palludan, DEN, in the petite final.

When Saturday’s racing kicked off with the semi-finals on the waters of off Släggö in Lysekil, on the beautiful Swedish west coast, it was obvious that the racing temperature had risen.

Within just a few metres distance, the delighted spectators were able to follow the world’s foremost match racing women in extremely tight and exciting fights. With a prize purse of SEK 300 000 (USD 37 000), and coveted WIM Series points at stake, no one wants to give even a millimetre, but finally both semis finished 3 – 1 in the favour of Courtois and Groeneveld.

Then the Dutch and the French team had to face each other in the final, starting exactly when clouds with rain and increasing breeze came in over the racecourse. Groeneveld won the first fight, but Courtois immediately broke back to 1–1.

“I think we had a quite comfortable lead, but Pauline came with pressure from behind on the last downwind, and managed to pass us at the finish,” says Groeneveld, who then secured her victory by winning two straight matches.

“Honestly we made no big mistakes today, but not even small ones are acceptable when facing Renée. She’s done an amazing job all week,” Courtois praises her opponent.

After the semi-finals it was evident that home sailor Anna Östling wouldn’t defend her Lysekil title from last year. Instead she had to reload to avoid becoming fourth.

“Of course we had much rather raced in the final, but now we’re satisfied with a podium position. We’re very happy that we focused and delivered in the bronze matches, though we didn’t really have the speed advantage we’re used to. It’s always fun to conclude an event with a few wins” said Östling, who advances to second place on WIM Series as half of the events are done.

The World Championship silver medal at the beginning of the summer, and the triumph here in Lysekil, takes Groeneveld & Co to the top of the WIM Series leader board. Trine Palludan is on third, on the same point as Östling, while Courtois holds fourth place. Thanks to her 5th place in Lysekil, Swede Caroline Sylvan advances to the same place on WIM Series. Events in Korea in October and US Virgin Islands in December still remain.