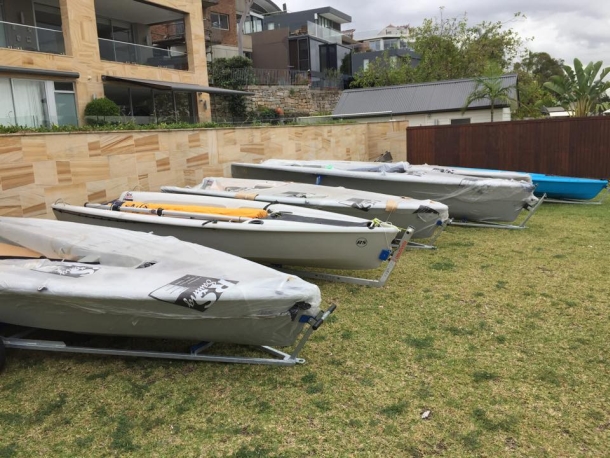 Yesterday saw the dawn of a new era at Drummoyne Sailing Club, as the newly acquired training fleet arrived at the club via high-security semi-trailer. A bunch of willing helpers were able to come down an assist – some came in suits, some in more suitable boat moving attire.

A fleet of 6 boats now rests on the DSC grounds, in time for the Drummoyne Sailing Club Sailing Academy (DSCSA) inaugural Holiday Courses in April. The boats will be used for general training, holiday camps, learn to sail courses, the leisure of our members and to spark some inter-fleet competition!

We have acquired 2 RS Visions and 4 RS Fevas. However, we haven’t got our full fleet just yet – with only 2 Fevas arriving and 2 Visions. We have in the meantime been lent a Feva and a RS Tera by the distributers until our boats arrive on Aussie Shores.

The official launch date for the fleet is the closing day of the 2014-2015 Summer Season, the 29th of March and all are welcome to attend.

It has been a long time coming, but the boats are here and the Academy is almost open for business!

If you are interested in learning to sail or improve your skills, don’t hesitate to get in contact with DSC’s Sailing Manager, Alex South. Alex can talk you through your options and point you in the right direction. She is contactable via email – alex@drummoynesailingclub.com.au.