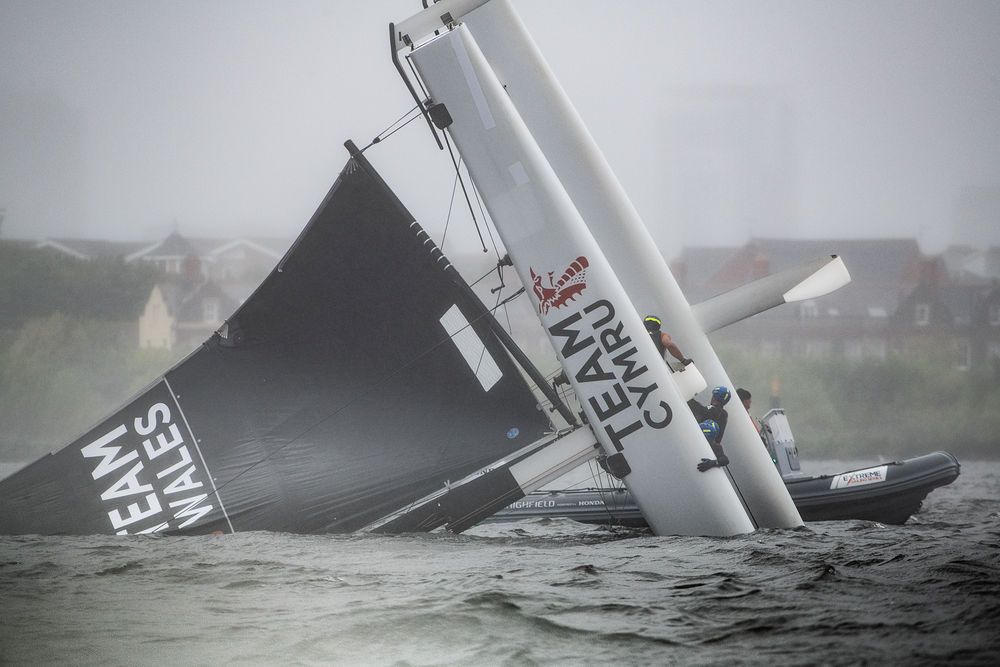 Cardiff Bay was alive with action today, as two boats capsized within moments of each other on the Extreme Sailing Series racecourse.

Charging downwind on the third race of the day (race 19), the Omani boat and Team Wales were both caught by strong 20 knot gusts that caused their hulls to become submerged and a cartwheel capsize to ensue.

All crewmembers on Team Wales were accounted for and there were no injuries to anyone onboard. Although the boat was righted quickly, foil damage unfortunately prevented the local wildcard team from competing for the rest of the day. With their boat recovered to shore, the Extreme Sailing Series technical teams began work to ensure the Welsh crew can compete on home waters on the final day of the event, Monday 27 August.

Just metres away, safety teams tended to the capsized Omani boat. The crew's mainsail trimmer, Pete Greenhalgh, was taken to shore to receive medical attention for an injury, whilst the Extreme Sailing Series safety teams swiftly righted the boat.

“Well, we went for a little swim!” said Phil Robertson, the team's skipper, on the dock. “It wasn't the most ideal situation. We went round the top mark and you have to go straight into a gybe. With two sails up, you're going pretty fast and we obviously made a few mistakes. We were hit by a gust that flipped us over pretty quickly.”

With no further injuries or boat damage sustained, the undaunted Omani team radioed for a reserve sailor to join their crew, in the hope that they could continue to race. Being a boat down but not done fighting, Team Wales skipper Adam Piggott answered their call, jumping on board the Omani boat to end the day on a high.

“I wanted to help them out,” explained Piggott. “Once we got going, we scored a third and a first. They were keen to clock some points so hopefully not too bad a day for them!”

“The boys were stoked to win the last race of the day,” added Robertson. “It was a great way to finish and to cheer us all up.”

Team Oman Air closed the day on the podium in third.

Racing in Cardiff had been hindered throughout the day by strong winds and torrential rain. Early on, Race Management decided not to send the fleet of Flying Phantoms out this morning, with GC32 racing postponed until 15:15 local time.

In challenging conditions, some teams fared better than others. Whilst Act leaders SAP Extreme Sailing Team extended their lead on the fleet and hit the fastest speed of the Act so far – an impressive 34.3kts achieved in race 18 – British INEOS Rebels fell through the ranks, giving up their spot on the Act podium.

“It was a really hard day for us,” admitted the team's skipper, Will Alloway. “We just couldn't seem to pick the right spots on the course. On the plus side, our boat handling was a lot better but we've still got a way to go until we're at the level we need to be. We'll see what we can do tomorrow.”

The final day of racing is due to get underway tomorrow at 10:00 BST/UTC+1 for the Flying Phantoms and 14:00 for the GC32s. With the last race of the day worth double points for both fleets, the teams at the top can't yet sleep easy – the Extreme Sailing Series is anyone's game.

The event's free-to-enter public Fan Zone will be open all day in Britannia Park and next to the Norwegian Church, offering entertainment and activities for all the family.

GC32 racing will be streamed LIVE from 14:00 BST/UTC+1 tomorrow, accompanied by expert commentary from Niall Myant-Best and Stevie Morrison.

For more information on the Extreme Sailing Series, please visit their website.