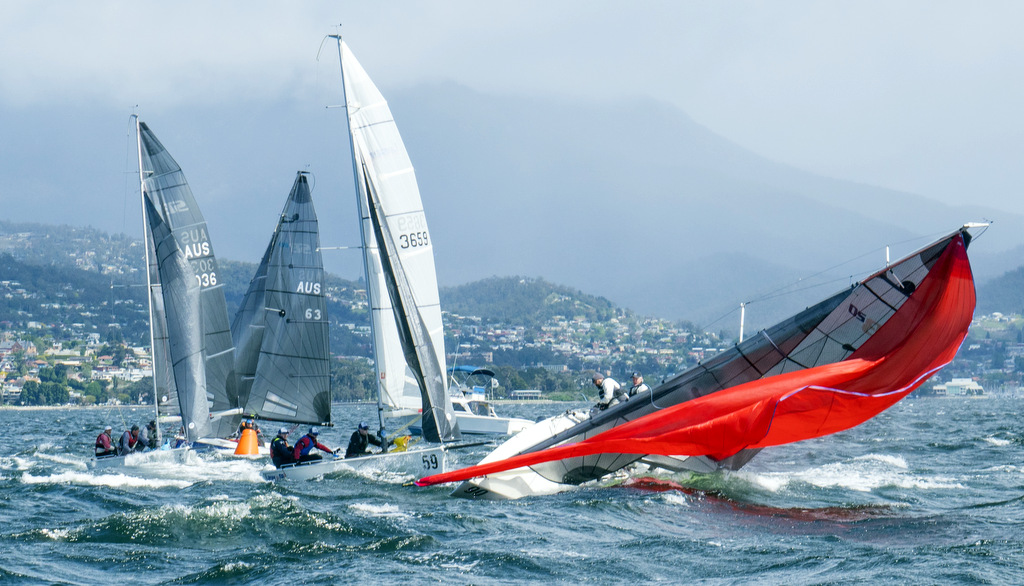 SB20 in a big broach attempting to carry a spinnaker in 30 knots. Photo Jimmy Emms.

Snow on the mountain, cold showers on a chilly 12º morning,  plus a rather dire forecast for very strong winds, failed to dampen the enthusiasm of more than 150 youth and adult sailors who went out on the Derwent today to contest the BMW Showdown in one-design keelboats and dinghies.

Unfortunately, there were some unwanted consequences, the female skipper of a 29er injured her knee and ending up in hospital, two dismastings in the SB20s and many retirements from most of the off-the-beach classes.

One of the SB20s dismasted was helmed by Rod Jones who flew down from Mooloolaba in Queensland especially for the regatta.  They was being helmed by local skipper Greg Rowlings.

Jones, who imported the first SB20s into Australia, finished third in race one and then saw the rig of the boat collapse running under spinnaker in race two.

The Queenslander was quite philosophical about the incident, praising the course area on the Derwent where the SB20 Worlds will be sailed in January 2018.   He hopes to sail on Sunday,  with race officer Stephen Shield aiming at four, possibly five races in more moderate weather.

Despite gusty and shifty westerly winds that ranged from near 0 knots to 30 knots, RYCT race officers completed four races for the 29ers, NS14, Laser Radial and Laser 4.7s and three for the other classes.

Only two races were sailed in the SB20s because of major changes in wind direction and strength, with gusts along Eastern Shore and 30 knots plus kicking up short seas on the river.

After two races, only four points separate the first five boats on the pointscore.

Former champion Sharpie sailor Frazer Read, sailing Pinch, with Will Logan and Justin Wells as crew, is on 6 points and a first and 5th, one point ahead of International skipper Export Roo (Michael Cooper) sailing with a stand-in crew as RYCT Commodore Matthew Johnston found himself with ‘chocolate wheel’ during at his children’s school fair.

Another point back on 8 points is Honey Badger (Paul Burnell) followed on 9 points by Karabos (Nick Rogers) who won race two. On 10 points is Team Musto (George Peacock).

Lily Zeeman and her younger sister Annabelle,  sailing Godscend,  showed the sailing skills that has won them a place in the Australian team to contest the International Cadet Worlds in Argentina in late December/January. They sailed consistently for a 3-3-2 result to be on 8 points, one point ahead of fellow team member Will Cooper and Hugo Allison, sailing 9 points.  Third overall on 11 points are two more of the Zeeman family,  Charlie and Will Zeeman, sailing Drop Bears.

Brothers Hugo and Rupert Hamilton are just one point apart after four races for the high performance 29er class. Hugo, sailing HH with Hugh Hickling as crew,  had two wins and a second but did not compete in race three. Rupert and Flynn Sprott, sailing Amnesia failed to time start of race one and were ruled OCS.  However, they recovered well with 2-1-2 result in the next three races. Third overall after one is Loose Wedge (William Wallis and Brendan Crisp).

Jasmin Galbraith and Chloe Fisher, sailing Skiffy, won the first race but Jasmin’s injured knee and hospitalisation ended the day for them.  Diagnosis revealed that the knee problem had not happened today but was a torn meniscus, the result of another sport.

Peter and Claire Cameron put in a fine performance in the NS14 class, sailing Gumblossom to three wins and a third to be on 6 points. Second overall is Magic & Loss (Barrie and Magnus McIndoe) on 10 points third is Bumps (Joshua Eggins and Aiden Wilkins) on 12 points.

With the NS14 Nationals being held at Midway Point Yacht Club this summer, the BMW Showdown is an important regatta for the class.

This is another class that is holding their Nationals on the Derwent this summer, hosted by the RYCT.  Today’s three races produced three winners: Crude Oil (Sam Jones), Loose Cannon (Daniel Maree) and Not today!, sailed by Ruby Edmunds  from Launceston.  After three races Lucy Cooper leads the pointscore in Mini Cooper, 9 points, from Tamar River sailor Ruby Edmunds (Not today!), 11 points,  and Taylor Edmunds (Whisper) on 13 points.

Optimists: Two Sandy Bay Sailing Club junior members, Ethan Galbraith (Bombora) and Oscar O’Donoghue (Button Grass) share top of the leaderboard.  Ethan has scored 4-1-1,  Oscar a 1-3-2.   Oscar has recently returned from being the only Tasmanian sailors in an Australian team that sailed in Noumea.

RYCT Off-the-Beach sailor Joshua Ragg (No-Limit) dominated the Laser Radials in a small fleet of eight,  winning three races and finished second in the last race of the day.  Josh Jones in Wind Whister was the only other race winner,  but is in fourth overall.   Ragg has 5 points the board, followed by Josh Harriss (High Voltage) and Max Gluskie (Big G).

The lighter weight Laser sailors contested the 4.7s with George Scott finish the four races with 9 points from a scorecard of 2-1-2-4.  Nick Smart won three races but was OCS in race for a total of 11 points.  Third overall is Fraser Marshall on 13 points.

Given the fact the Flying 111 Nationals will be Hobart this summer the turn-out today of just two boats was disappointing. Sisters Nicola and Lara Recape scored three straight wins form Oliver and Oscar Pritchard.

Not unexpectedly,  only two Finns were racing with Jock Calvert winning all four races from Angus Barton.  Jock has his sights on national competition in the Olympic class and has already sailed impressively on the mainland.