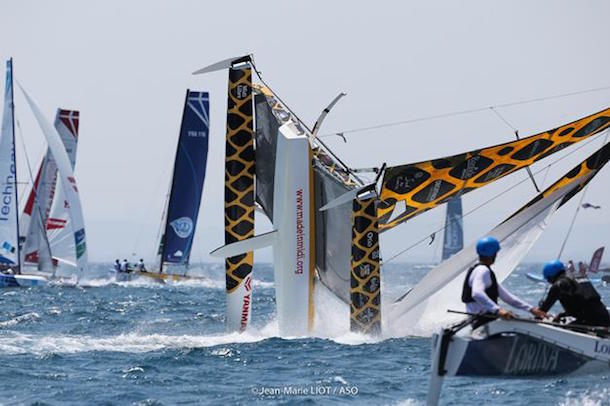 A drama and action packed second day in Roses with two capsizes and a collision.

It was a crazy day on the water today in Roses, Catalonia, with thrilling 25 knots gusts delivering the most physically demanding racing in the Tour so far. Two boats capsized: Made in Midi, in the qualification races, and Sobedo, in the Gold Final while leading the fleet for a podium position ! And PRB crashed into Vannes Agglo, forcing the two boats to retire from the race 3. But Combi West was enjoying the strong breeze. They won three races today finishing the day in top position to win their second Act in a row after Les Sables d'Olonne. Groupama's lead overall in now down to 12 points, and with six more racing days to come until the end of the event,  anything can happen.

“We took a great start in the final and we had a nice lead over the rest of the fleet,” explains Moana Vaireaux, Sodebo trimmer. “We are disappointed because we could have avoided it. We eased the gennaker too late. We were so happy to be going fast and leading. It's a supid mistake. But we are happy with the first part of the day because we sailed well in strong breeze.”

“Luckily no one got injured in any of the capsizes and collision. The teams will just have a fix a few gear failures and breakages tonight. But it will be a race against time as the boats are being dismantled tonight to be delivered to Gruissan for Act 7 to start tomorrow morning.

“It was physically very demanding today and now we need to rest. We will arrive in Gruissan late tonight so we will have a look at the weather forecast while driving up north. I think the most important tool in the Tour is the 12V-220V converter to use the computer in the car,” said CombiWest skipper Fred Guilmin in a laugh.

He was all smiles when he came back to the paddock after racing. Fred Guilmin and his crew were in top form today on Roses race course. “We are so happy. It was beautiful. We sailed well. We can feel the progression and it feels great. We are going to try and keep winning races.  We are still far from Groupama overall (12 points) but we are getting closer and I hope they start being anxious about it. Our objective is still the same : to do well, and let them make mistakes.”

Groupama skipper Franck Cammas was onboard today for the last time, as he heads to Portsmouth tonight for the America's Cup World Series. “Twelve points lead is not much. It was difficult today and we haven't sailed that well. The crew configuration was new, but I trust them to finish the Tour as well as they have started it.”

Also to note the fantastic performance of Normandy Elite team who scored two race victories and a second place today, finishing second of Roses Stadium Racing day. “I am so happy,” said skipper Charles Hainneville. “We had solid breeze, but it was not too bad. We've hard worse before. It's always nice to finish in front of boats like Groupama.” Free ride Ski champion Aurélien Ducroz also had a great day onboard La France du Nord au Sud, finishing third of the day and scoring his best result so far: “The conditions were a bit like in Roscoff and that's what we love! Our helmsman Olivier Backes is amazing at the helm in strong breeze, with a great precision downwind. We also had goog starts, good speed. It's a great day for us as we enter the top 10 overall and that was our objective. Now we have to stay in there.”