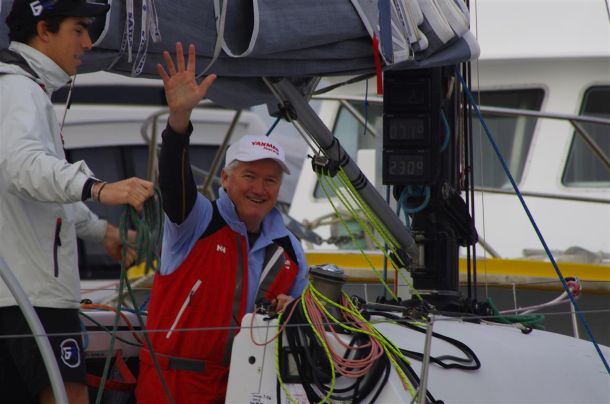 The forecast of rapidly building north westerly winds to 30 knots has led to the postponement again of the two windward leeward races that had been rescheduled for Sunday the Nineteenth of July as part of the Pantaenius Western Australian State IRC Championships.

The postponement has given time for some reflections on the competitive racing in the three divisions and double handed group during Saturday’s third race in the series the Mayflower Race.

Match racing legend and Americas Cup helmsman Peter Gilmour was a bit of a surprise when he turned up on the helm of Division One front runner the Next Factor. Peter Gilmour wasn’t the only change on the Next Factor with boat builder Peter Milner and 2013 Western Australian sailor of the year Ella Clarke joining the crew for the race and adding to the intrigue.

It was The Carkeek 47 Indian of Craig Carter that had the best of the day relishing the flat water, absolutely nailing the start, winning the battle for the inside position at Hall Mark, and after an upwind duel on the last leg beating the TP52 Calm of Tony and Astrid Mitchell over the finishing line by only one second. What adds to the intrigue of all of this is that the sailing master of Calm Andrew Harry and the sailing master of Indian Paul Eldrid attended the same school some years ago and have had so much sailing against each other over the years.

Giddy Up of Robert Halvorsen is enjoying the series so far with their third first place finish in Saturdays race to put them in a really strong position in the competitive Division Two fleet. They have been having some close racing with Joss and also within this fleet there’s the battle between the Foundations By and Large and the X Factor