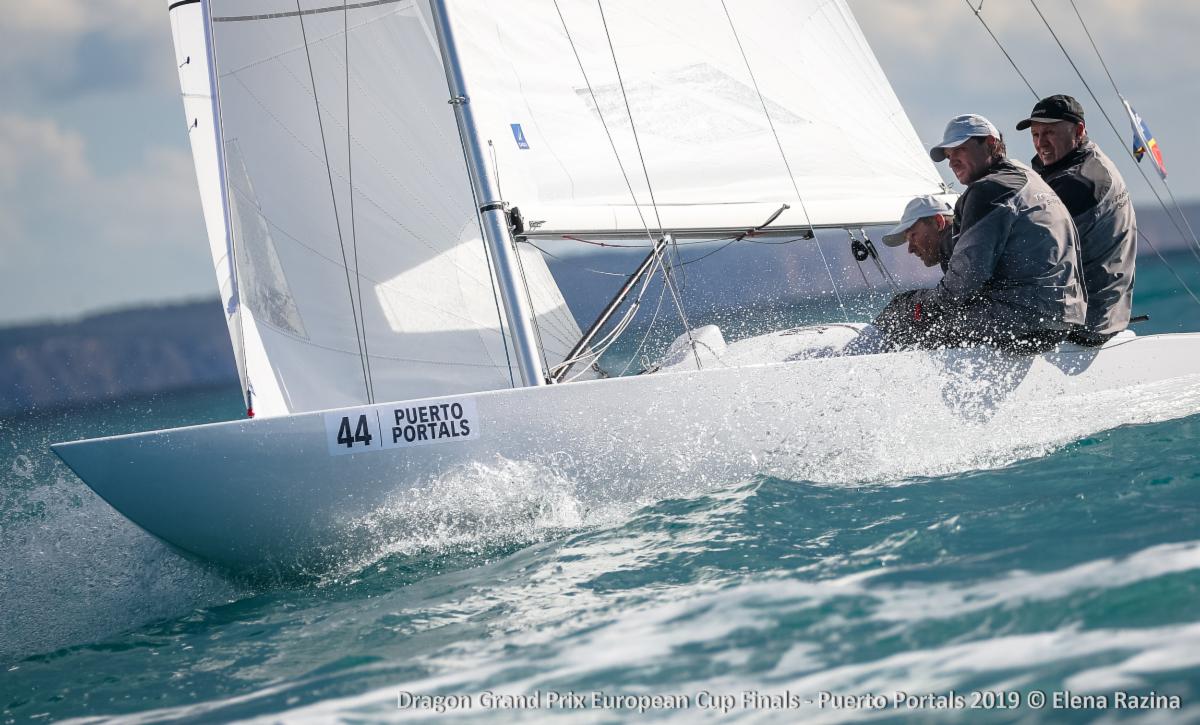 On the opening day of the Dragon Grand Prix European Cup Finals 2019, Ukrainian Olympic 470 gold medallist, Evgeniy Braslavets, crewed by Sergey Pugachev, Sergey Timokhov and Oleksandr Myrchuk, claimed the golden ticket which allows them to leapfrog past the Quarter and Semi Finals straight through to the Finals.

Over the course of four Grade 1 International Dragon regattas hosted by Cannes, Cascais, Kuhlungsborn and Puerto Portals, 100 Dragon teams have fought a season long battle for the right to claim one of just 20 places in this all new Dragon Grand Prix European Cup Finals.

A new regatta format calls for a first round of four qualifying fleet races for all 20 competitors on Day 1. The overall top 10 boats then progress into Day 2, when Quarter, Semi and Final races will decide the ultimate winner.

To add an extra frisson to proceedings, the leading boat at the end of the qualifying round gets a bye into the Final and the second place boat a bye into the Semi-Final.

Early morning rain gave way to bright sunshine over Puerto Portals and following a detailed briefing, which included confirmation that on the water judging by the International Jury would be in operation, the teams headed afloat. Bang on time at 11.00 and in a shifty 9 knots from the North West the first of the four qualifiers got underway.

With a fleet of such high caliber, a slightly reduced course size and very shifty conditions, the competition was fierce from the outset with constant place changes throughout the fleet. Consistency was hard to come by and most of the teams found themselves at both the front and back of the fleet over the course of the day.

Braslavets opened with a very disappointing 14th then rallied with a second and third, but going into the last race he was still below the qualification point. Drawing on all his knowledge and experience as a multiple Dragon class champion and Olympic 470 gold medallist, he dug deep and reminded everyone of exactly why he is one of the most respected and successful competitors in the class.

Going into that final race Germany's Nicola Friesen, crewed by Vincent Hoesch and Aleksey Bushuev, held a single point lead over the fleet. A seventh place secured her second overall and also allowed her to claim the silver ticket of a bye into the Semi Final round.

The strength and depth of the Dragon Class is world renowned and in this, the year of its 90th Anniversary, the fleet is once again demonstrating its incredible ability to evolve and remain current whilst at the same time not only retaining but enhancing its unique heritage and innate style.

There are some 3000 Dragons across 31 National Classes and four continents registered and racing regularly around the globe. That tomorrow's 10 finalists represent 10 nations and include four America's Cup veterans, three Olympians, one Vende Globe veteran, an all amateur crew, a female helm and multiple National, Continental and world champions speaks volumes about what makes the fleet so enduringly popular.

Four time World Match Racing Champion Peter Gilmour, who joined the Dragon fleet in 2018, very much enjoyed today's new format saying, “It's an interesting format where everyone was trying to get up to the top all the time.

“Some of the top boats were first and then last, but it was mainly about being consistent to get into that top 10 group so you can go forward to tomorrow. It's very disappointing for some people who didn't make it, but others are looking forward to tomorrow.

“We've had an outstanding season; all of the Dragon sailors have. For us at Yanmar Racing, it's been particularly satisfying as well. We've had some good results and a big improvement on our performance last year, so we've enjoyed it very much and the Dragon community has been very welcoming.”

Speaking after racing a buoyant Palsson said “Here we had four Corinthians qualify for the final twenty against the pros which is really great, so I'd encourage other Corinthians to come and join us next year. The sailing was great, close racing with just 20 boats on the line.

“It was very much up and down and tricky conditions today. The knock out system adds an extra dimension to the sailing and you have to be fighting the whole time. Tomorrow we will be the only Corinthians, but we will give the pros a big fight!”

The forecast for the final day of the regatta is for initially light north westerly winds which will clock round to the north east and increase as the day progresses.

The Quarter Final race is scheduled to commence at noon with each of the remaining three races expected to last around 45 minutes.